A Return to the Chronicles of Rajistan

Having found himself and his army immured in the desert market town of Hak al Kumara, Major-General Sir Grinmore Scarlett settled down to await rescue. His faith in the attempted rescue was not misplaced, but perhaps due consideration to the means available to his would-be rescuers ought to have given him pause.
The relief column had really but one route to reach Hak-al-Kumara , one easy to predict, and therefore easy to anticipate. Whilst retaining his besieging forces, General Nasr ed-Din Pasha ordered 35th Division (Duya ed-Din, reorganised since its battles several weeks before) to set up an entrenched blocking position at the point of the river that reverted to its southern course. Keeping the bulk of his Division on the more likely east bank of the Pardis River, he detailed one of his regiments to dig in on the right (west) bank, just south of the Sheikh Sa'ad hamlet, supported by cavalry and camelry, whilst his main body occupied a double line of entrenchments on the east bank. Behind this main position stood a redoubt between the equally impassible obstacles of the river and a salt marsh some distance to the east. Not only had the relief force to get by the defence works, but also the bottleneck partially stoppered by the redoubt;  and behind this bottleneck, the local commander, Bashir ed-Din could call upon the regiments of 52nd Division.
This is a continuation of the campaign begun in the middle of last year, as related in the following postings.
Chronicles of Rajistan
Chronicles of Rajistan 2
Battle of Hak-al-Kumara
The Campaign Continues
Battle of Cpistupon
On this occasion I roped in Paul 'Jacko' Jackson, who took over the side of the Ruberian (RED) relief column, as Major-General Sir Aylmer Reddington, whilst I, in the guise of General Bashir ed-Din, commanded the covering force. The rule set we used was from the Colonial Portable Wargame (Bob Cordery), specifically, the 'Widow at Windsor' rule set.  More on this later.
The Turcowaz corps comprised:

35th Division: Duya ed-Din ... 3SP
Cavalry:
Reinforcements (off table):
53rd Division: Abdullah Jemal ... 3SP
These reinforcements were scheduled to arrive on table once the first line of entrenchments had been breached.

19th Dehra Dun Brigade (Col Wm Dennys) ... 3SP
28th Garwhal Brigade (Brig-Genl Geo. Kemball) ... 3SP
35th Brigade (Brig-Genl G.B.H. Rice) ...3SP
21st Barrelly Brigade (Col G Ross) ...3SP
6th (Indian) Cavalry Brigade: (Brig-Genl R. Thered) ...3SP
Divisional Artillery:
Gunboat:
36 units, 165SP, Exhaustion Point -55SP.
As there was very little difference quantitatively and qualitatively between the two sides (the Ruberians having more artillery and machine guns), I figured that the balance would be derived from the absence of the Turcowaz 52nd Division until signalled to arrive by the Ruberians' carrying the first line of entrenchments at some point. The troops defending the east bank of the river looked woefully thin.  'Jacko' got the choice of sides, and plumped for the Ruberians.  Game on...
Supported by the massed batteries in the centre, the Ruberians advanced in dense columns, 19th and 21st Brigades towards the desert end of the Turcowaz line, 35th Brigade up the east bank of the river, and 28th Brigade up the west bank. Right from the outset the defenders did fearful execution among the attackers - a combination of formidable dice-rolling and the Ruberians' determination to close. For their part, the Ruberian artillery proved surprisingly ineffectual, not helped by the equally woeful gunnery from HRMS Shoofly.
The Ruberians' first success came upon the river bank, where a skirmishing light infantry force broke into the thinly manned part of the trench line, and forced back a battalion of 104th Infantry. That breach of the line signalled the arrival of 52nd Division, 154th Regiment on the west bank, pushing towards the Shiekh Sa'ad settlememt, the main body pouring onto the field on the east bank. 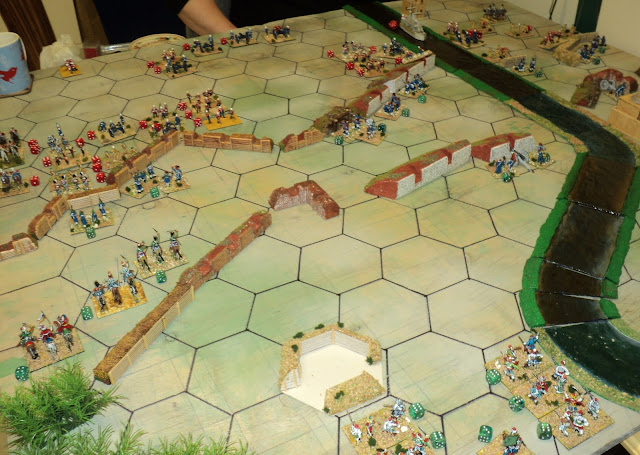 Meanwhile, the main Ruberian assault gradually weakened Turcowaz resistance. The mitrailleuse company wiped out, the two battalions of 105th Regiment were being gradually edged out of their trench lines. But General Sir Aylmer Reddington seemed reluctant to follow up, in the face of the vast numbers of Turcowaz reinforcements pouring onto the field. With no success to show on the west bank, and Turcowaz infantry reoccupying the part of the line abandoned briefly in front of 35th Brigade, the Ruberian commander acknowledged defeat and called off the attack. 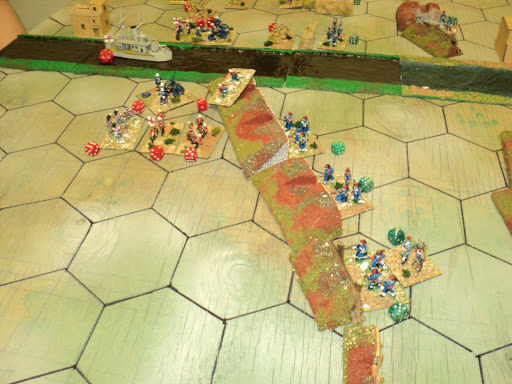 Overall I was very surprised at the result. The Ruberians had taken fearful losses, many times greater than those of the Turcowaz defenders. They might well have held even without the reinforcements. 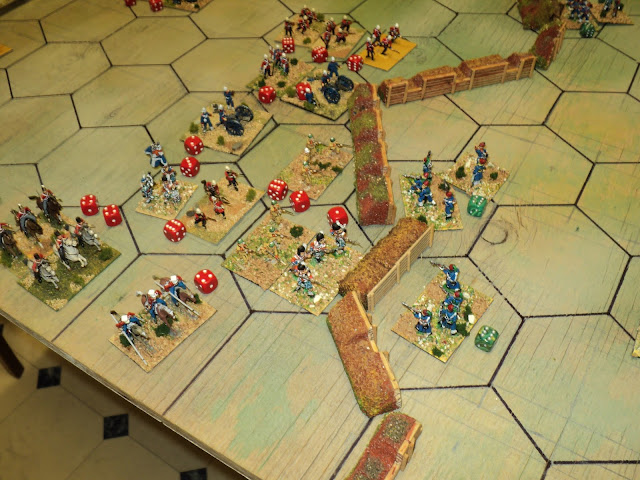 Clearly I had got the balance wrong, though for the 'purposes of history', a certain bias in favour of the Turcowaz was reasonable. The action was based upon the first attempted relief of General Townshend's Division at Kut Al Amara in 1916. There, the attack successfully carried the forward defence line, but foundered upon the blockade of the defile between the river and the marsh. 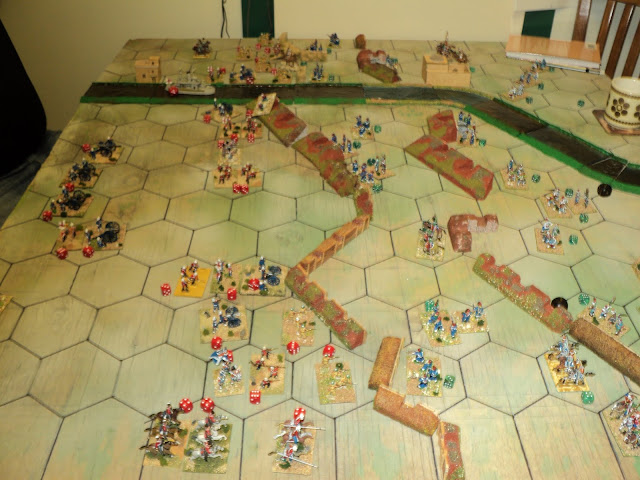 I also think I chose the wrong rule set from Bob Cordery's The Portable Colonial Wargame book. I am forced to conclude that my RED-BLUE armies are simply not set up for 'The Widow at Windsor' rule set - mainly on account of there being no good method of indicating single units (stands) in line or column - and the action would have been much better under the simpler 'The Gatling's Jammed'. This battle was supposed to have been the final in the Medifluvian Campaign series, but I think there will be just one more attempt to relieve General Scarlett's army at Hak al Kumara.
Posted by Archduke Piccolo at 4:24 PM