Last night I began and finished the final two warships for my Turcowaz (Turkish) navy.

Because the three planned Turkish vessels seemed to be somewhat outmatched by the the three Greek, methought it reasonable to add a fourth to the former to redress the balance.  Besides, the addition of a battleship called Hayreddin Barbarossa seemed to me desirable for its own sake.  It is the sister ship to Turgut Reis, though there are a number of differences to distinguish the two. 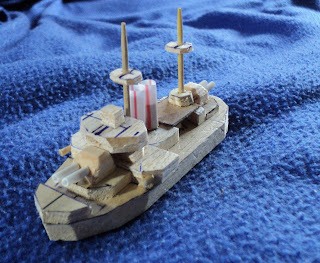 The remaining vessel is the 'protected cruiser' Hamidieh. Designed, possibly, more as a commerce raider, it is nowhere near as powerful as the other large ships in the collection.
Finally, a couple of photos of the whole collection:

Hellenic Fleet:
Turcowaz Fleet:
To continue - the third week of the First Blacklands War.
Posted by Archduke Piccolo at 3:28 PM