The second week of the war proved a rough passage for the Allies.  Both Bejelan armies had now been driven back across the border.  Such were their losses that the Bejelan War Ministry suggested to King Peter that the two Armies be converged into one.  As II Army was retreating into the eastern part of the country, perhaps I Army should join it there, and General Petar Bojovoc take overall command.  So it was ordered.

Nor was the Chervenian high command altogether pleased with events.  Ist Army had taken a most unexpected defeat - sufficiently humiliating, withal, to place at hazard the military career of Chervenia's most able general. Abandoning outright the invasion of Macedonia, the battered army staggered back into South Chervenia, very much chastened (This was decided by die roll: 1-4 = retreat to Chervenia; 5-6 = retreat into North Macedonia.  I rolled a 4). The victory of the combined IInd and IIIrd Armies had been more than somewhat pyrrhic, IInd army so badly mauled that a withdrawal into Chervenia was clearly indicated, which left only the smallish IIIrd Army still at large within Imperial borders.

What was that Army to do? The defeated Third Turcowaz Army had withdrawn into the capital, Ionople, effectively scratching that city off the list of achievable objectives. But it was yet possible to besiege or storm Adrianople. Close to deciding on that course, General Dimitriev suddenly bethought himself that perhaps there was more of interest to be done in West Thrace. No sooner thought than acted upon; westward marched IIIrd Army. (Options: 1 = Lay siege to Adrianople; 2-3 = Storm Adrianople; 4-6 = March into West Thrace.  The die roll was 6).

For all the fine performance of the Turcowaz armies so far, the situation remained perilous for the Empire. Three of the main armies (First, Second and Fourth) were cut off far to the west of the capital, but they were at least in a central position surrounded by enemies, and in far greater readiness for further action. Having barged its way though the II Bejelan and Ist Chervenian Armies, Second Turcowaz re-entered North Macedonia.

First Army found itself at something of a loose end, but with a very wide range of options:

For all his shortcomings as a commander, Nazim Pasha was no piker: he ordered the advance into Chervenia (I rolled a 6). What would be the strategic consequences of this bold move? Time would tell.
There remained Fourth Turcowaz Army, as yet unengaged, having retreated all the way from the Ionian coast almost to Salonika. There, at Khalkidona, west of the Vardar River, Halepi Zeki Pasha elected to take a stand. 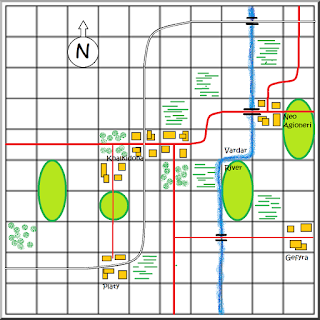 He had plenty to worry him.  Salonika was an important sea port, much coveted by the Hellenicans, that must be held.  The Hellenic Army that was pursuing him from the west, though much of a size as his own, was armed with machine guns, an arm his own army lacked.  Furthermore, to the east  behind him, so persistent rumour ran, Thrace was occupied by the enemy, and that enemy was advancing westwards. The only consolation was that Second Army was not so far distant, in the northern part of the province, perhaps in a position to recover the situation should the imminent battle go badly.
Sure enough, the Hellenic Army, out of the action so far, we more than eager to bring on a battle. The prize was too alluring to ignore.
What of the Black Mountains Army? Following its defeat two weeks earlier, that army had recovered its poise within its mountain fastnesses, and once more ventured a sortie outside its borders. Into North Abiloni they advanced, eyes set firmly upon the capture of the entire Ionian littoral to the south.
Such was the situation, when the Sultan was awakened one day, towards the end of  October, by an early morning bustle and commotion within the Seraglio. Outside in the streets of Ionople crowds were cheering as only Ionopolitans were capable of.  What news could that portend?
Posted by Archduke Piccolo at 4:14 PM