Following the Second Turcowaz Army's near-miraculous victory in Vardar, the separate Bejelan and Chervenian armies retreated rapidly across their respective borders. This left the road open for Second Army to continue its march into North Macedonia. It also left a wide range of options from which Nazim Pasha, commanding First Army, could choose.

Now the good Pasha was not the brightest star in the Turcowaz constellation of generals, but he was certainly one of the most pugnacious, judging from his decisions so far. Scorning to await events, but wary of nebulous affairs in Bejela (where his spies indicated the two armies were consolidating into one), Nazim chose to set off in pursuit of the Chervenian army. Scuttling across the Rhodope Mountain Range, the Chervenian 1st Army, led by the redoubtable Vasil Kutinchev, came to a halt near the village of Klyutch. There the Chervenians turned at bay, to face their pursuers.
This was to be no easy task for an army whose infantry arm had been badly depleted in battle. The Royal Guard Cavalry had also been seriously weakened. On the other hand, he did have his machine guns, and a strong artillery arm. The Chervenian Army comprised:

Against them, the First Turcowaz Army went into battle with:

First Turcowaz Army
14 Units; median = 7-1 ('Poor' General) = 6
46SP; exhaustion point = -16.
The Chervenians had placed their main line astride the Likvidatsiya River, a watercourse that meandered through the foothills through which the mountain pass highway descended on the Chervenian side. In one of the more settled regions were four villages, forming a rough quadrangle, the westmost of which stood upon the more gentle slopes of a hill  over which the road ran. Upon this hill, General Kutinchev had placed 7th Infantry, installing in the village itself his machine-gun detachment. This little force was intended to break up the Turcowaz attacks before they reached his rather exiguous main line. His cavalry covered the more open left flank, and half his infantry were on the right, with ideas of counter-attack in mind, should the enemy carry the village and push into the main Likvidatsiya valley. 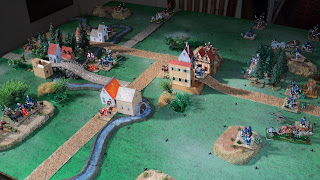 Nazim Pasha had but one idea in mind: the crush the enemy before him. His main attack, supported by his field artillery, comprised two infantry and his two cavalry regiments, who were to clear the whole field south of the river. Anticipating such a course, Kitinchev had also placed his cavalry, hoping that their better quality would offset their slight inferiority in numbers (5SP against 6).
At the same time, Gabrene village was to be stormed by the mass of the Turcowaz infantry, four whole regiments. Only 14th Infantry remained, standing as flank guard on the left. 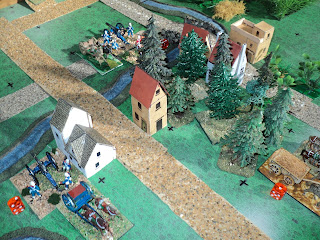 The first shots were exchanged in the centre, as the 23rd and 24th Infantry lined the woods opposite the Gabrene Ridge and began a brisk firefight with 7th regiment opposite. Advancing up the road, 13th Regiment were met by a sleet of MG fire that within short order reduced their strength by 75%. Nothing loth, 8th Regiment went in, closed right up to the town, and at the point of the bayonet pitched the machine gunners out of the place.

Charging through the village, the attackers were halted at the eastern edge. In the resulting scrimmage, the machine gunners were reduced to half strength, but managed to force their assailants, with loss, out the far side of the village.  Meanwhile, the firefight had reduced the strength of 7th infantry by 25%. (Considering just 6 stands were involved, this was proving quite a bloody little fight, though the Turcowaz in the woods had as yet suffered no loss.)
In view of the lack of pressure against his right flank, Kitinchev bethought himself that his own troops in that sector might try their hand against the Turcowaz left. Finding a ford to their front, 1st Royal Guard began to cross, as the accompanying field artillery drew up to the bank. Fourth Regiment could find no ford across the marshy river as it looped around Scrat village (decided by die roll, 50-50 call), and so prepared to cross instead by the river bridge. 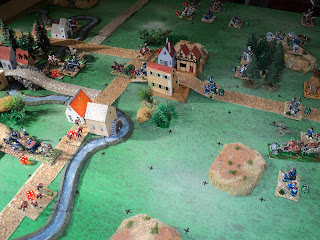 The scrap in full swing around Gabrene village, on the left flank the Chervenian cavalry charged the advancing Turcowaz. Already galled by gun and rifle fire that had caused both units some loss (1SP from both units, for no loss to the enemy from the Chervenian artillery), the Chervenian horse hoped to reverse the fortunes of the day.
All Chervenian counter operations were insufficient to save the situation on Gabrene village, however.  Briefly reoccupying the village, the machine gun company were very soon compelled to give it up. Back they went, down the road - ahead of them the former defenders of the ridge, for whom the incoming rifle fire had also been too much to bear. Altogether, in inflicting 4SP loss to the attackers, the defenders had taken 3SP loss. General Kitinchev thought that not too exorbitant an exchange. Neither did Nazim Pasha. 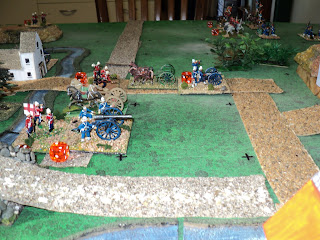 The loss of Gabrene village rather put a damper upon any notions of counter attack by the Chervenian right. First Artillery and 4th Infantry turned their attention southward, against the flank of ant Turcowaz advance from the village. First Royal Guard infantry were left for the duration high and dry on their own, engaged in a desultory hilltop firefight with 14th Turcowaz Regiment, whilst the real battle was fought elsewhere.

Having taken Gabrene, and the ridge upon which it stood, Turcowaz infantry began from that place to pour a heavy rifle fire down upon the artillery lining the riverbank. This turned out to be not the best location the Chervenian medium artillery could have chosen.

By now, the Chervenian southern flank was beginning to crumble. The untrained Second Cavalry melted away, and although the veteran Guards lasted much longer, they were caught in an invidious position of having to fight where they stood, or run a gauntlet of rifle and gunfire were they to try and break off.
In an attempt to mitigate the galling fire from Gabrene ridge, 4th Infantry essayed a counter attack against the village supported by 1st Field and 5th Medium Artillery. Nothing came of it. 8th Regiment were in the village to stay. From henceforth, the Turcowaz right-centre push became a steady progression.
The Royal Guard Cavalry (0SP) scattered, and although 7th Infantry joined 2nd Royal Guard to try and hold the line at the point at which the river bent eastwards, Turcowaz now had the numbers. Both sides had field artillery available, though the Turcowaz 1st Artillery was forced to move up in order to bring the new defensive line within range. In the centre, steady and accurate rifle fire silenced the machine gun company and medium artillery, despite the damage caused to 8th Infantry in the village.  There was nothing more to be done.  General Kutinchev ordered the retreat to be sounded.  Yet again, Turcowaz had won.

The result of this battle caused shock waves to run through the whole of Europeia.  Azuria's Paris Firelighter railed against a resurgent Settee Empire; the Berlin Blatter wrung hands at the role Grauheim's military advisors were playing in Turcowaz's string of victories; the Zelenian Letopisanie began to adopt a tone rather different from their usual philippics against the Supreme Door. What was worst from the Chervenian perspective was that losses, heavy as they were, were inflicted across all arms. They amounted to 7,500 altogether; Turcowaz lost 4,500 only. Tactically, the victory was decisive.

(Side Note: despite the difference in strengths, I didn't give the Turcowaz much chance in this action, especially when 13th Regiment right at the beginning of the action was repulsed with 75% casualties. At one stage the MGs had inflicted 4SP loss for none received.  But the real difference lay in the quality of the generals - or at least, that was my expectation. But Nazim Pasha (the 'poor' general) outshone himself with a fair number of high activation rolls (though there was more than one low roll as well!), and General Kutinchev (the 'good general') had a few low rolls. Overall Turcowaz lost 8SP Infantry and 1SP of  Cavalry; Chervenia 5SP Infantry, 5SP cavalry, 5SP artillery and MGs - 15SP altogether.)

But the strategic implications had yet to be decided. Having pushed into Chervenia, there was some doubt as to whether First Turcowaz Army could get itself out again. It seemed unlikely that Nazim Pasha would pursue the enemy into Sofia, not with a second Chervenian army - a larger one - somewhere loose in the province. 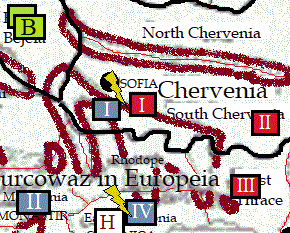 Strategic situation of Turcowaz First Army
In Ionople, the news sheets and bulletins were full of the victory over Chervenia - for a few days, at least. Then, right at the beginning of the fourth week of the War, came the tidings of a great sea battle off Gallipoli, which wiped from the minds of nearly every Ionopolitan all thought of the War on land.

To be continued.  Rather than begin the fourth week with the strategic situation and moves, I thought I'd start with the sea battle (since it has already been fought, and no doubt readers are all agog), and then revert in the posting after that the Fourth Week moves and counter-moves.
Posted by Archduke Piccolo at 2:24 PM