This is a bit of an inter-acte waiting for the next series of battles.  Following publication of the recent  Blacklands War naval action off the Gallipoli Peninsula, the thought arose concerning adding a little 'chrome' to the naval rule set I was using (Gridded Naval Wargames, "Pre-dreadnoughts ... in Action").  Bob had added in his book an example of how damage might be recorded on each ship during the course of a battle.

What follows is a bunch of ideas along these lines.  They have yet to be play tested, and some of them I'm not sure will make the cut into a final rule set.

It seemed to me that, given the variations in design of the ships I've built so far, that I'd have to draw up diagrams for all of them.  I even considered varying the number of hull and waterline 'cells' according to the flotation 'endurance' of each vessel.   To my mind that appeared to represent a lot of work, each time I wanted to play a game.

A rethink from 'first principles' (whatever is meant by that) led to my coming up with a 'standard' elevation and plan schematic good for any and all vessels, from torpedo boat destroyers to modern pre-dreadnought battleships, but with departures from the standard resolved by other means - possibly dice. The above picture is a good representation of ships the type of Georgios Averof and Lemnos. Whenever a '6' is rolled to register a hit on a vessel, a card is drawn, with its value and colour - sometimes its suit - determining where on the vessel the shot hit.  A '5' also counts as a hit, starting fires and generally reducing the target's endurance, but without any specific damage.

The bottom row of the hull in the diagram (i.e. cards 2-5) represents a waterline hit, costing 2 flotation points (all other hits represent 1 FP, plus local damage).  By the way, I discovered a small hitch in Bob's diagram: he forgot that a 'one' card in a standard deck is in fact the Ace.

Now, a vessel like Turgut Reis has three main turrets.  Suppose a hit was scored, and we drew a Queen, representing a turret knocked out. Instead of determining which by the card colour, roll a die, with the effects:
In several battle accounts one reads of a single main gun still in action aboard a badly battered warship.  It is simple enough to extend the list, for twin-gun turrets, if you want:
A: Georgios Averof:
B: Hayreddin Barbarossa: 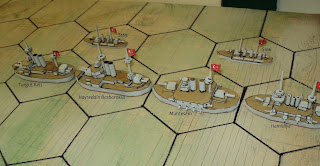 I reckon that a card, once drawn and the damage assessed, must be shuffled back into the deck.   This might lead to the same card being drawn a second time.  That should be fine.  Its effect upon flotation is the same, and it compounds partial damage - e.g.  a partly damaged turret is altogether knocked out.  A second waterline hit in the same spot as an earlier hit incurs the same flotation loss.

The strange gun arrangement of the Hydra class ironclad battleships can easily be sorted.  A Queen represents a hit on the main armament; a Jack, a hit upon the secondary.  Dice rolls determine as follows:
Primary Armament:
Secondary Armament:
These need not be written in stone - merely illustrate ad hoc methods of tweaking the main set of rules to accommodate design differences.   One need not in my view even maintain a 'ship's card for each vessel, but keep a log of damage and status.

Torpedoes, then.  If they hit, they can be only waterline hits, or damaging to the screws or the rudder.  I'd suggest that of a 'pattern' of three dice, as called for by the parent rule set, only a '6' counts as a hit, 2-5 representing hits along the waterline, a '1' striking the rudder (affecting steering) and a '6' striking the screws (affecting speed).  I'd also suggest that any torpedo hit does 1D6 flotation points of damage.  Very chancy things, torpedoes!

These are ideas based somewhat upon the Gridded Naval Wargames chapter, 'Mimi and Toutou Go Forth'. They have yet to be play tested.

When determining gunnery effects, only '5' and '6' count for hits.  Hits on a '5' count for 1 FP reduction only.  When a '6' is rolled, the target's FP is also reduced by 1, but card is also drawn randomly from a standard deck, which will include one Joker.

Now, I really would value some comment on what I've suggested here.  Is it altogether too much?  Perhaps I've overlooked something.  I hope to do a little bit of a play test soon, to see where this goes.

To be continued...
Posted by Archduke Piccolo at 5:38 PM