Taking a little break from the Blacklands War - a naval action has been fought and the AAR (there will be two postings) in train - I felt the urge to try out something I've occasionally dabbled in in the past. It is, in effect, a 'map game', similar to those reported on in the Blunders of the Danube and Murdoch's Marauders blog spots. There have some interesting essays of this kind in the Facebook group Shambattle and OMOG Toy Soldier Games, as well. The most recent has been a version of the Shambattle 'campaign' set in the eastern theatre of the American Civil War.  Here is a picture of the basic Shambattle map (see the Shambattle site for rule set etc). If you check out the images after Googling 'Shambattle', you see several examples.
However, having my hex-table up (having fought out a Blacklands War naval action shortly before) I thought I'd try out something a little more elaborate. The land to be fought over purported to be a region subject to a border dispute between Ruberia (RED) and Azuria (BLUE). Negotiations broke down over the dissatisfaction of both with the Sluggard River being the 'natural' frontier separating the two countries. To make up this territory, I scattered about some rarely used buildings especially the ceramic ones picked up several years ago from a 2-dollar shop. There followed an extensive road network, a large river crossable at four points, and several forests and points of high ground. One, Barnaby Ridge, earned its name by having a considerable battle fought over it.
The armies comprised the figures from the Age of Imperialism board game, gifted to me by Brian O'Sullivan (A Fist Full of Plastic blog).  The armies were identical, organised as follows:

I - V Army Corps, each with

- 1 gun with explorer or surveyor figure as gun crew;

I - II Cavalry Corps, each with

I could have used the Shambattle rule set, and probably ought to have done, but I wanted to revisit some ideas I was exploring several years ago along these lines.

5A. An army still in column of march, attempting to force a defile (e.g. a bridge), or attacking a town
halves the standard number of combat dice.

Having rolled the dice, each die score is cancelled by a same score by the other, until only the unmatched scores remain.  The remaining hits then result in figures being removed.

8 (Recommended).
At the end of each move, or perhaps a fixed number of moves (IGoUGo pairs), the losses are totted up on both sides, and each receives back, for each arm, the lesser of of the respective sides' losses.  These are distributed among the units as the player sees fit.  There ought to be some maximum that a unit can not exceed.  I suggest 4 infantry, 2 cavalry and 2 guns for an 'Army Corps', and 5 cavalry for a 'Cavalry Corps'.  (I didn't actually use this rule, but it might serve to reduce the attritional effects.  See also the end of this posting).

8.  Units that receive more losses than they inflict in terms of numbers of units, must retreat one grid area.

The war opened with the Azurian Army marching into Lazia, the disputed border territory in the Sluggard River valley. From east and west, two roads entered the region. On each side, the right-hand columns comprised I Cavalry and I, and II Army Corps; the left hand II Cavalry and III and IV Army Corps. The V Army Corps of both sides (decided by die roll for both) entered by the Centreville road. 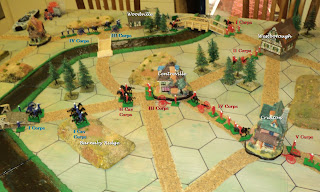 The first clash was a cavalry skirmish just east of the Woodville bridge, in which the Ruberian horse were driven back across the river. The Ruberian I Corps forced their way across, driving off the Azurian cavalry, but were stopped by the Azurian III Corps coming up from Woodville.  In the ensuing Battle of Woodville Bridge, the III Corps were victorious, and drove the Ruberians, across the the river and back into Westborough. 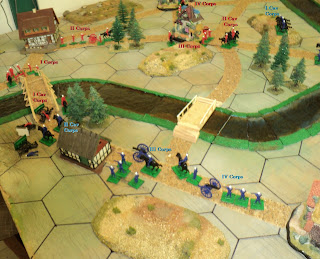 A more considerable battle developed as the Azurians attempted to force a bridgehead on the west bank of the Sluggard River, near Waterton. I Cavalry Corps seized the heights of Barnaby Ridge, where, before the Army Corps could come up, they came under attack from III and IV Ruberian Corps - the II Cavalry having swung off onto the Centreville-Woodville road to cover the bridge crossing there. The result was heavy losses to III Corps, but the Azurian cavalry was left much depleted.

The next few pictures show more of the developments described so far... 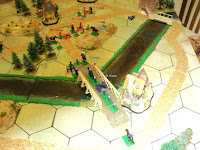 At about this point I omitted for  a whole turn to take pictures of the Battle of Barnaby Ridge. This was something of an Azurian victory, with Ruberian III Corps being left badly mauled. They fell back to the outskirts of Centreville, where, along with the newly arrived V Corps, they formed a new line along the Centreville-Bridgeport road. II Army Corps lay behind Centreville itself, whence it was later to replace the depleted III Corps when the latter was withdrawn from the battle line.
Meanwhile, the Azurian V Corps had swung off upon the Bridgeport road east of the river. The plan was a species of double envelopment, with this corps crossing the river at Bridgeport to fall upon the Ruberian left flank, whilst IV Corps, crossing the bridge east of Woodville, approached the main Ruberian Army from the south. Probably unfortunately, the main Azurian Army (I Cav, I, II Army Corps) attacked prematurely. 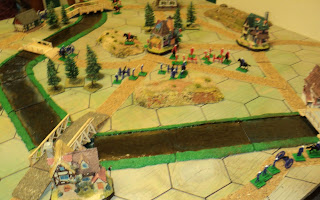 The Azurian IV Corps soon enough forced the river crossing against the enemy II Cavalry Corps, which fell back to the heights immediately south of Centreville, covering the flank of the main army. V Corps were even more distant when the Azurian central corps launched their attack. The initial result seemed promising. Azuria's II Corps routed and destroyed the remains of Ruberia's III Corps;  and V Corps were being held by the exiguous remnants of I Cavalry Corps. The fighting between I Corps and IV Corps remained inconclusive after a day's fighting (one IGoUGo turn). 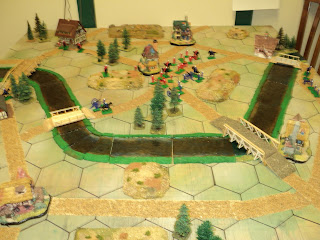 At about this point, the Azurian run of successes came to an end. The fresh Ruberian II Corps suddenly attacked out of Centreville against a somewhat worn down II Corps, IV Corps presented an implacable front against all enemy attacks, and V Corps freed themselves from the toils of the enemy cavalry.  South of Centreville, II Cavalry Corps fended off Azurian attempts to force the heights. The battle between the respective II Corps ended with heavy losses to both sides, but the Ruberians kept its hold upon the town. 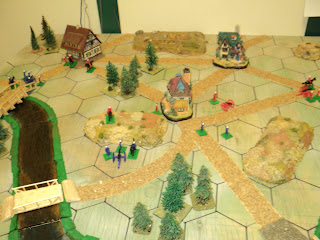 With no more to be apprehended from what remained of Azuria's I and II Corps, V Corps marched off to oppose the Azurians crossing the river at Bridgeport. Catching the enemy Corps astride the river, the Ruberians smashed the Azurians on the near bank.
The check at Centreville and the defeat at Bridgeport was enough to bring the Azurians to the negotiating table. Their early victories at Woodford Bridge and Barnaby Ridge had been largely neutralised.
Losses had been heavy on both sides:
Azuria - 6 infantry, 9 cavalry, 3 artillery
Ruberia - 11 infantry, 7 cavalry, 3 artillery.

Had reinforcements been brought in at this point, the armies would have comprised

It might have made for an interesting continuation of the war!

Posted by Archduke Piccolo at 4:40 PM