The arrival of the Hellenic battleship HNS Lemnos and the destroyer HNS Aetos complicated matters for Admiral Basmati Reis. About to cross the 'T' of the HNS Leon and HNS Spetsai pair, TNS Muhtesem found itself caught between two fires. Ordering the forward main turret to engage Lemnos, Sea-Captain Kaplan Zambak maintained the vessel's major action against Spetsai. A lucky shot from the very first salvo from the fore turret knocked out a gun from the Lemnos fore turret, for no damage - yet - in reply. As the opposing courses of Muhtesem and Lemnos soon brought them abeam of each other, the former's after turret swung round to engage the more powerful Hellenic battleship.
At the same time, the pair of Turcowaz destroyers darted in upon the larboard side of Lemnos, engaging Aetos with gun fire, and unleashing patterns of torpedoes at effective range against the larger target.  Aetos took a critical hit, but worse was to come. Two torpedoes slammed into the battleship's port side.
But Lemnos had been handing out a few licks of its own.  Three shells struck Muhtesem, two along the waterline, punching large holes and starting fires.  The ironclad's return shooting did some minor damage to Lemnos and to Leon.  The duel between Hayreddin Barbarossa and Spetsai ought to have been heavily weighted in favour of the Turcowaz battleship, Spetsai having lost its starboard side main gun.  Yet both scored a single hit only.  Unfortunately for the Hellenic vessel, the after turret was now knocked out, leaving the vessel with just the larboard main gun.
The battle was rapidly developing into a free-for-all melee, but the Hellenic ships were having an appalling run of luck with their main armaments being knocked out. The torpedo damage proved especially serious for Lemnos, flooding several compartments, and starting fires that rapidly spread too close to the turret magazines. The forward main turret was finally knocked out, but the after turret went the same way.
NOTE: It seemed to me plausible that a torpedo hit might compromise a gun turret, though I am
considering a different treatment for torpedo hits in future. At any rate, in assessing the damage, I drew two queens, a red and a black (you wouldn't read about it, except maybe here!). The red queen finished off the forward turret.  The black signified a hit on the after turret. A die roll determined the damage: odds, one gun knocked out; evens, both guns knocked out. The die roll was a '6'. HNS Lemnos was now altogether without its primary armament.

By now, the damage to Leon was such as to leave that destroyer in no case to continue the fight. It began to creep off to the west.  Turning away from Lemnos, Muhtesem placed itself between Spetsai and Leon.  For their part, the Turcowaz destroyers swung onto a course sou'east by south, which placed them astern of Lemnos.  Hayreddin Barbarossa found itself between Lemnos and Spetsai, but able to engage the latter with only its after secondary guns.  So far, as ordered, Hamidiye was staying out of the battle, but was coming under the attention of Aetos, and still in range of Lemnos's forward lighter armament.
The Turcowaz gunnery from Muhtesem was remarkably improved.  The larboard 5.9-inch broadside settled accounts with Leon, which, screws still turning, set course for Davy Jones's locker.  The forward 9-inch main gun also put one aboard Spetsai; every little helped.  In return, Spetsai could engage Muhtesem with only its five-point-nines, but managed to give as good as it was taking. On the other hand, its fire against Hayreddin Barbarossa, despite nothing coming back the other way, proved ineffective. 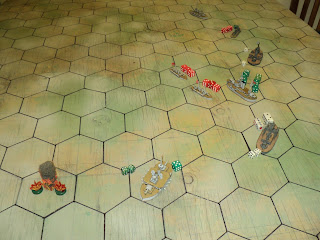 The two Turcowaz destroyers and battleship were devoting all their attention upon Lemnos - and making very little of it!  Numune and Gayret let fly with their torpedo patterns; none hit.  Of Hayreddin Barbarossa's powerful 11-inch battery, but one hit struck its target, holing the Hellenic ship close under the forward main turret, and starting new fires (the 6-spade - which would have knocked out the magazine).  The sparse return fire did none of the three Turcowaz units any damage.
TNS Hamidiye was rather less lucky.  Its pursuit of the Turcowaz cruiser carried Aetos directly astern of that vessel, whereat, firing off its torpedoes, scored two hits.  One did considerable damage to the steering, whilst the other also struck under Hamidiye's counter.  At once the cruiser lost speed.

NOTE: The cards drawn for damage were Red Ace (steering) and Black Spade (funnel).  Now, a funnel hit went to reduction in speed, but it is hard to see a torpedo striking or doing damage to a ship's funnels.  So I presumed perhaps some damage or flooding to the engine room or perhaps to the vessel's drive systems.  Whatever the damage, Hamidiye was reduced to 2 hexes, maximum speed. Its attempt to fend off the destroyer's attack registered one hit that started a small fire near its stern.
If the Hellenic vessels were having ill luck with their main guns, starting with Hamidiye, the Turcowaz began to experience ill fortune with their motive power.  As the battleship duel continued on nor'west by north, Muhtesem, heavily damaged and an after primary gun out of action, began to crawl off to the sou'west by south, and out of the battle.  The Turcowaz destroyers altered course from sou'east by south to due east, coming under Spetsai's stern.  There they launched their last torpedo salvos.  Although Gayret was holed along the waterline, its torpedo tubes were unaffected.
Both scored hits.  Struck under its counter, Spetsai took further damage to its after turret, and to its screws (Actually, I made a mistake, here: the hit ought to have been to its steering.  As 'ruled' the vessel was slowed to 1 hex per turn - a crawl - rather than being forced to carry on its nor-west by north heading until a repair could be effected).
The main action was becoming a deadly, ding-dong duel.  Before the torpedoes struck, Spetsai's superb gunnery from its one remaining 10.8-inch gun and its forward secondaries caused considerable damage to the Hayreddin Barbarossa (4 flotation points - including the waterline hit - Black-4).  But the Turcowaz battleship's secondaries did some damage in return (I seem to have omitted to draw for the effect of that!).  Much to the elation of its crew,  the main guns began to score more effectively upon the heavily armoured Lemnos.  Yet another hit registered upon the much battered forward turret.
Lemnos managed a couple of minor hits upon the Turcowaz battleship - (that vessel had lost 6 flotation point this turn alone!).  Within range of Hamidiye, the starboard side forward secondaries scored no hits.  The duel between Aetos and Hamidiye for the moment caused no damage to either side.  This was far more to the chagrin of the Turcowaz gunners, as Aetos began to draw up to fire off another round of torpedoes.

By now, the combatant vessels were becoming widely scattered.  Having exhausted their torpedoes, the Turcowaz destroyers began to withdraw from the action, circling around onto a nor'east by north heading, away from the fighting.  Muhtesem had also taken itself off, and was disappearing over the horizon towards the mouth of the Dardanelles strait.  So was Spetsai in the opposite direction, in a near sinking condition and speed much reduced.  She still had a secondary broadside available, and before drawing out of range, managed a score a seriously damaging hit upon Hayreddin Barbarossa, that caused major damage to its steering.  Out of range of its own puny secondary armament, Hayreddin Barbarossa had no reply.
Instead, the Turcowaz battleship took out its vengeance upon Lemnos. A deadly accurate salvo punched several holes along the Lemnos's waterline (7 flotation points gone in one salvo!).  Lemnos managed a couple of hits in reply, but that vessel was surely wanting its lost 12-inch guns!  Out of range of Lemnos's guns, the duel between Hamidiye and Aetos was entering its final phase.  The Turcowaz cruiser slowed by damage to its motive power, Aetos was able to head-reach upon her.  Drawing abeam of its quarry, Aetos let go its torpedo broadside.  One torpedo slammed into Hamidiye's tortured stern, damaging the screws and reducing its speed to a mere third of its normal capability.
But Aetos now ran out of luck.  Just as its torpedoes struck, Hamidiye's gunfire reduced Aetos to a sinking wreck.  Freed of the attention of enemy warships - the destroyer sunk and out of range of Lemnos's 8-inch guns - Hamidiye was able to crawl off to the north to deal with the damages to its speed and steering.
But two vessels remained in action, and it was not looking good for Lemnos.  Both Hamidiye and Hayreddin Barbarossa had been reduced to a crawl, and Lemnos at least was able to maintain its cruising speed, but for some time it remained within range of the Turcowaz heavy guns - and of the secondaries.  Lemnos received a hit that put the vessel dangerously near to sinking, and decided Admiral Poliomyelitis to withdraw from the action.  As the Turcowaz battleship lay between Lemnos and safety to the southwest, and the Hellenic vessel was embayed into the bargain, its chances of escape seemed problematical at best.
Luck came to the rescue at last.

A critical hit knocked away Hayreddin Barbarossa's forward funnel, steam pressure dropped to near-zero, and most powerful vessel in the Turcowaz navy lay dead and wallowing in the water.  It would take several hours before she could be got under way again.

Meanwhile, with nothing to disturb them, Hamidiye's crews managed after several hours to make repairs to the rudders, drives and screws to enable them to carry on the cruise that was the objective of the battle.  For their part, the prevailing good weather overnight and well into the next day enabled the crippled Hellenic warships to drag themselves to safe anchorage at Limnos island, and the equally battered Muhtesem and Gayret to the Dardanelles.  Once more under way after several hours, Hayreddin Barbarossa followed them.

This was probably the most exciting naval wargames action I have undertaken, and I speak as the former commander German 2nd Torpedo Boat Flotilla in a WW1 naval campaign played in Wellington, some 35 years ago.  That flotilla became known as the 'Death's Head' Flotilla on account of its success in several actions against the British Grand Fleet.

It was an undoubted Turcowaz victory: its main objective achieved (the breakout by Hamidiye), and the secondary (destruction of the Hellenic fleet) very nearly so.   It was strange, though, how critical hits seemed consistently to affect the Hellenic gunnery and Turcowaz mobility.  What follows is a Damage Log, copied from list compiled by executive officers aboard the respective flagships:

Next time: the Siege of Scutari.
Posted by Archduke Piccolo at 5:45 PM