Bailey Bridge - and other aquatic things... 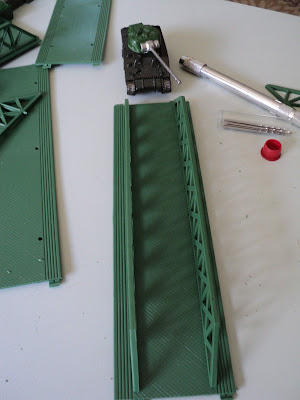 A recent posting on one of the Blogs I follow had a little piece on Bailey bridges. This of course reminded me a some grossly neglected pieces of equipment in my own inventory: several spans of Bailey bridge. 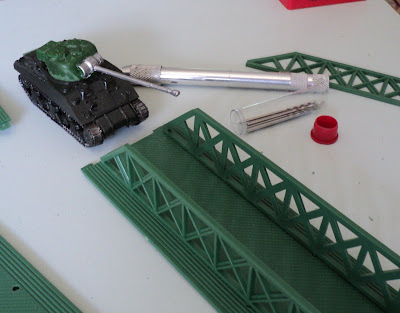 Now, the thing with this Bailey bridge that I had, was that once its girders were put in place, they [a] tended to flollop about and come adrift, and, which was worse, [b] left too little margin for tanks to be placed upon the deck of the bridge. 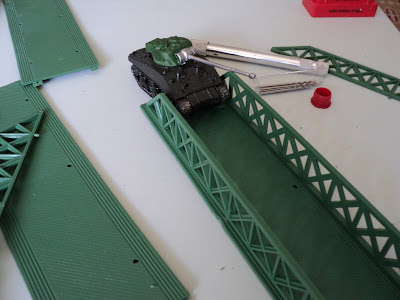 So the thing sat in my drawer for quite some time until this article inspired me to do something about it. First on the agenda was to widen the usable deck. Now, I infer from the original design that the thing was designed such that the tanks would use the deck between the girders, the infantry the outer margins. Too bad: I needed it for tanks. In these pictures, the AFV you see is an Airfix Sherman with its turret replaced by a resin Firefly turret with metal gun and mantlet. These resin pieces were made and sold on a semi-commercial basis by local wargamer T. Ormandy, who does quite a few kits for adapting or improving kits, and produces good and useful terrain pieces as well. Yeah, it's a plug - quite unsolicited - but consider it a heads up. 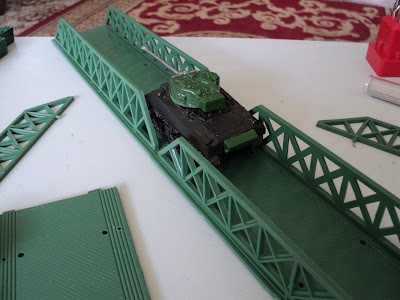 The bridge widening process was a simple matter of drilling holes nearer the edge. Being a cautious sort of dude, I began with small 'starter' holes, before reboring them to the size to accommodate the girders. No problemo. 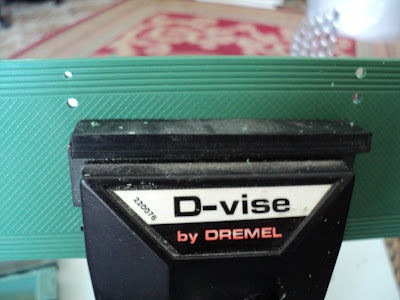 The next few pictures show how the 4 spans I have look crossing a large waterway. 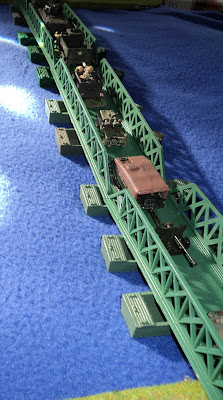 Don't look too foul, eh? True, the bridge and the barges could use some painting - we'll have to work out what sort of colours we are looking at there. Any thoughts? 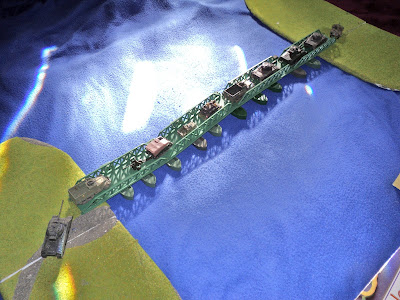 Here are the barges that come with the bailey bridges. Several are softish plastic, the bright green ones are hard II think one or two of the olive coloured ones are as well. They can of course be used as the barges for earlier bridging trains, or even as transport barges. None will accommodate many figures, but that's just the sort of logistics problem that can make campaigning such fun. All the same, with 12 barges, if each can take 3 figures, I can put upon the opposite bank a whole 36-figure battalion of foot in one trip. Sweet as... 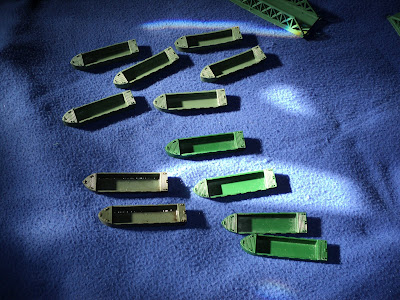 Continuing with the amphibious theme, here's my collection of inflatable assault boats. There are 4 small motorised boats, 4 larger ones the capability of mounting an outboard motor, and 4 that would have to be propelled by paddle, or towed. In Command Decision terms, it's probably a stretch for those small towing boats to accommodate more than a patrol stand on their own, but that and a towed boat - or two boats could probably carry an infantry stand, or possibly some battalion asset such as mortars, MMGs, and possibly very light guns (37mm anti tank or 7.5cm infantry gun) at a pinch. The larger 'motorised' boat I would allow (very generously) to carry a whole infantry stand. 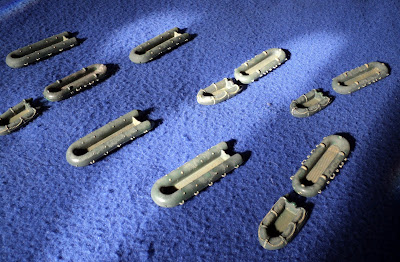 With this many carriers, you should be able to put the bulk of a battalion across in two trips (8 stands the time), assuming an uncontested crossing. 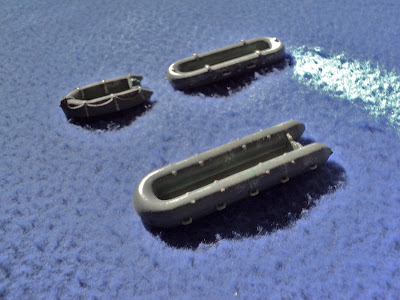 Finally a half dozen transport barges I made for my 18th Century armies about a thousand years ago. Before I got my Bailey Bridge anyhow. Crude they are, but serviceable. I've never had the heart to ditch them. These I did think about crewing with some vaguely nautical figures, but never got round to it. Having plenty of figures left over from my Revell 30YW Artilley boxes, methinks we should be able to put at least one of these fellows aboard the little green plastic barges, and perhaps more substantial crews aboard the others. 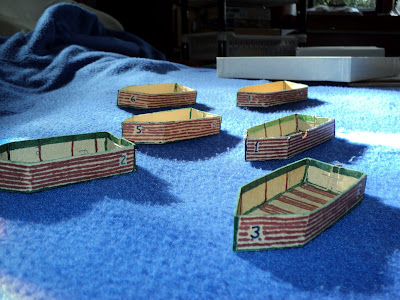 The idea of mounting small cannon in the eyes of some of the boats has an appeal, too... Oh yes: I still have to make some bridge appraoaches for my Bailey Bridge. Plenty to think about.
Posted by Archduke Piccolo at 3:43 AM