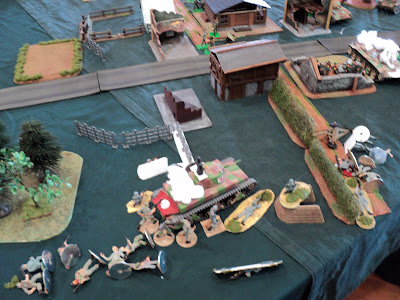 My apologies to readers about the long hiatus. Partly this has been due to disruptions owing to Earthquake repairs and some home renovations on my own account. We are only just slowly getting back to something approaching normalcy here. Soon I'll be able to figure out where I put my wargamery stuff...

At any rate, we left the Raesharn Drive on Nazpu at the starting gate, ready to thrust forward, break through the Kiivar line, carry, seize or take the city of Nazpu, and thus deliver a knockout blow. 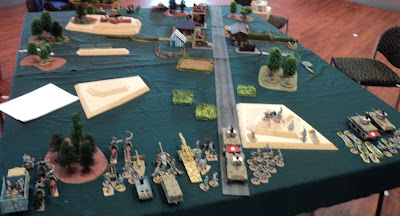 Elements of the Raesharn 44th Armoured Division, ready to roll. Having seen plenty of action already, and with the rains of winter approaching, the Raesharn forces are nearing exhaustion, its units and formations depleted... 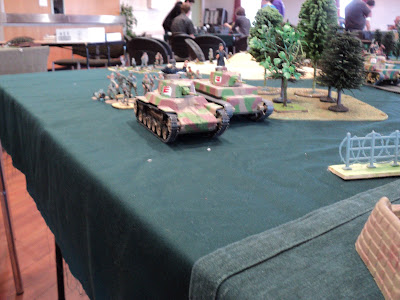 Nr 1 Squadron, 144th Armoured Regiment, advances rapidly on the right with strong infantry support. Kiivar defences were to take a heavy toll of the foot, but the Raesharn armour pressed on without them. 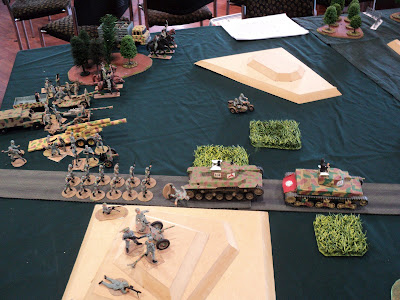 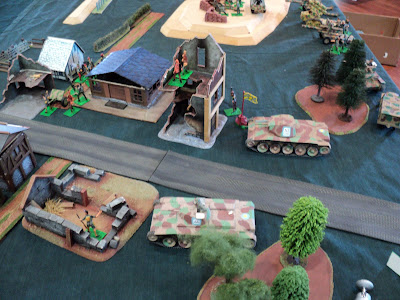 Kiivar light tanks and anti-tank guns wait apprehensively in the village. Although hidden down their side street, the AT guns have no protection other than what might be afforded by the passive barbed wire and mines in the fields east of the place. 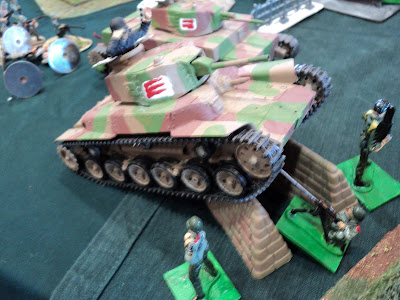 Raesharn armour avenges the loss of several infantry by overrunning a machine gun nest. Although Tank 2 was lost to AT Rifle fire, Tank 3 also overran the Kiivar anti-tank gun. 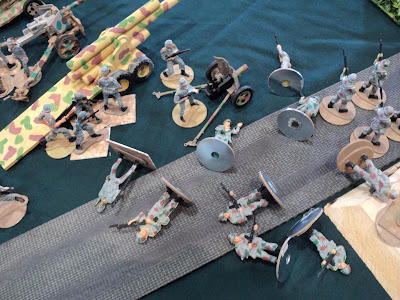 The aftermath of a very accurate and destructive stonk by Kiivar artillery. A single gun doesn't usually do much damage, but 3 guns in battery can be devastating. Two-thirds of #2 Squadron's infantry support bit the dust, right here. 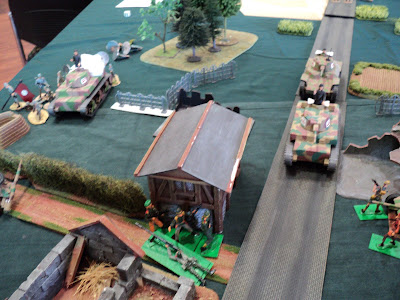 Raesharn armour boldly pushes ahead, despite the faltering infantry support. Nr 1 Squadron's surviving tank plunges on to envelop the Kiivar left, whilst Nr 2 Squadron presses into the town apparently careless of the likelihood of Anti-tank defences. Almost cut off, elements of Kiivar's 2 Section fall back through the buildings, and set up an anti-tank rifle in the side street. 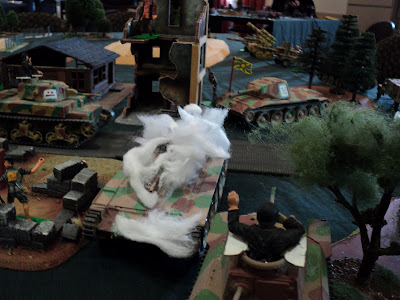 A tank vs tank duel develops at the western end of the village between Tank 3 and a Kiivar light tank - quickly settled in Raesharn favour. All day the Kiivar anti-tank fire proved largely ineffective (in stark contrast with its artillery!). Meanwhile, on the Raesharn left flank, a light weight cavalry attack developed slowly and was swiftly and destructively seen off by Kiivar machine guns. Altogether, 1 Section had a much easier ride than 2 Section did! 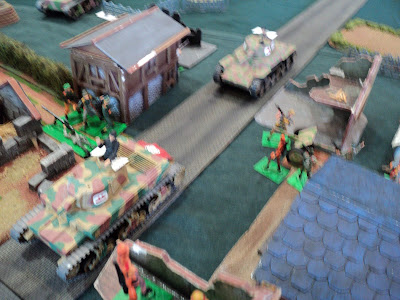 Raesharn tanks roaring down the Maserati main street simply shrug off the attentions of the Kiivar anti-tank weapons. Facing the wrong way (looking out for Raesharn's First Squadron) the anti-tank rifleman was lucky not to attract enemy attention... 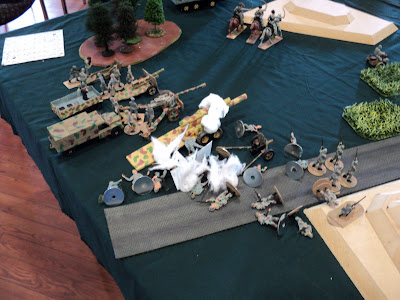 Kiivar counter-battery: very effective, as it gradually ground down the more powerful Raesharn ordnance. They in turn did very little all day. 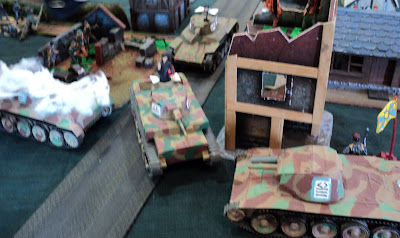 As the surviving Raesharn infantry continue to struggle forward against stubborn Kiivar resistance, the Raesharn armour were in the process of breaking through the village altogether. First Squadron had finally succumbed, but 2nd Squadron were getting the better of the Kiivar armour. 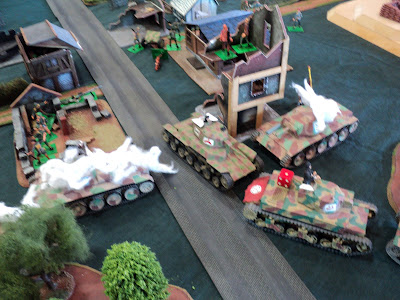 The tank battle ends in total victory for the Raesharn heavier armour, for trivial damage received. But behind them, Kiivar infantry continue to occupy the village buildings, and the FO team to direct their guns with effect. Unthreatened by enemy infantry, the Kiivar Anti-tank guns emerge, one to seal off the main street back through the village, the other to flank the expected push by Raesharn tanks towards the gun line. Also in anticipation of such an event, a further gun was brought across from the Kiivar right to face off the enemy tanks. 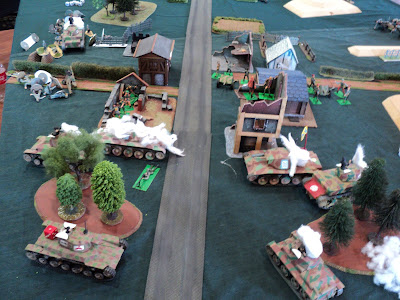 The Raesharn high water mark: emerging from behind the township, the tanks beat down the hastily deployed anti-tank gun to their front, but the lead tank (4) takes a flanking hit from the gun at the eastern edge of the village. Brewing up, it blocks further egress by Tank 1 - the sole Raesharn survivor. 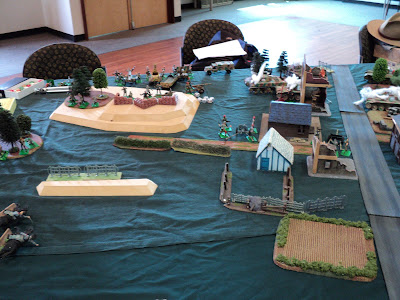 Night fell with the last Raesharn tank holed up behind the woods at the northwest corner of the village, being stalked by an anti-tank rifle team, and with no prospect of infantry breaking through to help. But the Kiivar commander also knew that for the moment his rear communications were interdicted by that same tank. Overnight he evacuated the town and withdrew a mile or so to the west.
Posted by Archduke Piccolo at 10:35 PM