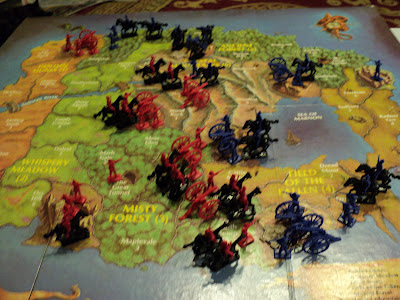 As the first week of fighting drew to a close, reinforcements came in, both sides coincidentally having 6 CU available.  Ruberia was able completely to recoup its losses, 4 new Rifle Divisions and a Cavalry being raised.  Less fortunate, Azuria raised a couple of Rifle Divisions, a Cavalry and a badly needed artillery train.
The question then arose: where ought these reinforcements be placed?  I decided they ought to go into a town, and move up to their corps.  This was not a good decision.  They should simply have been placed where wanted, but perhaps with some limitation upon how many per map space, and/or how many troops a map space could hold. 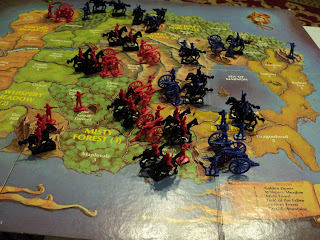 But Azuria was luckier in its roll for the initiative, though, as it happened, only two moves or attacks could be mounted.  With no sensible attacking options available, they contented themselves with moving II Corps up into Dread Moor, and pulling the remnants of III Corps back from Flintshire into Windfor, closer to the besieged town of Cinqueville.   As the turn passed to Ruberia, their anticipation of a multi-pronged attack was rudely disappointed by rolling a 1 for their move/attack allowance.  The weather must have been bad during the week, with only the one battle being fought. 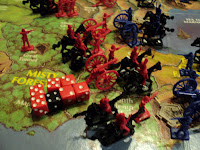 The addition of an extra artillery train in Sixbourg having made the place too strong for a single Corps to overcome, 2nd Corps was given the task once again to strike into Dread Moor.  A Rifle and Cavalry Division with artillery support and ably led (well, a leader was present) gave the Ruberian seven dice to roll ( +1 [rifle] +1 [cavalry] +2 [artillery] +3 [leader, all three arms present] = 7).  The roll was reasonable: an Azurian Rifle Division destroyed. 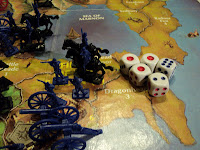 The weaker  Azurian V Corps did rather better with its 5-dice allocation.  Having just 2 rifle Divisions (+2)  plus a Cavalry (+1) with no artillery support, its commander could add just two for the two arms present (+2).  The Azurians gave their assailants a mauling, and the Ruberians remained in the forests of North Hemp, minus their artillery train.

So the second week ended with little change, Ruberia losing an artillery train, and Azuria a rifle division only.  The question of reinforcements became rather tricky, there being no spares to supply them.  A roll of 5 (on 2xd6) would have recouped all Azuria's war losses (they rolled an 8 in fact); any roll at all supplied Ruberia's wants.  For the sake of bringing the war to a speedy close, I decided to waive the reinforcement rule for the time being.  After a couple more weeks of some desultory action in the north, and rather fiercer battles in the south (including 3rd Ruberian Corps attempted storm of Cinqueville), the respective forces found themselves placed as in the following map. 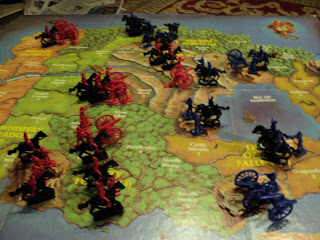 Ruberia's main offensive in the south with three Army Corps had been bloodily repulsed, and all three driven well back from the border.  First and 2nd Corps had just one rifle division between them, a sorry remnant (I think I'll enact a rule that only one leader is allowed per space, though, with a 2 space movement allowance, they can pass through a space containing a leader).  Third Corps, though in much better case, was still a mere shadow of its former strength.  But the Azurian III, IV, and V Corps had all taken heavy knocks in defence of their borderlands.  IV Corps had barely managed to remain in Cinqueville at all.

At this point both sides agreed to an armistice.  Reluctant to give up the one significant gain either side had achieved, Azuria was talked into relinquishing hold of Fourborough only by the presence of Ruberian troops occupying most of the Crystal Mountain region and handily placed to strike at Cinqueville.  Brought thus grudgingly to the negotiating table, the Azuria Governor of Marnon somewhat bad-temperedly dashed off his signature to the reversion to status quo ante bellum.

OK, then.  What to make of this?  A number of small issues cropped up:
1.  Attrition.  In commenting upon Bob Cordery's account of his own little campaign, I enquired about both sides rolling simultaneously as attacker and defender, instead of only the attacker rolling.  We agreed that the attrition rate would be much faster, and it is, but it was not such as to cause an overall depreciation of armed forces' strength given 2xD6 'points value' reinforcement at the end of each turn (week).  Mind you, as I was not using the Memoir '44 dice, there was a small difference in combat outcomes, as infantry under 'my' system were lost at just half the rate they would have been (Double-4 and double-5, 5-4s did not count for losses; c.f. two infantry symbols on each of the M44 dice).

2. Reinforcement/replacement.  Clearly 2xd6 each turn is too much.  However, I have not included any provision for the loss and/or replacement of leaders.  All sorts of ideas spring to mind here, up to and including the taking and exchange of prisoners of war.  Further, there is the question of where they may be placed, and what, if any, restrictions may be placed upon this, and upon the the number of elements per map space.

3. The Eagle Games Miniatures box came with some interesting other items that looked as though they ought to be recruited into use:
3A - Explorers and Engineers/Surveyors.  The latter I had already decided could perform a military function by assisting in the assault of fortified places (towns).  But they might well be employed in creating fortifications, or bridging otherwise impassible waterways.  On Marnon, the great River Amnon is crossable west of Haven only at the bridges.  An attack from Sheep Meade to Heatherlawn is not feasible unless an engineer(bridging) train is present.  As for the explorer figures, I haven't thought of a function for them yet.  Mineral/water/oil prospector seems to me a possibility.

3B - Naval squadrons, each of 6 pre-dreadnought warships.  I had worked out an ultra-simple set of rules for these rather similar to the land battles, in that they are decided by dice, but different in that they are - or may be - fought to a finish in one go. 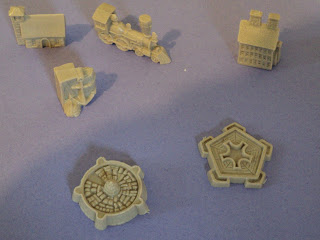 There are limited numbers of each of these, and as I don't want particularly to add to them, I'll have to think of sensible ways of employing them.  There are 6 locomotives.  If they were to represent stations or terminals then small representations of track will suffice for a rail infrastructure.  Here is another use for the surveyor/engineer figures, and maybe for the explorers as well.

Some food for thought, here!

Posted by Archduke Piccolo at 6:50 PM