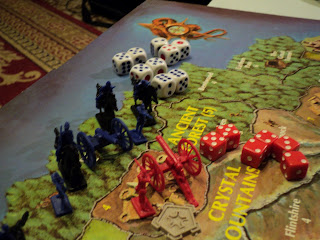 Open warfare began in the morning of 1st April, 1869, with the blue hordes of Azuria striking across the border in four places.  Of the five Army Corps, only IV Corps remained inactive, strongly garrisoning the vulnerable though heavily fortified town of Cinqueville, lying between the border and the shores of the inland Sea of Marnon.

The attack upon the desert town of Monoton by I Corps proved an abject failure, handily repulsed by the exiguous garrison (see previous posting). 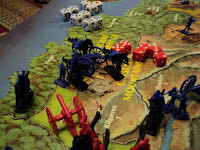 But the successful storming of Fourborough by II Corps was an early success that encouraged the Azurian forces.  Destroying the infantry division defending, the attackers forced the surviving artillery to retreat into Portston Moor, where it joined the Ruberian 5th Corps.  (Unfortunately the defenders should have got 7 dice, not 6.  I simply miscounted.  All the same, the loss inflicted upon II Corps of 1 infantry division meant the Azurian victory came at some cost.  As it transpired, this was not the last mistake I made.  However, I will continue the narrative, as we still get something of the feel for this kind of thing). 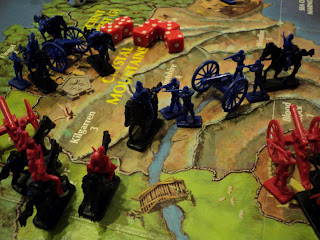 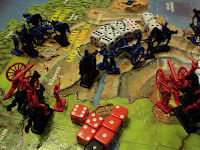 The fortuitous addition of an artillery train to its strength was a boon to 5th Corps, about to face the onslaught of the powerful III Azurian Corps surging out from  Haven.  Even so the ratio of strength was 3 to 2 (I miscounted again, thinking III Corps had 2 cavalry, so Azuria -again - got the benefit of my inability to count beyond one or two).  Having only one infantry division present, 5th Corps' losses were contained, but a cavalry unit also fell back westward into Heatherlawn.  For their part, the Azurians lost their artillery - a serious diminution of their strength.  It's invasion of Portston Moor a failure, III Corps remained in the Crystal Mountains. 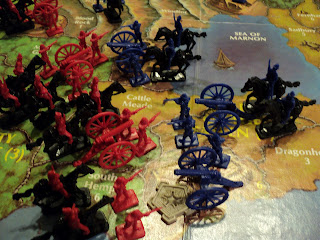 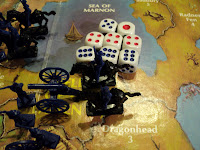 Azuria mounted just one attack in the south, where three Ruberian Corps were concentrated.  This was intended as a spoiling attack, in the hope of taking the pressure off the fortified town of Sixbourg. 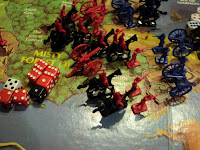 The V Corps attack was spectacularly successful in that the opposing 2nd Corps was forced - minus one of its infantry divisions destroyed in the battle - to retreat into Marls Gate, deep in the Misty Forest.  But the Ruberian defenders had fought stoutly enough to cause V Corps in turn to come pouring back out of the North Hemp, across Dread Moor and into Dragon Head.  Despite this ignominious retreat, Azuria could count the North Hemp battle as a strategic victory: one half of the Ruberian pincers aimed at Sixbourg had been thrown back. 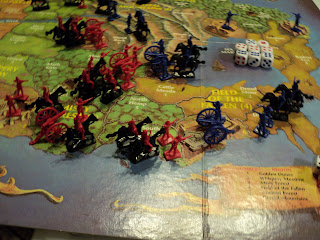 The initiative now passed to the Ruberians (Side B), who, like the Azurians at the beginning of this turn, rolled a 4 for allowed moves and attacks. 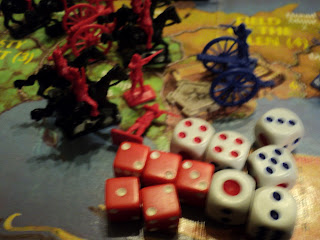 First off, 2nd Corps reoccupied North Hemp, from which they had recently been evicted.  Meanwhile, 1st Corps launched its lone assault upon the Sixbourg.  That the place was fortified put the odds somewhat in the defenders' favour, yet there remained a reasonable chance that even unaided the Ruberian attackers could take the place (e.g. a triple 6, or any combination of double-1, double-4, double-5 and double-6 would have taken the garrison out of the place.  Mind you, with just the 5 dice available, that's a tall order.).  Unfortunately, for the cost of one of its infantry divisions, the attack failed miserably. 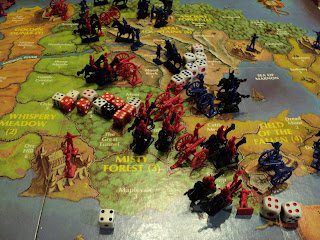 This was not a good augury for the rest of Ruberia's campaign.  Deciding for the moment that Cinqueville was too strongly held, 3rd Corps marched over the passes into the upper Haven valley, an attack intended to coordinate with a 5th Corps attack into Haven from the lower end.  Thus caught in a pincers, III Corps put up a tremendous resistance, the battle proving the bloodiest and most decisive of the campaign.  The attack by 3rd Corps inflicted losses amounting to 3 infantry and 1 cavalry division, and forced its survivors into a retreat across the mountain range into Flintshire.  But III Corps mauled their opponents badly before giving way: 3rd Corps admitting the loss of an infantry and a cavalry division, and a third - rifle - division falling back into Marls' Gate.  (The sapient reader will have observed that I had forgotten my about cavalry not being counted in fights in mountains, except insofar as they count as an extra arm if a leader is present.  So the Ruberian 3rd Corps should have got 9 dice only; the Azurian III Corps 6 dice.  Never mind.  I may rescind this rule - already provisional anyway.  But a question does arise with one-two attacks like this.  Should all forces roll at once, or should each be resolved separately, the defenders getting to roll against the second attack with the survivors from the first?  For this action I had intended the latter option) 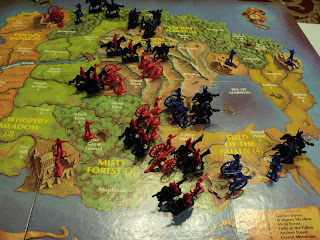 The hasty retreat by III Corps meant that the 5th Corps' blow fell upon empty air.  Nevertheless, they poured into the Haven, whilst 3rd Corps remained in Pembroke, menacing Cinqueville.   There was precious little left of the once powerful III Corps - a single infantry division with its leader. 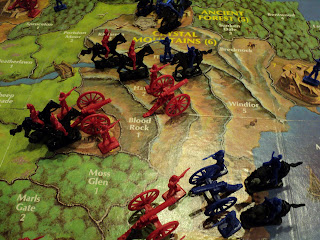 As the first week of hostilities drew to a close, both sides could count the gains and the costs.  Azuria had scored an undoubted success in taking Fourborough.  There seemed little prospect of the town being retaken any time soon.  For the rest, the only really decisive action had been the Ruberian victory in Haven, that had decimated III Corps. 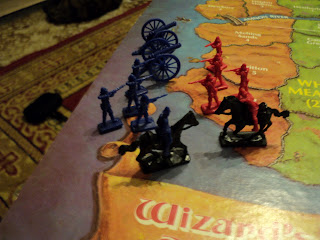 The losses in Horse (1 Division) and Foot (4 Divisions) had been equal, but Azuria had also lost two artillery trains.  When it was learned what reinforcements they could expect, Ruberia was pleased to discover it could recover all its losses (rolling 4+2=6); but Azuria (rolling 5+1=6 also) was much less delighted.  A net loss of 4 CU was not to be sneezed at.

I am a bit uneasy about the reinforcement rule, for reasons that emerged later in the war.  But we'll visit this issue next time.
To be continued: The First Marnon War, Week (Turn) 2.
Posted by Archduke Piccolo at 8:19 PM