Naval subjects have been the topic of recent postings on several blogspots I follow.  Having mentioned my 'Mighty Armada' collection in a comment on 'Pauly-Wauly's' Other Blog,  it occurred to me (because he suggested it) that it would make a fine topic for a posting on this one.  I think when they turned up (this was the late '70s or early '80s) at a then well-known Wellington bookshop, I bought the entire stock, though I never did form any clear plan on how I was going to use them.


I have recently considered using them for Jono's World, but much longer ago had another possibility in mind.  It seemed likely that my mid-20th Century Imagi-Nation, Gran Bolivaria, would have acquired some sort of blue water navy, perhaps surplus ships of the greater powers as World War Two was drawing to a close.

Of course, it was too much to expect that a small, none too wealthy, Latin American country could get hold of large battleships (which were at the bottom of the sea anyway), but suppose these were cruisers?  The Yamato class might be thought of as heavy cruisers, the others as light.  As it happened, I also had a model of Prinz Eugen, which was of a size with these vessels.  Cruisers, then, they were.  Orotina purchased the Prinz Eugen for a song (that it participated in the Bikini Atoll nuclear trials is a myth...).  So Orotina has a navy in being to ensure that Gran Bolivaria does not rule the seas in their part of the world.

These aircraft carriers are, therefore (in my 'Latin Wars' terms), quite small ones - escort carriers, withal, each with a complement of, say 20-25 aircraft.  In Jono's World, however, they would be (are) fairly large, and carry perhaps three times the number of aircraft.

But it was what follows that drew me to the whole collection: the merchant marine, and  the sea port.  These gave a whole new dimension: the possibilities of commerce raiding, attacks upon escorted convoys, raids upon the docking facilities, 'Pearl Harbour' type operations. 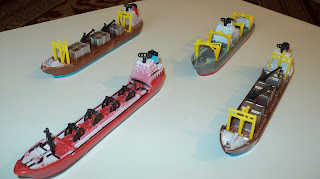 The size of these merchant vessels also tend to indicate we aren't dealing with large warships, here.
Altogether, the whole collection seemed to me replete with the promise of hours of endless fun.   Pity I never really got round to doing more with them...

Posted by Archduke Piccolo at 5:27 PM