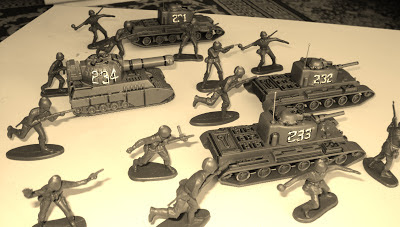 Readers who have been following this blogspot for any length of time might well be wondering whatever happened to the 'Jono's World' project.  It's still going, in fact, but unfortunately without its creator, Jono.  Several months ago I got a call in which he felt that the wargaming aspect didn't interest him so much as did the creation of the worlds and the filling in the geography and history. 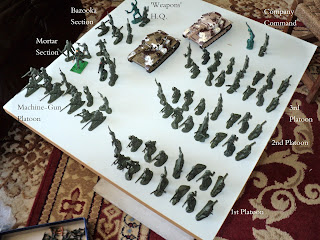 I might have guessed.  He had for some weeks been talking up an imaginary world very similar to our own, but with New Zealand increased in size to a pair of continents.  Nice idea, but, having spent considerable time on it, I wanted to develop the Sideon IV concept.  Persuading Jono to keep his armies took considerable effort (rightly or wrongly), and I hope he does find enjoyment out of them - they don't have to be Sideon IV.  But I respect his decision.  I don't think it came easy. 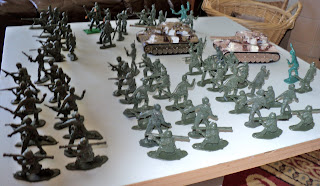 Meanwhile, continuing the project for myself, I've begun collecting various army men type figures and am on the hunt for suitable vehicles and ordnance to go with them.  The above two pictures show an infantry - possibly armoured infantry - company comprising 3 rifle platoons (each of 2 sections/squads of 7 men apiece), a medium machine-gun platoon with 4 MMGs, a mortar section (sans mortars - more of this anon), and a section of Bazooka men.  This latter section (squad) is to be transferred to another infantry company. 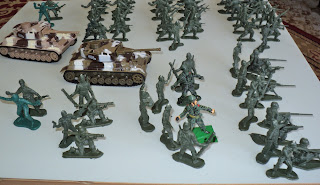 By way of comparison of scale, my two recently acquired  PzIVs are included in the picture.  The lower angle in the next picture gives possibly a clearer idea.  Under-scale; yes.  Acceptably so: yes again.  They will count as probably the top notch AFV in Jono's World: Heavy (or maybe medium) Tank with a heavy anti-tank gun.

Below is a selection of figures of a different manufacture that I bought at a supermarket of all places.  It seems to have been some promotion or other.  At any rate, the tanks were quite underscale compared with the figures.  Yet they seemed to me usable (the jeeps, on the other hand are HUGE - they might end up as light trucks or artillery tractors).  I've halved the length of the gun barrel and call them light tanks, with a light anti-tank gun (a 20mm cannon, say).  The olive green vehicle in the background, an item that has been in this household for well over a decade, has become a light infantry support tank armed with a heavy infantry gun (a short 150mm fellow).   These four form a light tank company. 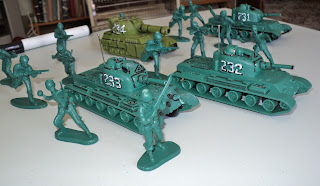 Below are the figures.  Now I like these guys, for several reasons.  All the poses are reasonable, barring more grenade guys than I would really like.  And each pack was identical, unlike the random assortments one often finds: 3 packs gave 2 each of 10 different guys.  The only problem is that you don't get any support weapons.  These had to come from the other army men toys.  Each squad has 9 men, each platoon 20, with a Bazooka man attached to the Platoon HQ.  The earlier mentioned Bazooka Squad will become attached to the 'Weapons' Platoon of this Company. 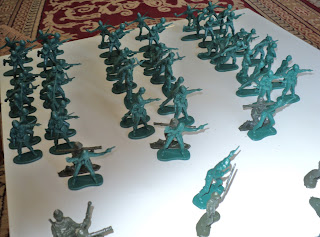 So this MG Platoon is part of this infantry company. The two companies, by the way, are not intended to be part of the same battalion or regiment, but will represent separate units, one being a footslogger outfit, the other motorised or armoured infantry. 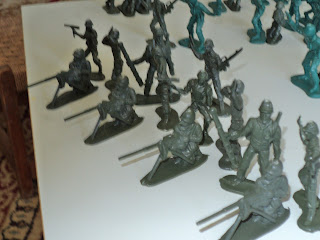 Here the organisation of the rifle units is clearer.  Of course, these are scaled down companies, 60 or 70 figures apiece (real companies being double or treble the number).  At that, it is likely in certain circumstances that each will stand in for and be referred to as their parent battalions - a secondary form of scaling. 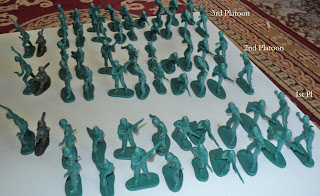 Light tanks on the move past a hibernating - and none too fragrant - ancient hairy creature that used to be a mongrel but is now a designer breed, apparently: a Taco Terrier (chihuahua/fox terrier cross - this specimen at least came out looking like a dog).  The severed pieces of gun barrel on the tanks will not go to waste, becoming shortly the tubes of the mortar sections integral to the infantry companies. 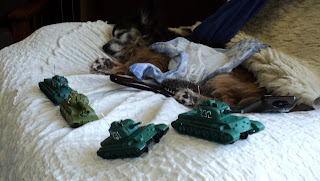 Finally, a pic of a light tank compared with the foot figures.  The right hand group are slightly taller, and vary in height as well (some big guys in there!), but I don't think the tank - as tankette - looks too out of place.

These are all from the army of Kiivar, except for the PzIVs.  They are destined to join the invading Army of Raesharn... Some more soldiery (tan) called for...

Posted by Archduke Piccolo at 6:48 PM