Labour weekend being the time that the Cavalier Club stages its 'Conquest' wargames convention left not much activity happening at the Woolston Club (which I think is still the best wargames venue in Christchurch. 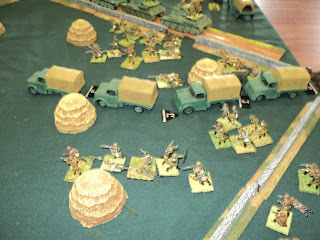 So the pick-up Panzer Marsch game between myself and Tony Ormandy was played in splendid isolation on an 8'x6' table in the middle of an empty floor.  A couple of other guys (Kevin and Jonathan) turned up to kibitz and chew the fat, and a pleasant laid-back sort of day was the outcome.

Colonel I.A. Dowmanovitchsky received the order on May 9th to make a push towards the important rural town of Chilyabunnsk, to destroy all Hitlerite troops therein, and occupy and fortify the place for defence.  It so happened that the town had lain pretty much unscathed in no man's land through the terrible winter just past, and the local German commander detailed Oberstleutnant Antonio von Ormandy with a kampfgruppe of all arms to take, carry or seize the town and the ridges beyond, and if possible to exploit on towards the north.   So it was that the early morning of May 9th 1942 found the two battlegroups racing to meet each other.  The Germans achieved their first objective, the town, without opposition, but it soon became apparent that the day was not going to continue peacefully for much longer...


The first pictures are of a general Russian advance: Nr3 Rifle platoon, the MMG Platoon, and a platoon of 45mm Anti-tank guns entering a large field; whilst a weak tank company, carrying  Nr2 Rifle platoon, moves rapidly up the road. 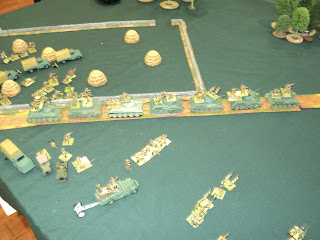 The above picture shows the Russian tank column carrying Nr2 Platoon up the road...

...and this shows Nr1 Platoon to their immediate right advancing on foot.  Most of these are ESCI figures, but the SMG guy in the fur hat is the figure that came with the Matchbox T34 kit, and the rest are Airfix or Hong knockoffs of some outfit I've never been able to identify. 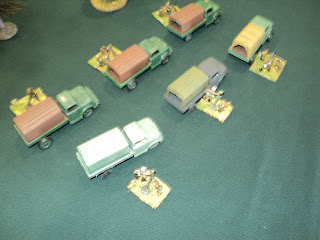 Trucks of the Mortar company advance up the right flank...


I never did get a very clear picture of the German OOB, but broadly speaking the Battlegoup comprised:
* Battlegroup HQ
* A weak Composite Panzer Company with a PzIIF, Several PzIII tanks armed severally with 37mm (PzIIIF), short 50mm (PzIIIH) and long 50mm (Panzer IIIJ); and PzIVF1s and a PzIVF2 - a total of 9 Panzers.

* Antitank Gun Platoon with 2 x 50mm PaK38s, and a 37mm PaK35/36
* A weak Panzerjager platoon with 2 Marders armed with 75L43 guns.
* An infantry company - a platoon and Coy HQ of which ensconced itself in the town.
* Two StuGIII platoons attached to the composite Panzer Coy.  Each comprised 3 StuGs.  The lead (Nr! Platoon comprised 1 long and 2 short gunned AFVs and the 2nd, 2 long and 1 short.

Below is the general view of the table from the German point of view.  The Panzers advance up the left flank, heading through the open woods thence onto the ridge beyond.  The StuG platoons push up on the right, Nr1 platoon sweeping around to the right of the wooded areas in an attempt to flank the Soviet positions; Nr2 Platoon was to push between the small tracts of dense wood close by the town (Chilyabunnsk) and surrounding the source of the small stream.
The centre was covered by the infantry platoon in Chilyabunnsk; the Antitank Gun Platoon dropped into battery position along the north face of the orchard;  Nr 2 Platoon raced forward in its motor vehicles and disembarked in the lee of the central hill (We'll call it point 101); and Nr3 Platoon accompanied the Panzers.
Here's the situation from the Soviet perspective.  The tanks, together with Nr2 Rifle Platoon race up the road, but not so fast they were unable to time their halt to unload.  Nr1 Platoon had perforce to advance on foot, which meant they fetched up behind Nr2 Platoon.  Upon the right flank, the Mortar company also advanced.  I did hope I could occupy the ridge and Point 101 betimes, but things didn't work out that way. 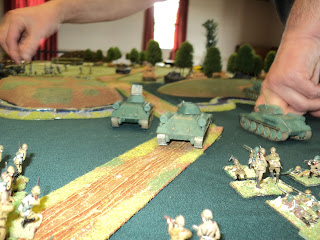 Meanwhile, Nr3 Platoon, together with the anti-tank guns and MMG Platoon were to set up a defensive position in the large field.  The LMG moved up on its left heading for the woods in front of the field (and with luck the woods beyond), and it was hoped a section from the Rifle Platoon could occupy the wood also.

Both sides surprised the other with its selection of AFVs Tony expected me to front with 10 T34s at least (we were looking at early 1942 as the limit of our allowed technology); and I had to admit that the 17 tanks and assault guns the Germans turned up came as something of a shock.  We'll see what happened next time...
Posted by Archduke Piccolo at 6:01 PM