Many years ago, about the turn of the century, I acquired a small British Napoleonic Army.  A wargaming buddy had for years been trying to flog it off, dragging it along to swap meets of a Saturday morning, and dragging it back home again of the Sunday evening.  I always did wonder why no business resulted, but it may have been that my pal was a bit too uncompromising on price, and upon an all-or-nothing sale.   It seems that there might have been a certain dissonance between what he wanted for the figures, what refurbishments he was willing to make to tidy up the army, and what potential buyers were prepared to buy and at what price.
Water under the bridge now, of course.  I didn't have the money to buy the army - not that I particularly wanted Brits anyway - but finally we did a deal.  I would organize and paint up a plastic army for his daughter (which features in a post early 2010: here), and he could have my 6mm SYW Austrians (after 10 years and more, I knew I was never going to do anything with it). 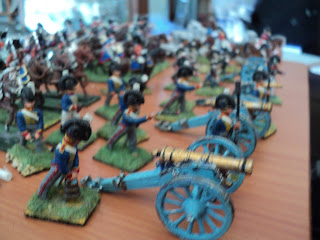 Well, in time I've had this army, it has seen no action - not since my French defeated it a year or so previous to our deal.  Every now and then I've hoiked it out and poked about with it.  One discovery was the shortage of artillerymen for the cannon (2x9pr, 2x6pr and a howitzer).  Fortunately I had some earlier generation Minifig gunners with brown jackets, painted up for service with the Archduchies of Trockenbeeren und Auslese.  All the gunners are Royal Horse Artillery figures, but only the 6pr guns will be so defined.
We also found there were no horses for the Heavy Dragoons (the Light Dragoons were fine).  Eventually I obtained some extra dragoons and additional horses to for two regiments of heavy dragoons, each with just 2 squadrons, as frequently found in the Peninsula.  I also nicked some from General Whitbread's (Wellington's) staffs...
Although this army is emphatically a Peninsular War one, there are a number of ways I have played fast and loose with history.  For one thing, my cavalry units will be provided with flags and/or guidons.  For another, the units I name will be recognised as coming from Brigades that served at Waterloo.  The reason?  Flags.  The best and easiest source of flags has only the Waterloo ones.   Not a difficult decision to make...

Most of the figures are Minifigs, like these Fusiliers.  Although its flag and that of the Buffs (3rd Foot) were well painted in metal, I bit the bullet and replaced them with paper flags.

This was for the sake of consistency.  As none of the other units had such flags, I would have to supply them with paper flags - no hardship: I prefer paper flags anyway.  All the same, destroying the original flags was a bit of a wrench.

You will notice, perhaps, a few toothpick bayonets.  There had already been quite a few breakages, and the earthquakes of recent times added to this.  My repairs are simply to carve out the bayonets, and/or the missing section of musket (if they are missing) and glue them back, and hope for the best.

The unit below was not part of the original acquisition - or at least, most of it wasn't.  At a swap meet some years later I found twenty advancing musketeers, going for a reasonable price, that would be reasonably compatible with the Minifigs.  Except for the command element (Officer, drummer and two flag-bearers - all Minifig) these were slightly larger than the Minifig guys. I think they might have been Essex figures, but I don't know for sure.  At any rate, they became 3/14th Buckinghamshire Regiment of Foot. 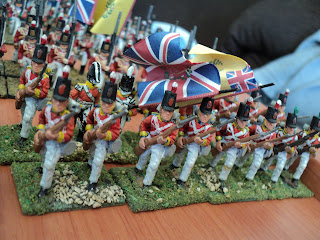 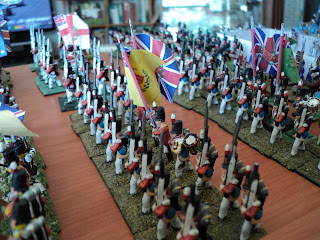 A close view of 2/30th Cambridgeshire Infantry. Originally, it had been painted up as 'The Buffs' - and a very nicely presented unit it was, and all.  But it just didn't 'fit' with my plans.  Superman is not merely faster than a speeding bullet; he catches them in his teeth and  chews them.


To its  right, the 33rd Foot (1st West Riding), and followed by 2/69th South Lincoln Infantry.  All the 'march attack' figures have been brigaded together, but as the fourth unit had the later 'Belgic' Shako, I decided to make that into a Portuguese unit (a picture appears later).  However, this Brigade is still wanting the 73rd Perthshire Regiment.  This had been originally a Highland regiment, but owing to recruitment difficulties, its 'Highland' status was stripped from it (in 1809 I believe), nor was it permitted to wear the regalia of a highland regiment.   Too bad: I want a highland regiment, so eventually the 73rd Perthshire Highlanders will augment this Brigade to 4 battalions. 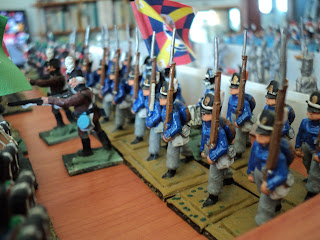 Five, if you add in this Portuguese battalion.  The paint job here is only half-finished.  In addition to the line battalion, the brown-clad Hinchliffe figures form a 2-figure company of tiradores - the only two such figures in this Army.


Even less finished is this, the 33rd Foot.  This is a fresh paint job (I received this unit unpainted), but I have been very slack about finishing these guys. 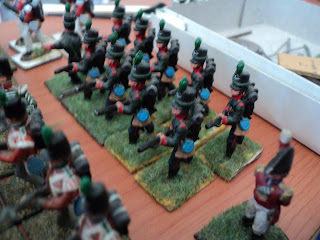 Here's my half-battalion of riflemen: the 5/60th Rifles.  The full battalion seemed to me over-representative, so I gave half to a friend who was short of riflemen of any description.  I thought the 5 companies represented here a goodish number for the forces represented. 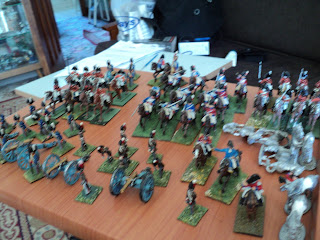 There you have it.  A small, self contained wargames army, pretty much all there, except for some work needed to round it off and finish it:  150 foot (eventually 170 including the Highlanders - each battalion comprises 20 figures), 28 horse (7 squadrons at 4 figures each), 5 guns - a little over 200 figures in all.  Overall a bit over-gunned, but it is likely my Brunswicker Black Corps will get the howitzer.  The shortage of cavalry is deliberate: a problem that Wellington always had to deal with.  This army has received from me rather less than the TLC it really deserved.  Perhaps over the next few weeks we can mend that.

Posted by Archduke Piccolo at 7:41 PM