A few weeks ago I posted some pics of Revolutionary/Napoleonic Wars Russians, and a rather historic licensed Highland battalion.  Since then they have progressed.  Almost finished, withal, and some other figures almost begun... 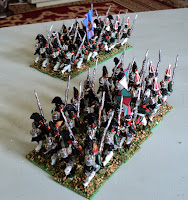 I don't know what manufacture of soldiery these are - 28mm, fairly roughly sculpted but plenty of character to the figures.  The many advancing poses, and several cheloveki without hats leads to quite an animated unit - rather different from my usual Napoleonic battalions. 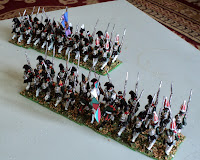 I believe these are more in the way of Revolutionary Wars Russians, still with bicorne hats for the musketeers and mitre caps for the grenadiers. At that, I have taken some liberties with history by placing a 4-figure grenadier company in each of the battalions.  History be damned: the units together make a fine Brigade (or Division with an Army level rule set I have in mind).
The 73rd (Perthshire) 'Highland' Infantry are very nearly complete, but for clox on sox and chequers on the bonnets. 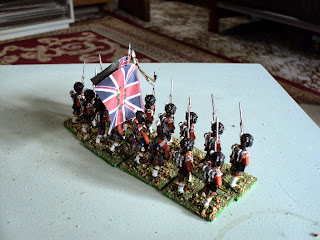 I have mentioned before my method of skewing downloaded paper flags (using the Microsoft 'Paint' software), from a oblong to a more lozenge shape - a parallelogram - in order to improve the way they 'drape' from their poles.  This does have the effect, I suspect, of making the end result a little darker than it might be.  There are a number of ways one might tackle this, but one method might be to 'stretch' the flag in the fly - make it a little longer horizontally - before skewing.  10% seems about right.
Looking at these pictures show that some touching up is indicated along the edges of the flags.  Look how dark the regimental flag is! 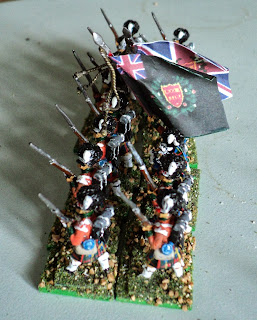 These two confrontational pictures show clearly, I think, my method of rendering the tartan.  Rather than try to paint the whole thing, I took what I considered to be a 'representative' section as the basis for the whole. Instead of two (or more?) rows of blue squares, there is just one. On the whole I was quite pleased at how the thing turned out. 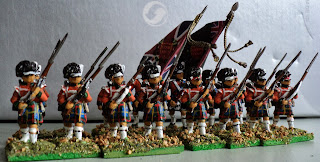 Meanwhile, back in the USSR I mean Russia the remains of the Corps is still to do.  To begin with, a rather understrength unit of Jager, from the Minifigs 25mm range.  The green of their uniforms is rather darker than it ought to be, perhaps. 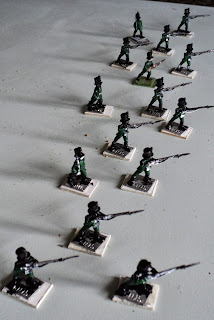 Below I have begun by undercoating the two Grenadier (St Petersburg and Brest-Litovsk) battalions.  I include these to show my recently adopted method.  Previously I preferred to undercoat in white and then outline in black before beginning painting.  This method took a little time but there were two upsides to this. First was, that once this was done, the figures would be already looking interesting, and it kindled enthusiasm for continuing painting.  The second was that accurate painting was a lot easier. 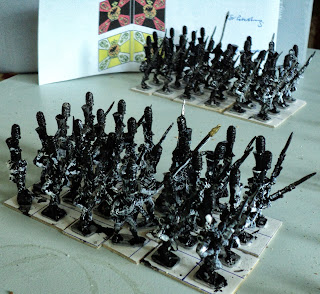 Unfortunately my eyesight rules that method out - you need good binocular vision, I find.  So now I black undercoat, and then by whisking - almost dry brushing - over with white, I can pick out the details.  This means I can actually see them, but also means that the applied colours won't be dulled - except where required - by the underlying dark undercoat. 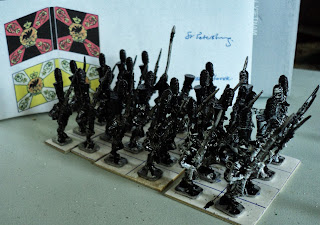 Only two ranks of the above column have been so treated so far.  In the background, the flags the battalions will receive (nicely contrasting, methinks).  They have been downloaded from Napflags and the obverse and reverse skewed as you see here.  The centre - pole - section has been moved up.  This has left those white vertical lines you see, but they can be blacked out, or left as is, as I decide.
Posted by Archduke Piccolo at 9:37 PM