Jono's World project
Along with the inventory of shiny things for the Harad affair, Brian brought around a bunch of things that were over-scale for his projects.  However, they seemed to be adaptable for the 'Jono's World' project in some way. 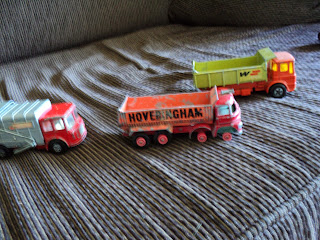 Two dump trucks and a garbage collection vehicle.  Great for infantry transports or maybe road construction.  The GCV could have part of its rear removed leaving the rest as a tilt.  I'll have to investigate that. 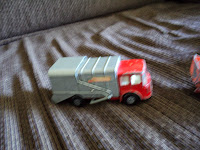 This trio is interesting.  I did have vague notions of constructing a 'cartooned' airfield, with airstrip, control tower, and dispersal bays.  The addition of a fire service vehicle and a couple of aircraft transporters seems just the deal. 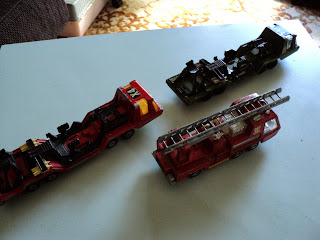 The Raesharn aircraft sit quite well on the carrier vehicles.  Observe the bomb stowage  above the rear wheel mudguards. 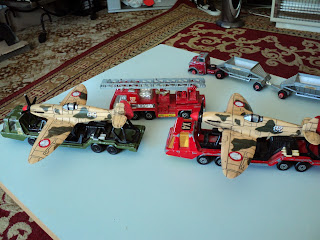 In addition to the 'airfield' vehicles, the one in the background seems destined for the Corps of Engineers. 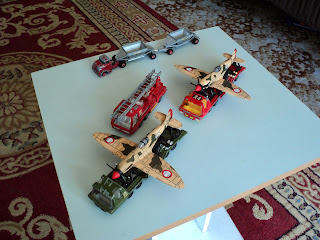 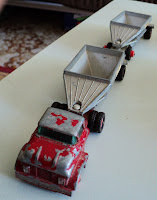 The two hoppers can be emptied by opening up their floors.  Looks a whole lot like road construction to me.  At any rate, this chappy will be the beginning of the Engineers' train.

The Fort Knox truck will become a battalion or battle group HQ vehicle, with aerials added. 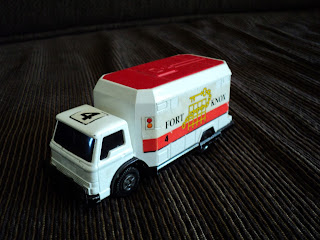 An amusing feature of this vehicle is the combination locked rear door. As there are only 9 possible combinations (111 to 333) it didn't take long to open the thing (empty - just like the real Fort Knox).  I don't think I'll remove that feature, somehow... 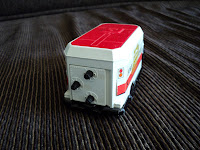 And now for something completely ... different.  Here are three Air defence... 'pods' with quadruple AA cannon.  Obviously intended to be towed, they will require some kind of motive force - probably light trucks will do.  They can be scratchbuilt. 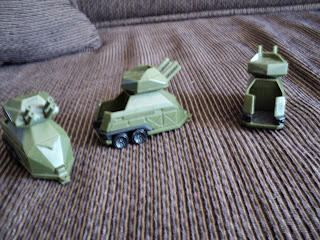 Harad project
Yesterday, Brian and his buddy, Kyle, turned up with some more shiny things for the Army of Tchagai.   Not this heavy truck, though.  That came from a toy sale at a well known toy store about a year ago. 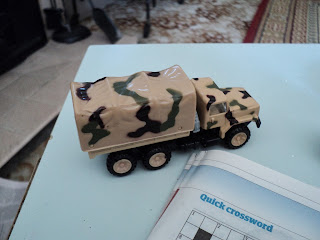 A bit of a surprise was this rather nice tank - a ROCO Chieftain.  As ROCO is quite a small 00 scale (1:87), it didn't 'fit' with Brian's inventory, and doesn't look that much like a Chieftain MBT anyhow.  We thought that we might make a persuasive case of its being an example of a private commercial venture Vickers MBT.  Now, these AFVs were a kind of 'junior Chieftain', if you like - about 90% the dimensions and 80% the weight of the Chieftain itself.  So I call it the Vickers MBT Mark 5 'Victor' tank (I'll look up the Urdu for 'Victor' to give its Tchagai cognomen).  So far as I can make out, there never was a 'real life' Mark 5 'Victor' in the Vickers tank production history. 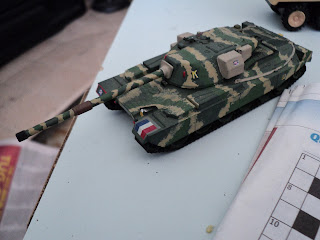 The pick were these nice looking APCs.  Brian thought the roof top MGs on the 4-vehicle row were considerably over-scale, and suggested they be replaced.  Although I agree on the over-scale thing, I don't think I'll have the heart to remove them.  They'll still count as a VMG.  On the 4-wheeled green number, it appears that the gun-thing was really part of a fire-fighting water or foam projection unit.  They'll stay a VMGs as well (I may remove the ends, which look like muzzle brakes.  On the other hand I may keep them as 'flash suppressors').  The rocket launcher chappy is a welcome air-defence (?) vehicle.  The 1st Rapid Response regiment is starting to look the real deal!  The attached MBT platoon will give it that extra little bit of 'heft' ... 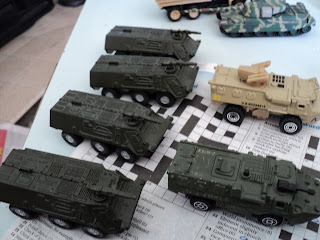 My notion of having 3 figures per stand having met with stern disapproval from Brian and Kyle, it looks as though the Tchagai battalions will comprise 4 rifle companies (instead of my projected 3) plus a HQ company, like the British model.  Something like this;
Infantry battalion:
HQ Company with: Command stand, Signals radio stand (or vehicle), Anti-tank gun stand (?), 2 ATGM stands (splittable into 4 'patrol-sized' ATGM team stands), 1 AARL stand,  2 MMG stands, 1 recon infantry stand (splittable into 2 'patrol' stands.
A,B,C,D Rifle coys, each with:
1 command stand, 3 infantry stands.
All infantry stands have integral RPG-7 ATRL.

Perhaps that will be a topic for the near future...

Posted by Archduke Piccolo at 5:47 PM