The other day, I received a shed load of toys that were surplus to the requirements of a fellow wargamer and blogger.  Thanks, Brian!  Not overfond of resisting temptation, I accepted quite a lot of them, and now find myself somehow involved in Brian's Empire of Harad project.  Among other things.  A lot of what came my way was over-scale for his purposes but looked as though it would 'fit' quite well with my 'Jono's World' project.

But let's see what came my way.  First, for this posting, an overview of the toys that will become part of the Army of Tchagai. 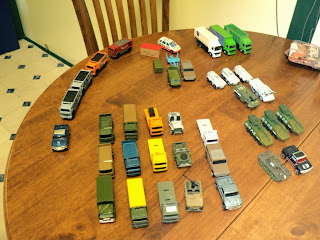 At first the trucks were going to be all 'lights' but I noticed a number of 6x4 or 6x6 vehicles in there.  As they were also a whisker bigger than the others, it seemed not unreasonable to make them mediums carrying 2 infantry stands.
Next is the 'Rapid Response Reconnaissance Battalion'.  I see this unit as a 'seek and develop' force, there to uncover the enemy but also to force him to develop some of his strength.  At present it comprises:
HQ: 1 command stand, 1 command utility vehicle, 1 recon AReconV (This is a locally designed and built 'Bagheera' light tracked AFV, bearing an astonishing resemblance to a miniaturized Panther tank).
Recon Company: 3x Saracen APC, 1 command weapons stand, 2 recon infantry stands (both of which may be split into patrol stands).
Assault Company: 2x APC, 1 command weapons stand, 1 infantry stand.
'Stryker' Support Company:  Not until 21st century I discover to my horror.  There will have to be something else in the 'big gun' armoured car line for earlier.
The third item is an Artillery Regiment comprising 4 batteries each with 1 stand, and 1 prime mover.
HQ: 1 command utility vehicle.  I'll need to form at least one Forward observer team as well.
What to use as artillery? British 25pr gun/howitzers were mentioned.  I am very tempted to form a composite formation comprising 2 field batteries, 1 medium battery and a medium (120mm) mortar battery.  That might mean a lot of observer teams, though...
These 3 heavy trucks I'm not sure about.  They could carry 3 infantry stands apiece, and therefore the best part of a battalion all together.  But I may just leave them as is, to be commandeered when a second battalion is needed at the front.
Finally there remained this little collection (see infra).  The paramedic vehicle will I think be retained in its humanitarian role, probably with a Red Crescent symbol within a white roundel on the roof.  The 6-wheeled truck will become a staff radio vehicle perhaps, though I'm also thinking of the container as a truck-carried temporary HQ for that purpose.  The tilt also requires a truck underneath it, but it doesn't fit the one available.  The boat trailer is also unclear as to future.  One assault boat doesn't seem especially useful (I could be wrong), but local air defence might be an option.  At any rate, what we are looking at here is the 1st 'Mechanized' Brigade HQ...
Finally, not included in the pile, were these specimens that have been sitting in my 'man drawer' for the last yonk or two.  I think they were meant to be Walker Bulldog tanks.  Could they be resurrected as tracked recon vehicles?  Seems doubtful, I have to admit.

Of course, what is really wanting is armour - main battle tanks.  I was thinking something a bit different: French AMX30s.  But given the variegated collection obtained so far, this seems to me to take eclecticism just a bit too far.  I'm now thinking in terms of Soviet T-55 tanks.  I was a bit reluctant at first to accept this suggestion of Brian's, but research indicated quite a few countries have these still in first line service.  As most of Brian's project is set in the early 1980s, then it would be more than appropriate.  (I have sat in a T55, and I'm here to tell you they ain't what you'd call 'roomy'!)

It was while sorting through this stuff that Brian and I discussed what the map of 'Greater' Harad and its environs would look like.  Here is a tidied up sketch of the 'Middle East' as we envisaged: 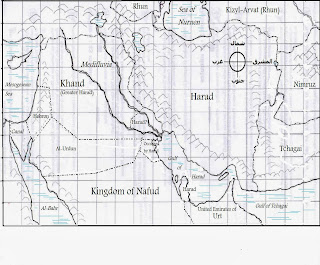 I was thinking of reorienting the map with the west end at the top, the Arabic directions being exactly the same as on the map - with 'north' (شمال) pointing to the right. But the thing seemed simpler to leave as is.

Among all the toys were seemingly hordes of WW2 Russians. In each of the nine containers pictured are 31 figures - 1 battalion, less 'weapons', assuming I can place 3, instead of the standard 2, figures on a base.  Of the rest, there must be at least 2 more such battalions, and plenty left over (especially the 'miscastings') for gun and mortar crews and the like. 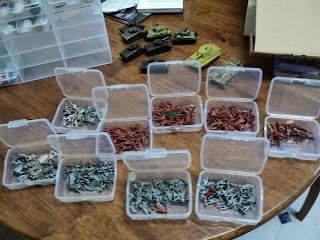 Omitted from the above pictures were these two rather cute die-cast metal Shermans.  I had some thought to adding them to the 5 ROCO M4A4 Shermans that currently serve as a Medium Tank Battalion in my Soviet Army.

These plastic Shermans are very nearly as big as the Airfix M4, and were certainly almost of a size with these Chinese metal numbers.  But it seems to me we might also be able to accommodate these guys in the Nabob's army as kind of second line armoured forces.  Whence comes to that, I have several T34/85s that (with post-WW2 upgrading) might form another armoured battalion.  So the elite 1st Mech Bde I'm thinking will get a 5-tank battalion of T55s (1st Armoured Battalion), and be supported by the 2nd Arm'd Bn (Shermans - dating from a time when relations between Tchagai and the Union of American States were more cordial than later they were to become), and the 3rd and 4th Arm'd Bns (both T34/85). 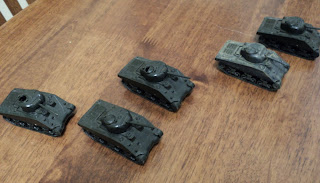 While I think of it, some time ago, Brian flicked my way a metal King Tiger, pictured below.  The running gear is kinda wrong, and the scale seems a rather small 1:76 (more like a 1:80, I suspect), but it will be a useful addition to my German army at any rate.  The tank commander we called Roland, as he resembled the headless Thompson gunner of the same name.  Roland Mittoutkopf I called him.  A Matchbox grenade guy gave his life to provide Roland with the necessary extra features once more to face the enemy... 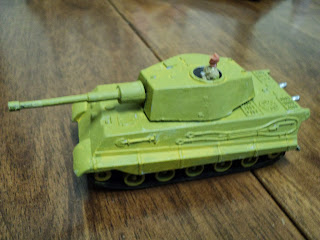 Slightly underscale as I suspect this AFV to be, he still has a certain presence in the face of herds of Sherman tanks!  Roland's head transplant was secured by drilling holes in the trunk of the original, and up the neck of the replacement head, and inserting and gluing a short length of modelling wire.  It looks a bit rough, still, but a paint job should sort that. 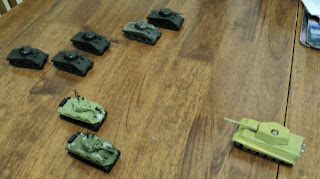 I will probably replace the gun - or modify it at least.  Just to confirm my impressions, I compare the 8.8.cm L/71 with one of my Matchbox Jagdpanthers. 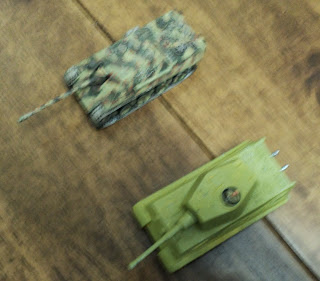 The final two photos I think confirm it beyond doubt.  The gun needs to be lengthened somehow. 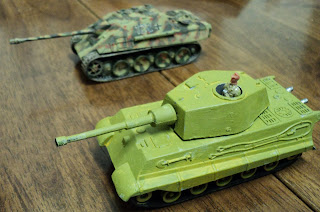 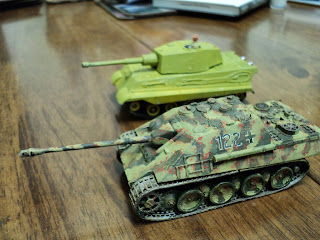 My thanks to Brian (A fist full of plastic) for this vast increase in my inventory.  And a new project to think about.  The 'Jono's World' stuff I will show in another posting.

Acknowledgements:  My thanks and welcome to the 94th (James Fisher, FINS) and 95th (Son of York) followers of this blog.
Posted by Archduke Piccolo at 10:05 PM