This posting is something of a an intermezzo between my previous and my intended next posting.  Looking at Bob Cordery's Itchy and Scratchy rules concept, and the armies he pictured in his (at this date) last posting, it seemed to me a good idea look again at my Ruberia-Azuria War.  Here's where the project is at so far...

Above, rather a bad photo of the Ruberian Army as presently constituted.  It is wanting its Gatling guns, still. I suspect that the Itchy and Scratchy concept would tend rather to subsume Gatlings and mitrailleuses, but I can think of ways around that.  One is to re-scale my armies - double the number of elements, say, per Division.  Actually, my original project had 3 stands per Ruberian Infantry Division. 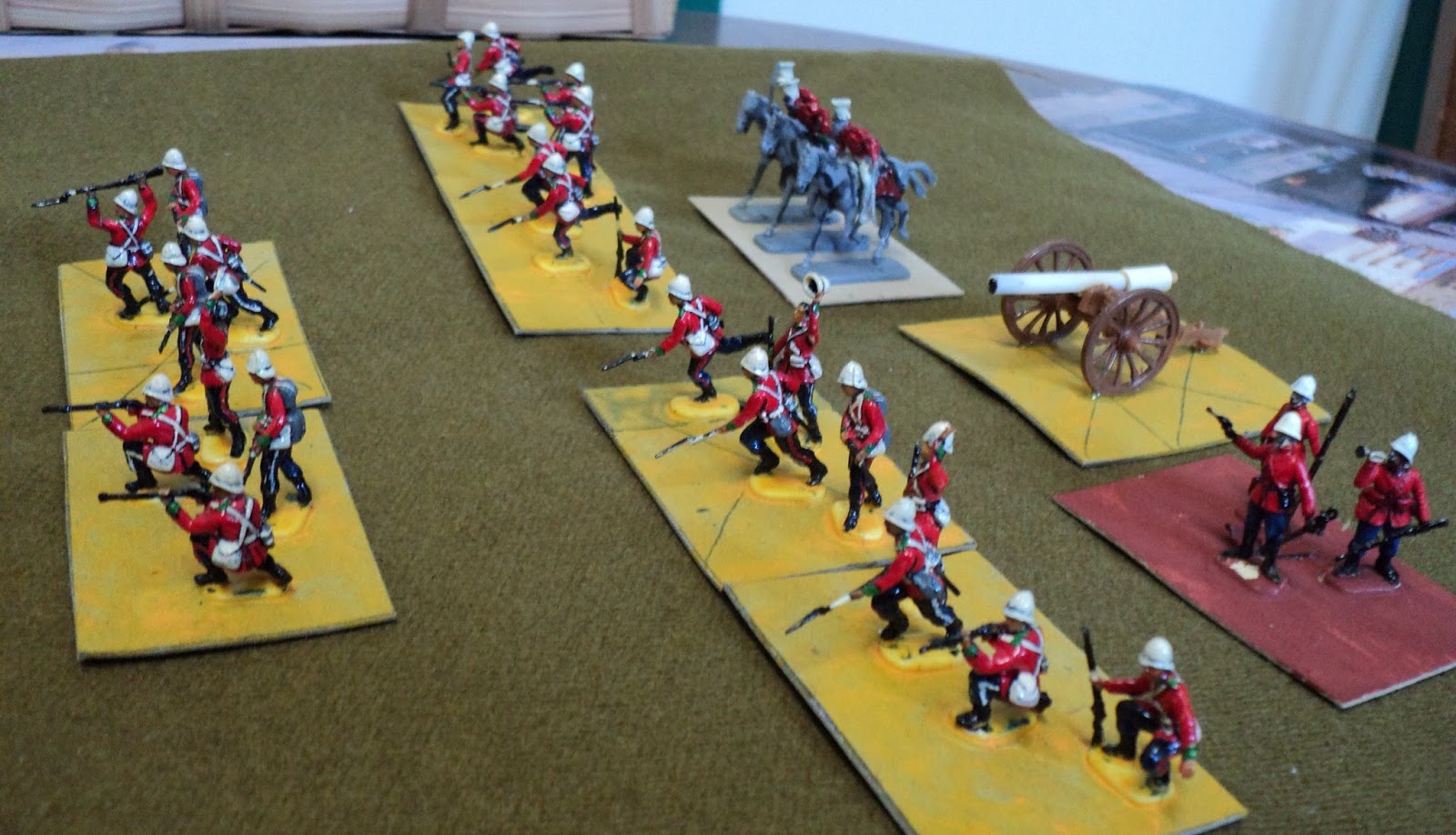 More or less consistent with Mr Cordery's vision, above is Ruberia's I Army Corps: 3 Divisions of 2 Brigades apiece, 1 Cavalry Brigade, Artillery Brigade, and a Corps command element.  Bob doesn't show this last in his organisation, but it does occur to me that such an element can represent 'Corps troops' - engineer/pioneer train, command, and possibly logistic support as well.  Just a thought. As it happens I don't have too many command figures, so I might have to rethink this (bigger Corps maybe?).

Ruberian 1st (and only) Cavalry Division (above, right).  These were given to me years ago (by Mark, of the Chasseur-a-cheval blog spot, clearing out surpluses), and as I hadn't the heart to do anything with the excellent paint work, all I have done is rebase them.


Army of Azuria - or at least part of it.  Or maybe it is one of several Azurian armies.  Here, this comprises I, IV, and V Army Corps.  Each Corps comprises 6 Infantry Brigades (3 Divisions), 1 cavalry Brigade and 1 Artillery Brigade (48 guns). I really would like to add a mitrailleuse stand...

Azurian Cavalry Division: 3 Brigades, plus command.  Should I add a horse artillery element? The stands, by the way, are much deeper than Bob Cordery's, to accommodate the rather looser formations of the second half of the 19th Century, more or less in accordance with the Phil Barker Horse Foot Guns game system (which I'm unlikely to take on).
Above, a close-up of a heavy artillery element in progress.  well, I would call it progress had any actual work be done on it for the last mumble years.  It is an ESCI Napoleonic British piece, its barrel replaced by what you see here as a rifled gun reinforced at the breech.  That knobbly bit at the back is from a brand of toothpick very useful for war gamers.

Posted by Archduke Piccolo at 1:27 PM