War of the Imperial Succession - Prologue 1.

The Ulrichstein uprising having been militarily crushed, and the rebellious subjects brought at least to civil, if not spiritual, obedience, it seemed for the moment that the Emperor Violoncello might see out his last days in triumph and tranquility.  It was not to be.  Sensing the Emperor's imminent demise, the political vultures within and without the Empire were already circling.  At least two signatories to the Emperor's expensively negotiated 'Prudential Succession' ensuring the crowning of his elder daughter as Empress were plotting the most cynical repudiation of their pledged word.

The Elector, the soi-disant 'King' of Altmark-Uberheim, not only sought an alternative candidate, but had his eye upon certain territories with which to round out his realm: the northern borderlands of Trockenbeeren-Auslese, for instance, and a sizable chunk, if not the entire, Ursaminor territories west of the Unstroll River.  For his part, the sly and discontented Constantine XXXIII, Grand Duke of M'yasma, was casting equally covetous eyes upon Ursaminor territories, not to mention historic claims (largely bogus) upon portions of Auslese.

But to the surprise of all, the first moves against the Pax Imperia came from without.  Far to the northeast lay the isolated Markgravate of Jotun-Erbsten, for long considered a neighbour notably pacific, considering their legendary giant forebears.  Its seaports icebound for several winter months, the need for a year-round maritime entrepot had been, with the development of pan-Europeian commerce, becoming increasingly acute - or at least, so argued the mercantile magnates of that country.  The volume of complaint from the Erbsten shipping magnates was beginning to suggest to the Markgravina's advisers that some solution to the problem had to be found.   If the Margravina Ekaterina ('Poppet' to her adoring subjects) herself remained indifferent to the moaning of the magnates, they found a willing enough ear in her chief advisor, the Chancellor Count Glutinus von Loeleiffe und Schleim (you know who the baddy is going to be, eh?).
The simplest solution seemed to lie in the acquisition of an already existing year-round sea-port, for nowhere along the Jotun-Erbsten littoral was a site suitable, even for founding an entirely new settlement.  The nearest such place was the burgeoning sea-port of Futtschtampen standing at the mouth of the River Unstroll, well inside the territories of the neighbouring Principality of Ursaminor.  Knowing full well that never in this world would Ursaminor cede for any price such an important centre of commerce, it was clear to the Count that the place had to be seized by force, and held by force.  Jotun-Erbsten could at least plead force-majeure - being compelled by simple but acute commercial necessity to undertake the spoliation of a neighbour's territory and wealth.

In a matter of less than a month, Count von Sleim had mobilized amid the greatest secrecy the entire field army of Jotun-Erbsten.  The Markgravina was informed vaguely of military exercises to keep the army in trim, and received news also of border transgressions - entirely invented by the Count himself - perpetrated by Ursaminor bandits and military personnel.  For her own part, the young and inexperienced Markgravina was inclined to send to the Ursaminor capital a delegation to discuss the matters that had arisen between the two small countries.  She even began assembling a delegation and began talking of a State Visit to Bjornburg.  Such preparations were, of course, likely to take several weeks, if not months.  All the same, the oleaginous Count saw in consequence that the wheels of his own schemes must be greased, and ordered the invasion to proceed forthwith. 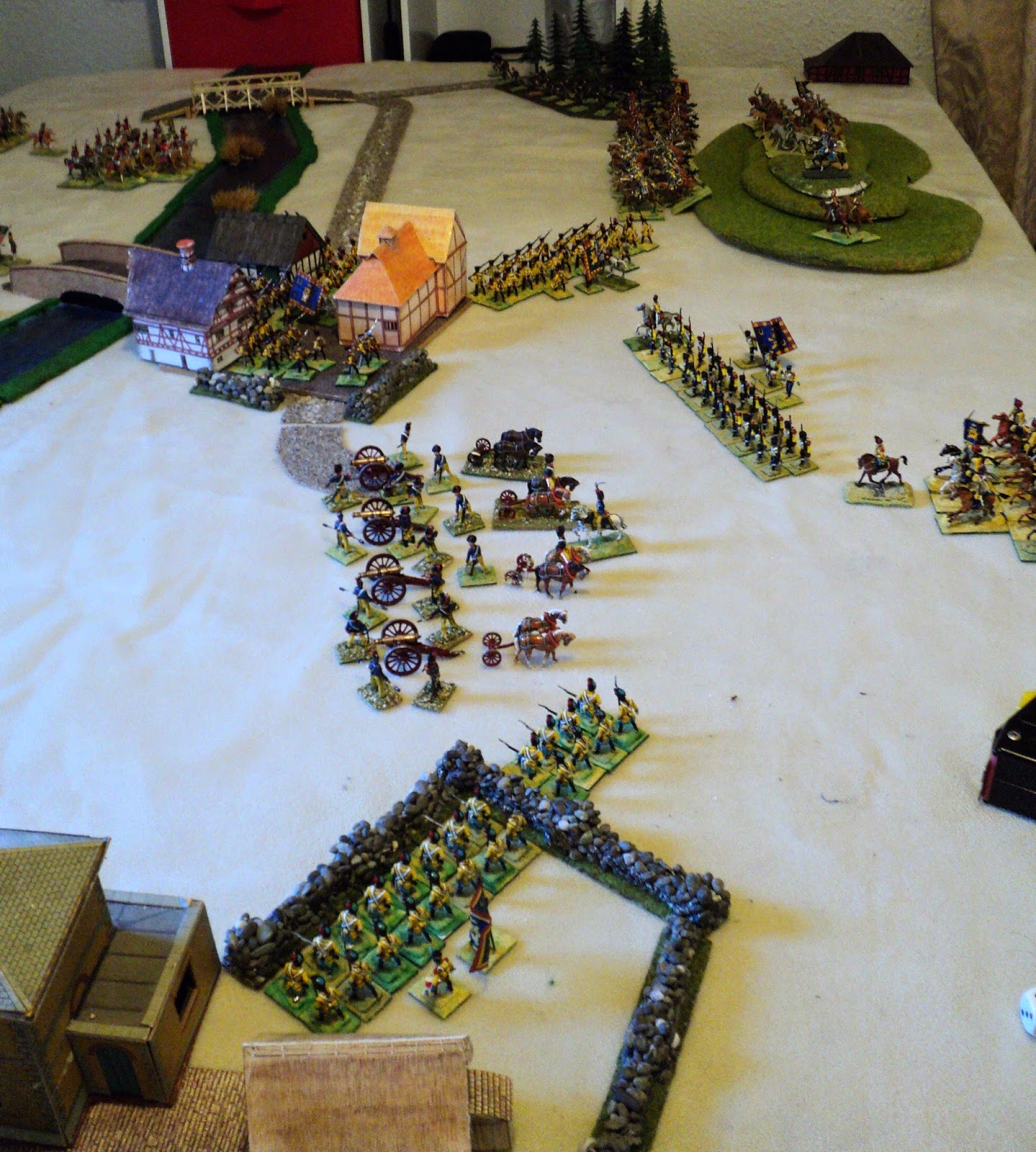 That the Army of Jotun-Erbsten failed to capture the Futtschtampen sea port in its first onrush was due entirely to the haste in which the whole emprise was undertaken. The Army of Ursaminor was entirely unready; its mobilization not even begun as Jotun-Erbsten columns crossed the eastern border.  Had the wily old Erbsten Feldmarschall Ernst von Schwerin und Cussin been in command of the invasion, perhaps much could have been achieved, and the Principality undergone at once the amputation of half its territory.  But that old soldier, fiercely loyal to his monarch, and a straight-shooter to boot, was known to object to the whole scheme, and was left in his Jotun HQ. The Chancellor took over command himself of the whole operation, with his nephew, Klaus von Klutz, newly promoted to General-Major, there to handle the military. 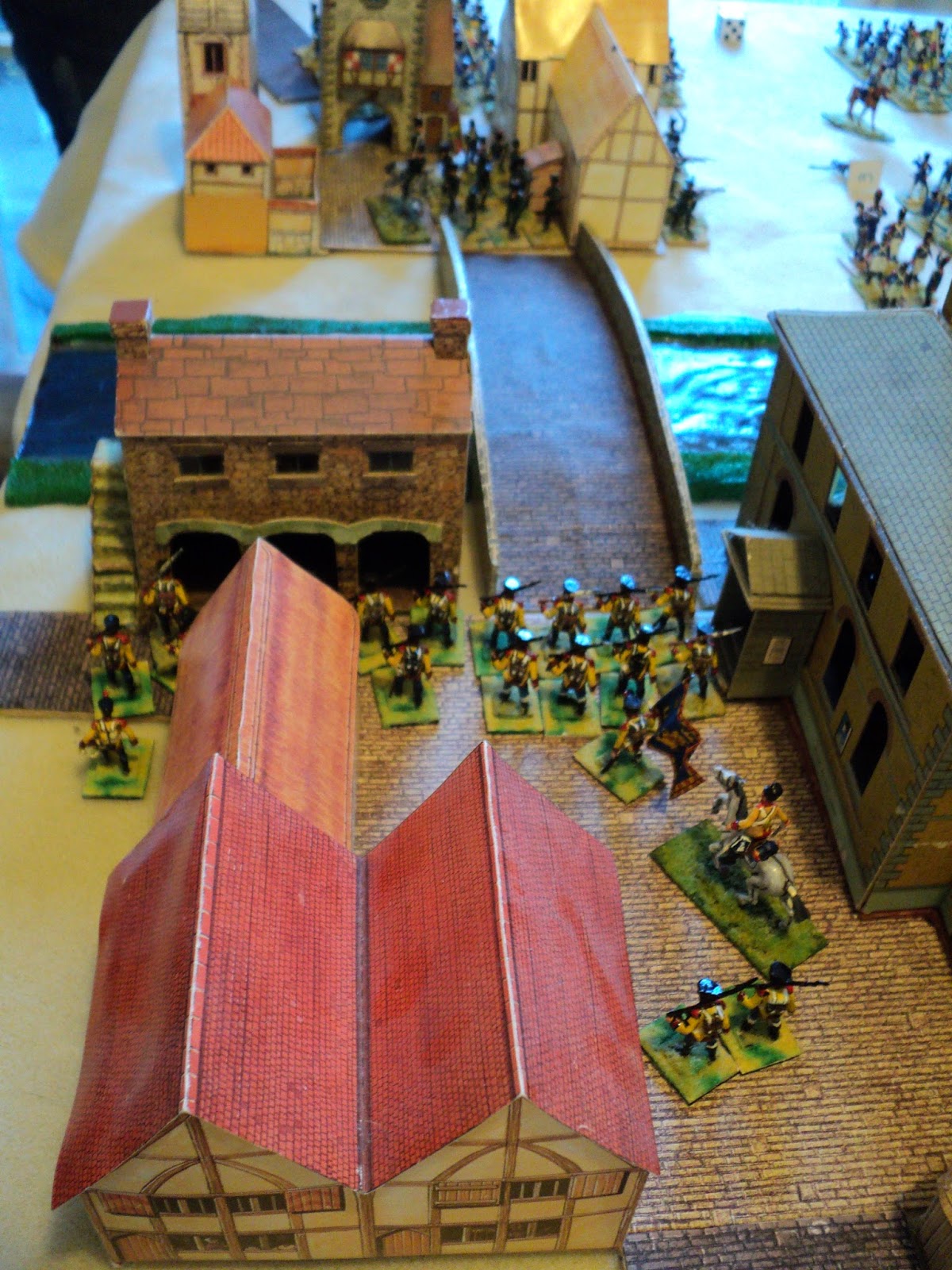 Familiar as he was with the ballrooms, back-stairs and closets of the court, Count Glutinus was far less able to negotiate the alien terrain of the open field. For one thing, he had failed to take into account the righteous rage of the Ursaminor population at this rude irruption into their lives and livelihoods. He allowed his army to become scattered from aimless meanderings over the countryside in the attempt to keep order.  Armed resistance was out of the question of course, but the hardy locals were capable of disturbances that threatened to cut off the Army's supply lines, and it was certain that the local peasantry stoically declined to victual the invaders.  The best part of a fortnight was thus wasted before the Jotun-Erbsten Army at last, in the dying light of an April afternoon, drew up along the east bank of the River Unstroll and made ready to cross the following day.  To the consternation of General-Major von Klutz, the campfires of the Ursaminor Army could be discerned in the gloaming lining the far bank.
If Jotun-Erbsten wanted Futtschtampen, then Jotun-Erbsten would have to fight for it.

To be continued;
Acknowledgement:  Thanks and welcome to Ernest, the 106th follower of this blog spot.

Posted by Archduke Piccolo at 5:58 PM