War of the Imperial Succession - Prologue 2

Continuing the narrative from here. 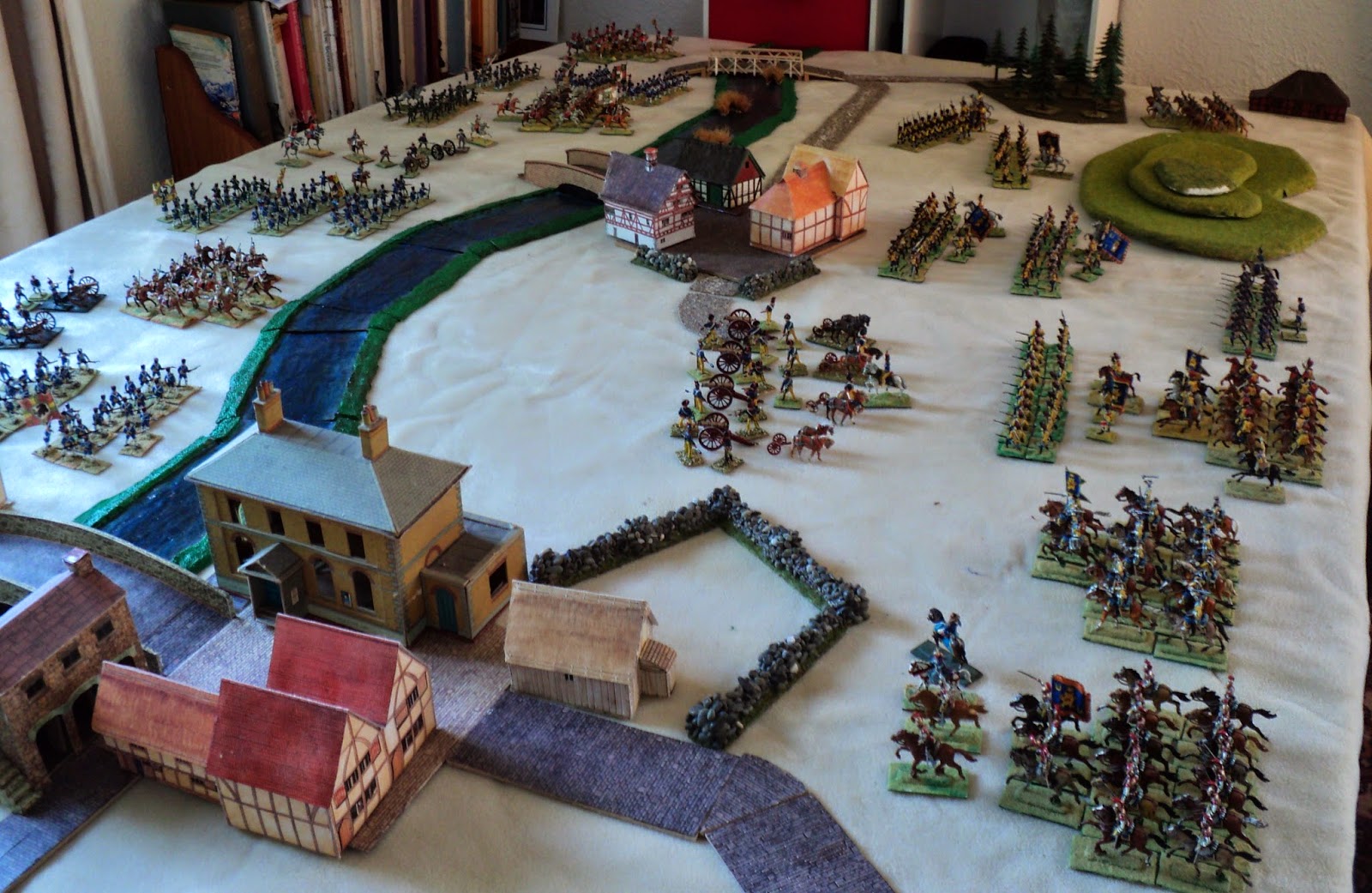 The breaking dawn revealed to the gaze General Klaus von Klutz the bulk of the Ursaminor Army on the far bank of the Unstroll River, ready to contest the crossings.  There were three bridges, the one at Futtschtampen, another at the outlying upstream village of Armtouisten, and the third as far higher again. Given the relative strengths of the armies, it was highly desirable from the Jotun point of view to find additional crossings as well.  This was going to be a tough assignment, but rewards for success far outweighed, so it seemed to the Jotun-Erbsten High Command, the penalties for defeat. 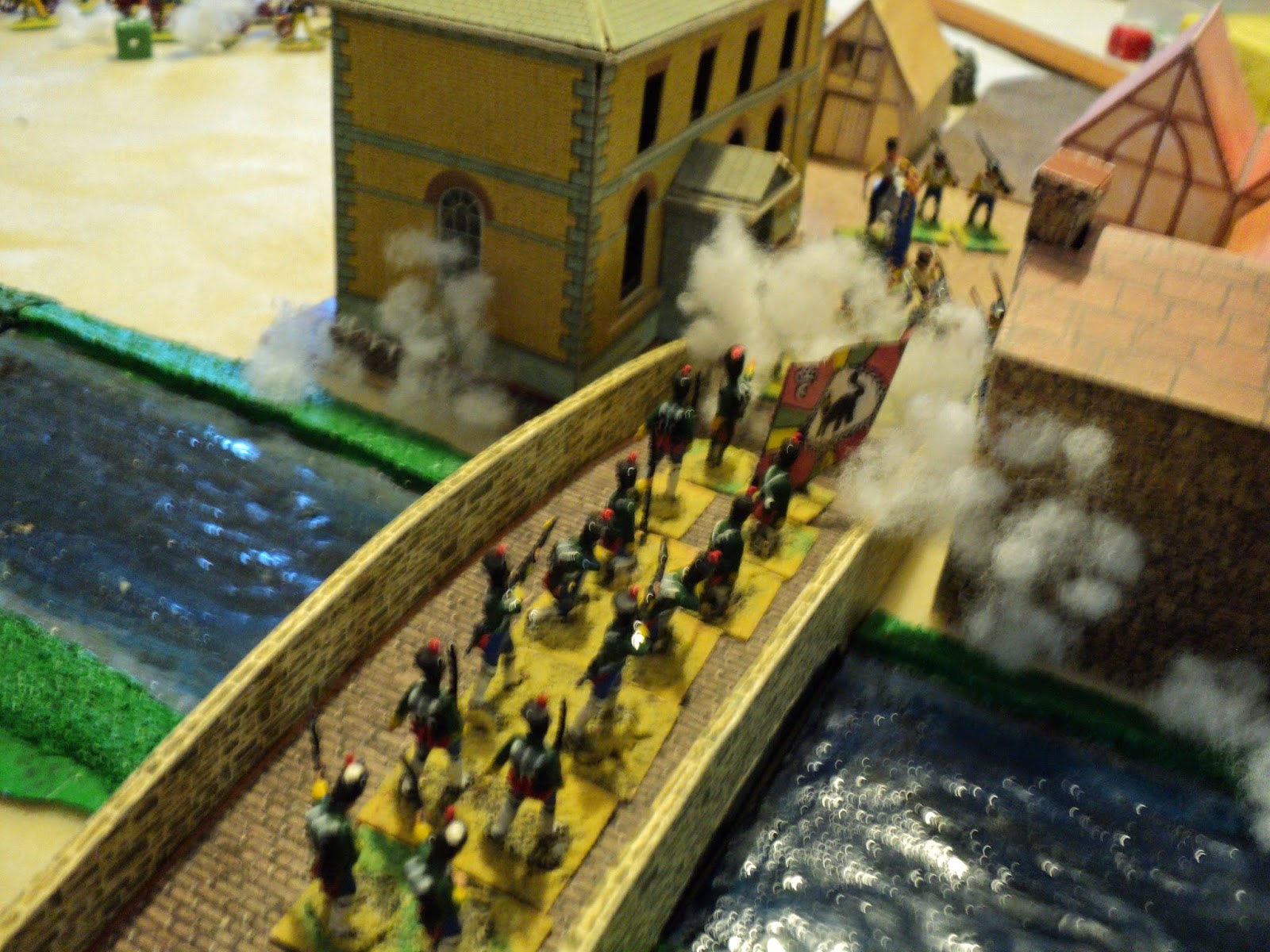 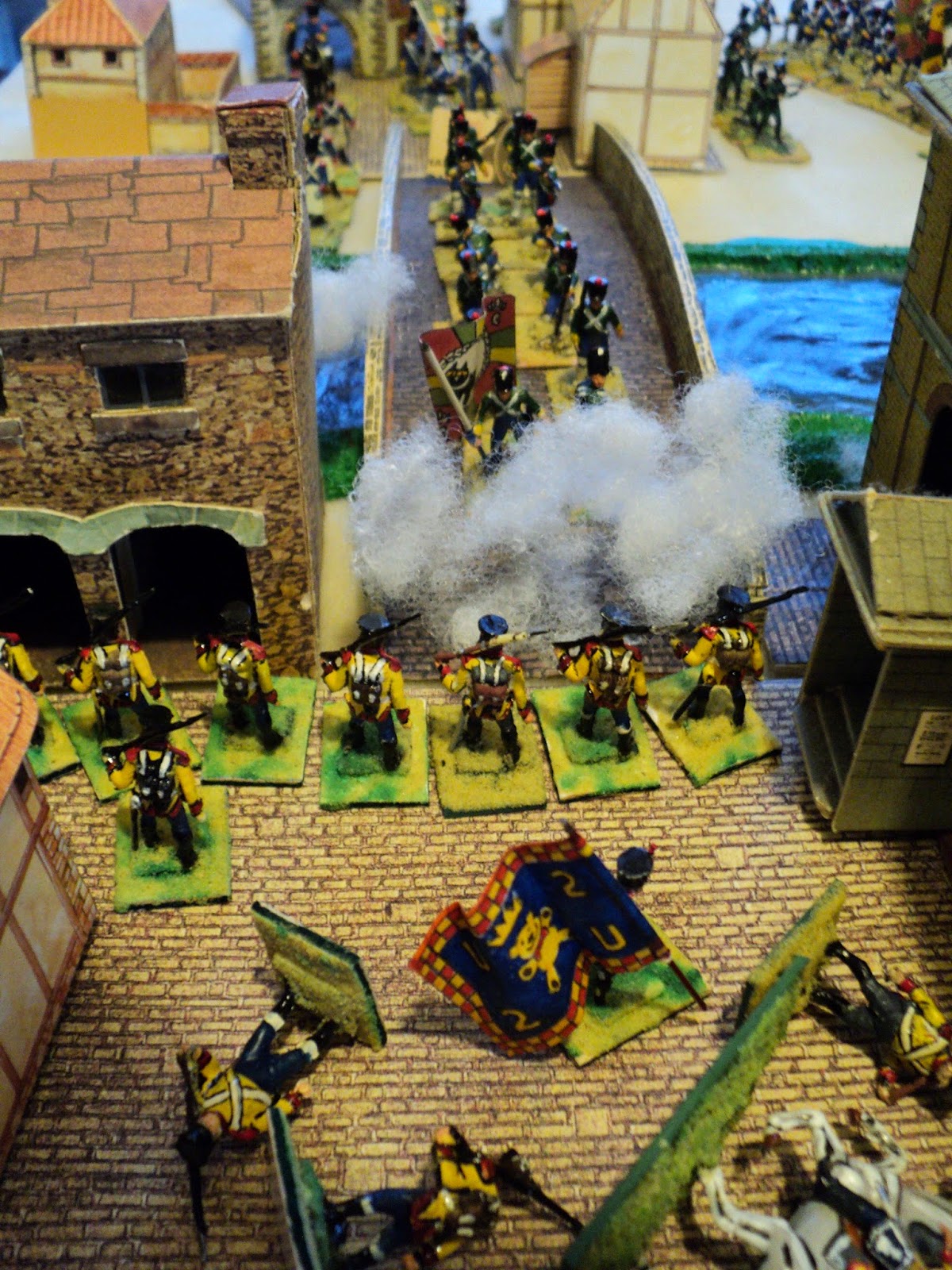 This action was fought between Paul Jackson (Painting Little Soldiers) and myself earlier this year.  As I had this game set up at my place, I invited Paul to choose sides, bearing in mind which side was doing the attacking.  All the troops were in plain sight, and I expected him to defend.  Nope.  Attack was his choice, and so he took command of the Jotun-Erbsten invaders.  I half suspect his didn't fully notice the bigger size of the Ursaminor battalions that made up the disparity in unit numbers (not to mention that Ursaminor has a significant proportion of guards and grenadiers - types not present in the army of Jotun-Erbsten).

Considering the difficulties faced by the invaders, they came very close to pulling off the near-impossible.

General von Klutz chose to put his main effort in and around the objective of the whole campaign: the sea-port of Futtschtampen itself.  The Ursaminor commander, Marshal-General Maxim Stalhandske, abandoning the transfluvian suburbs, had garrisoned the western half of the town with the Sodermanland infantry - blocking the bridge and occupying the warehouses and manufacturies of the dockyard district; whilst the Livgarden Regiment fortified the commercial and administrative precincts.

Erbprinz Brigade led off the Jotun assault,  supported by musketry from 7th Jager.  But the 5th Battalion, charging across the bridge, was brusquely stopped in their tracks by the storm of musketry from not only the bridge defenders by the flanking garrison companies as well.  The Jotun-Erbstenites barely made it to the centre of the bridge, before being swept back whence they came. 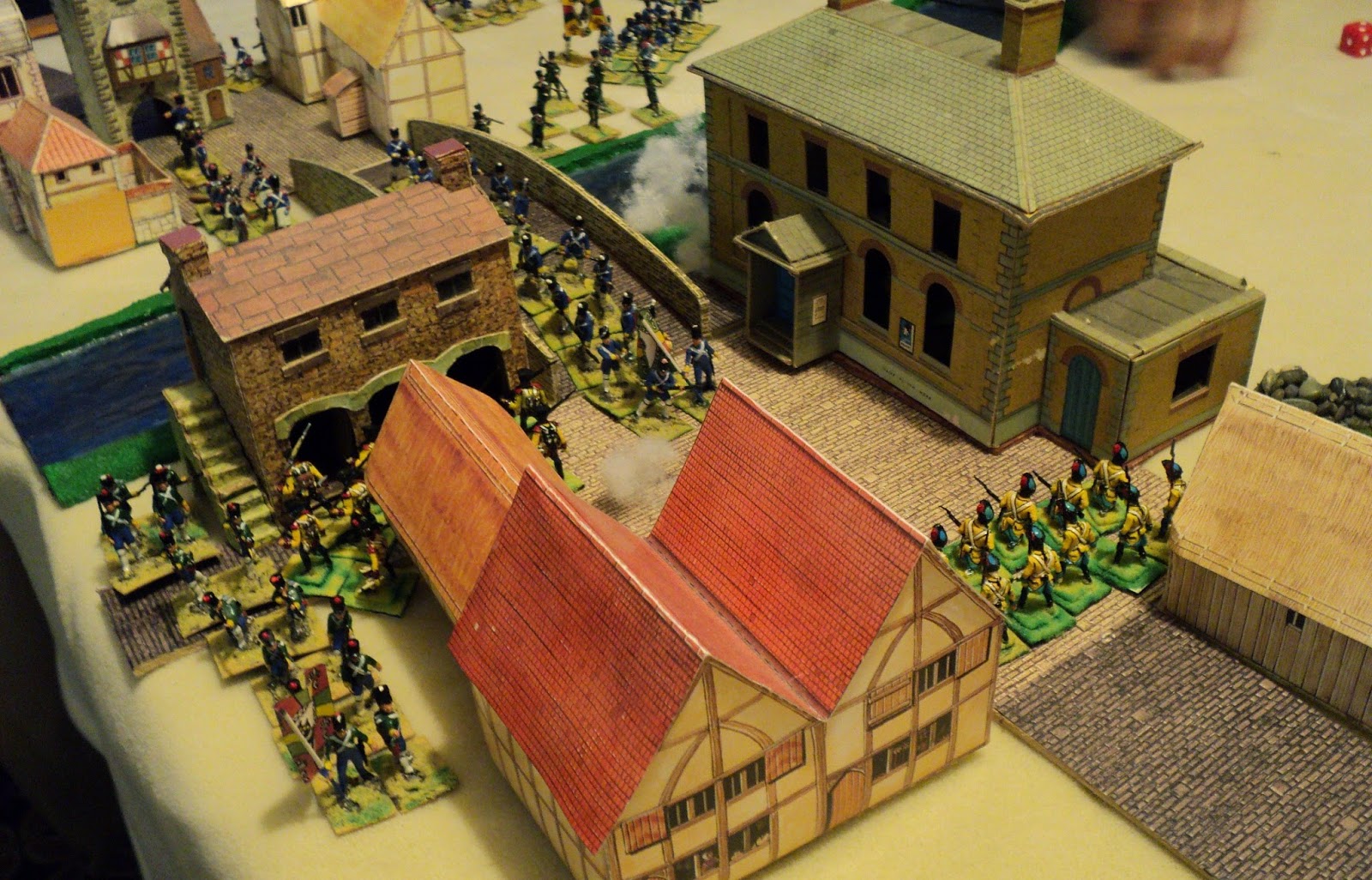 Nothing daunted, General Klutz ordered in immediate renewal of the attack.  The failure of the bridge defenders to erect any effective barricade proved their undoing.  The 10th Fusilier Battalion flung aside the defenders, and surged on into the residential quarter of the town.  Immediately following them, 6th Battalion forced the Livgarden Regiment out of the barns and holding pens of the southwest quarter but also the Sodermanland companies to evacuate the Admin quarter.  Ensconced behind the masonry walls of the mercantile district about a third of Sodermanland kept up a steady but ineffectual fire upon the Erbprinz Brigade as the latter tried to consolidate its hold upon the town. 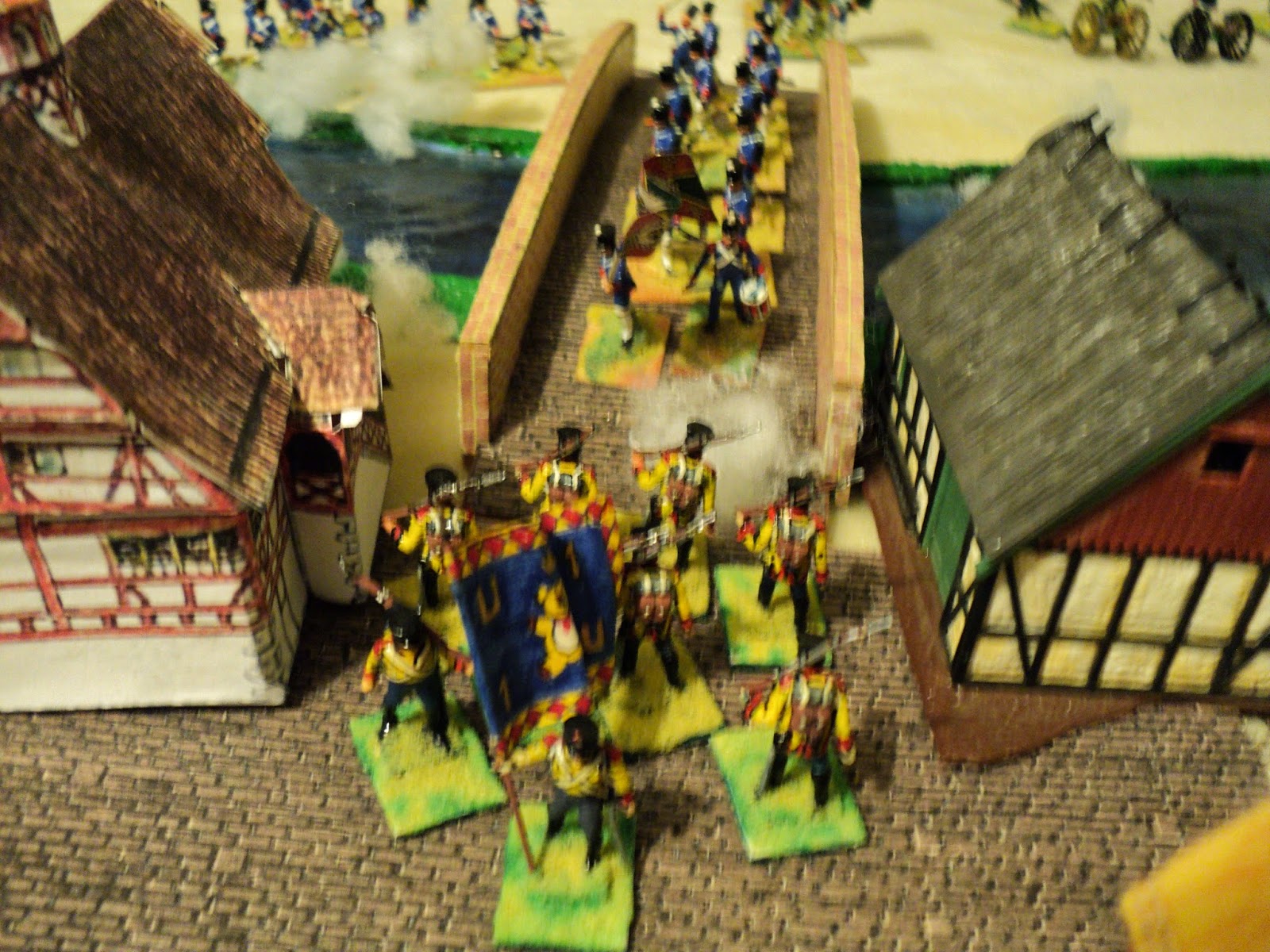 In the meantime, the Erbsten Engineers has discovered an easy ford not far south of the town, whereat General Klutz ordered 3rd Battalion of the Markgravina Brigade to make the crossing.  But he had underestimated the likely effect of the massed Ursaminor artillery immediate overlooking that part of the river ...

(This was entirely fortuitous.  Having laid out the troops for inspection, when it came to the actual deployment, it seemed to me that where I had placed them was fine.  So there they stayed.  The fords were determined entirely by dice roll.  Foe each river section (straight or curved) a roll of 6 would disclose a ford, which was then rolled for type.  This one was easy.  However, we were to discover a glitch in my rules that made easy fords on widish rivers more time consuming to cross than difficult fords.) 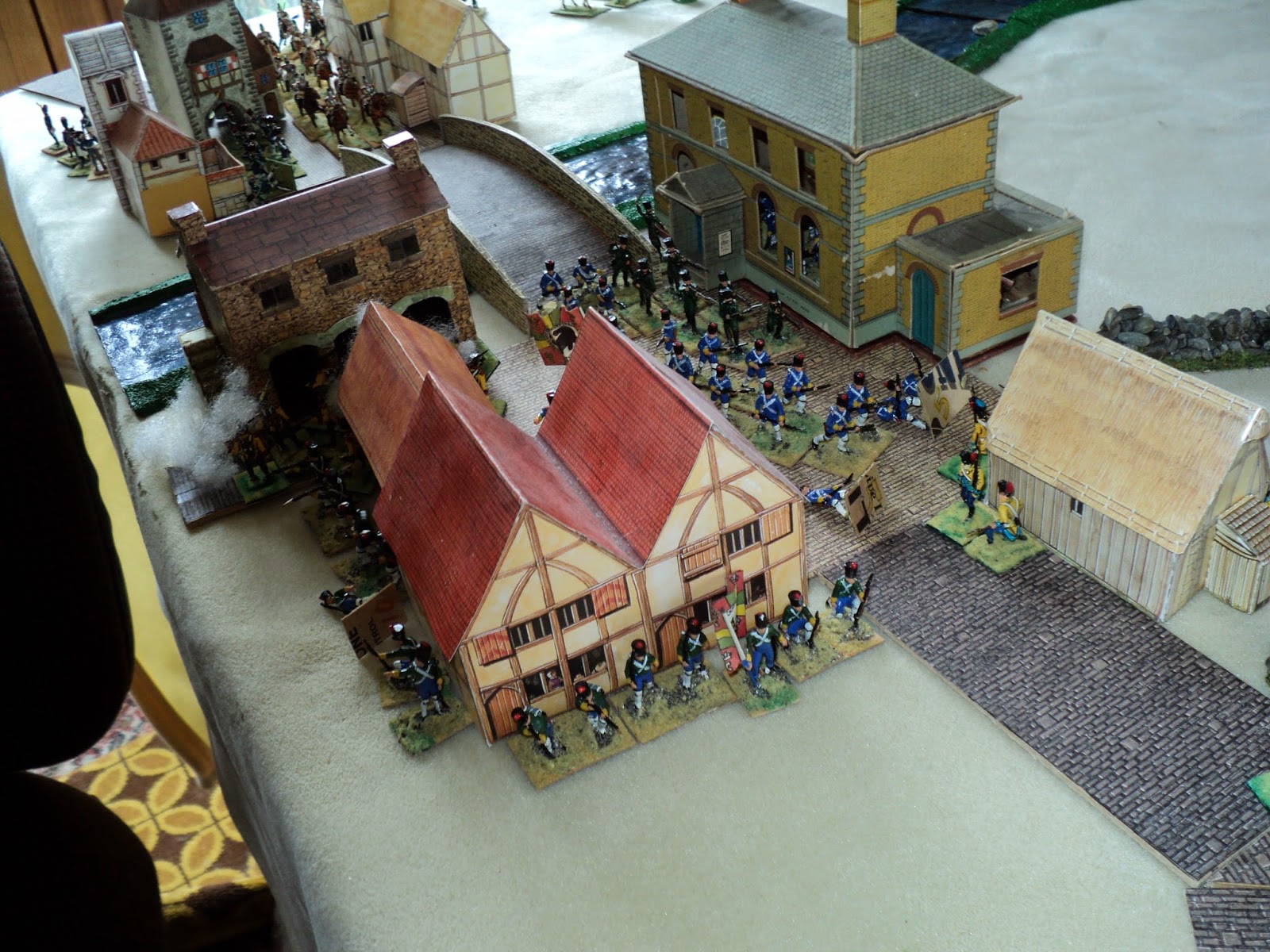 Half way across the stream, 3rd Battalion were emphatically pounded into withdrawal, scarcely half their numbers surviving.  However, this disaster was at least partially offset by 1st battalion of the Leib Brigade successfully storming the river bridge at Armtouisten.  the convergent gunfire on the place had already induced the garrison to abandon the buildings, whereupon the bridge defenders were too few to overcome the storming column as it surged across. 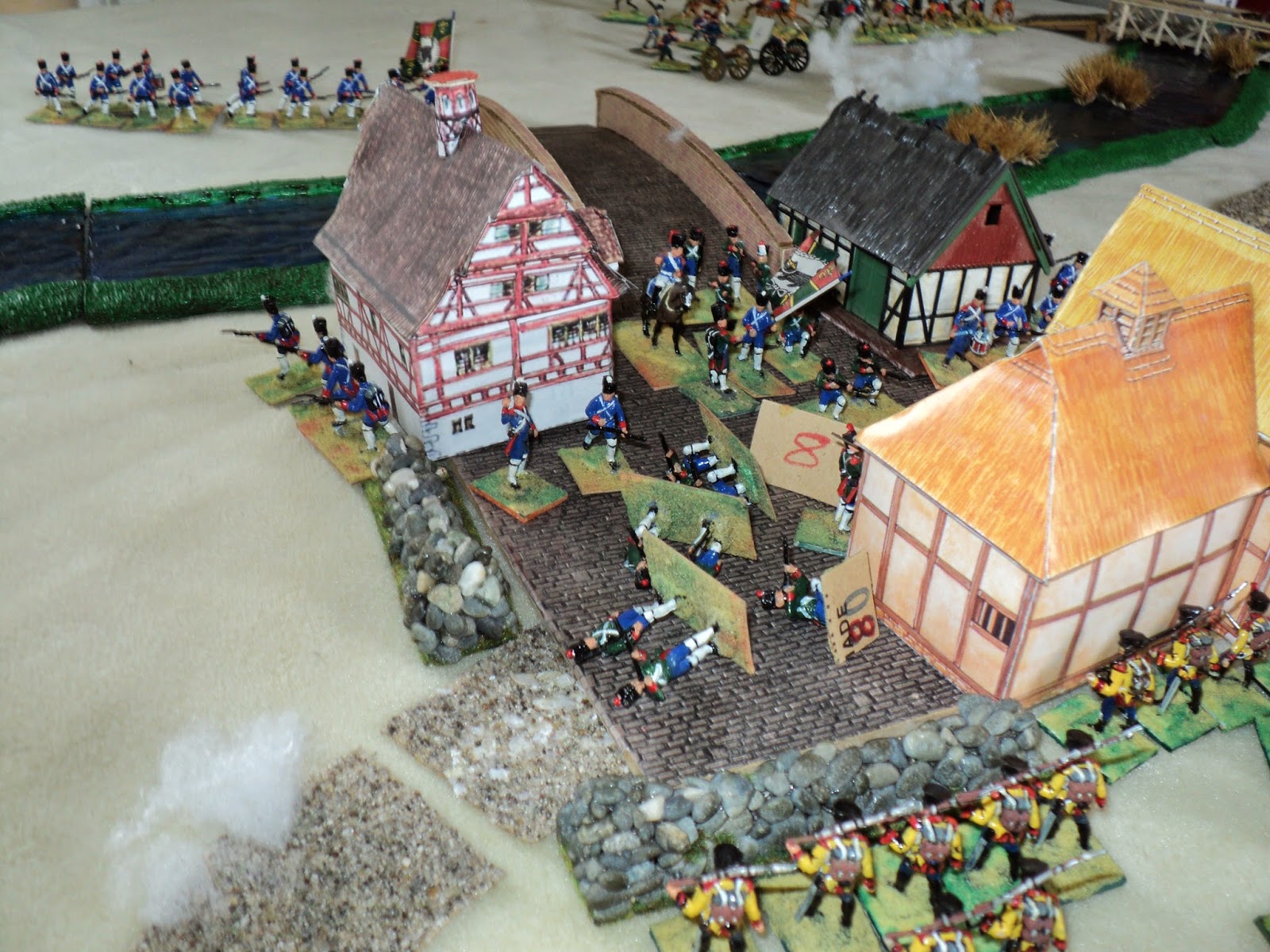 The bridges secure, General von Klutz didn't hesitate to press further troops into both localities.  But exploiting their success was proving not so easy.  In Futtschtampen, the company and a half of Sodermanland infantry seemed to have burrowed themselves firmly into the solid buildings of the mercantile district.  Even outnumbered four to one, there was no digging them out again.    Nor were the Leib Brigade able to drive the Ostergotland infantry completely out of Armtouisten.  Passing through 1st Battalion, the 8th Fusiliers tried to storm the west end of the village, only to be flung back rudely by the shortrange Ostergotland fire. 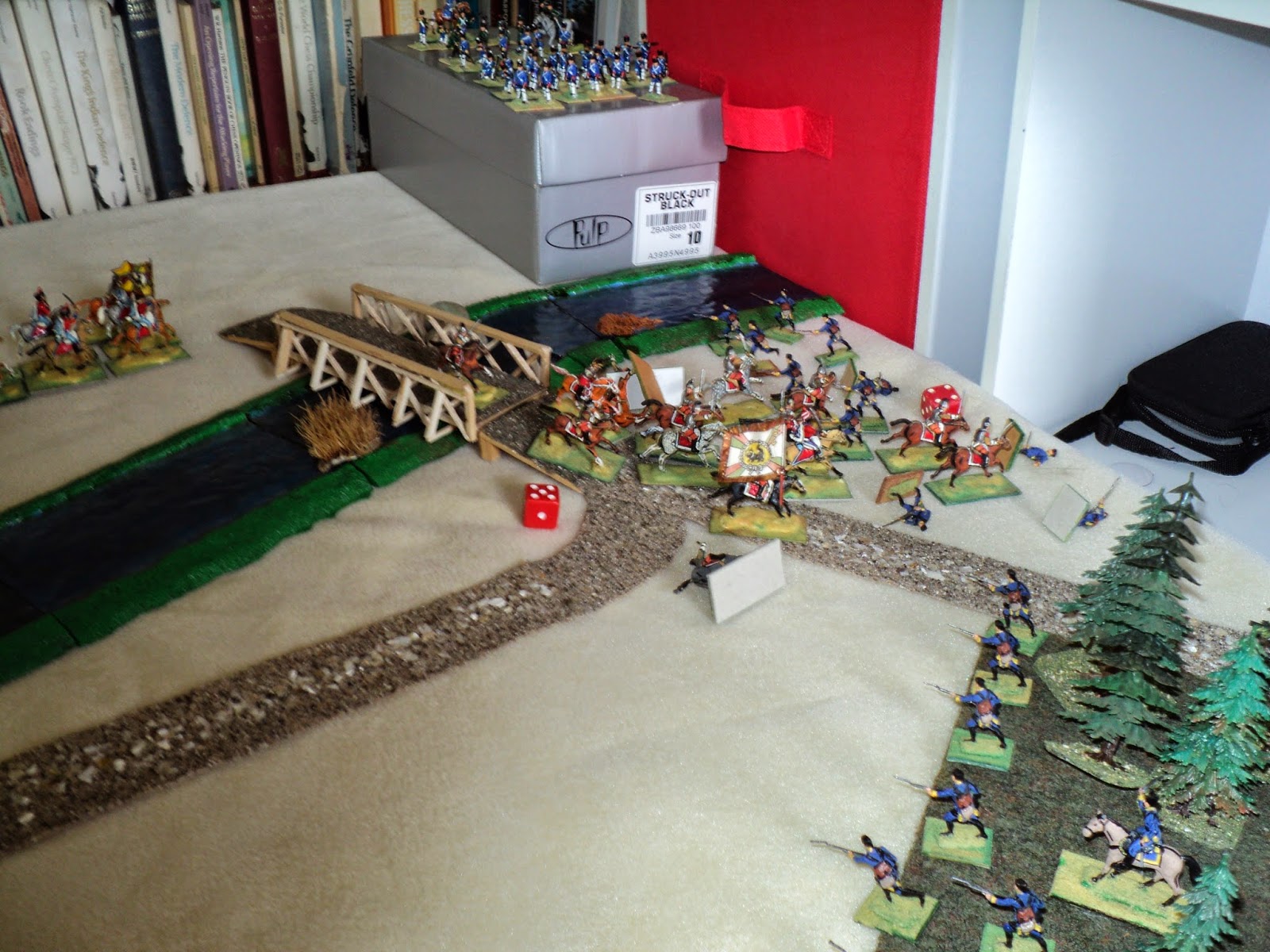 Stalled in his pricipal attacks, in desperation, General Klutz ordered his cavalry to make an attempt upon the southern-most bridge.  There he may have been persuaded by the discovery of a narrow ford hard by the bridge, or maybe it was the half-battalion of enemy light infantry crowding up to the riverbank to harass the Jotun-Erbsten horse beyond.

In a flash, 2nd Cuirassier Regiment had clattered across the wooden bridge and were riding down the exposed jagers with sword and pistol.  But the jagers had emptied several saddles before being overrun.  At that, the other half-battalion were safe enough within the nearby woods; and rather late in the day, Ursaminor vengeance was approaching fast at a canter.  There was nothing for it but to leave, and that right soon. 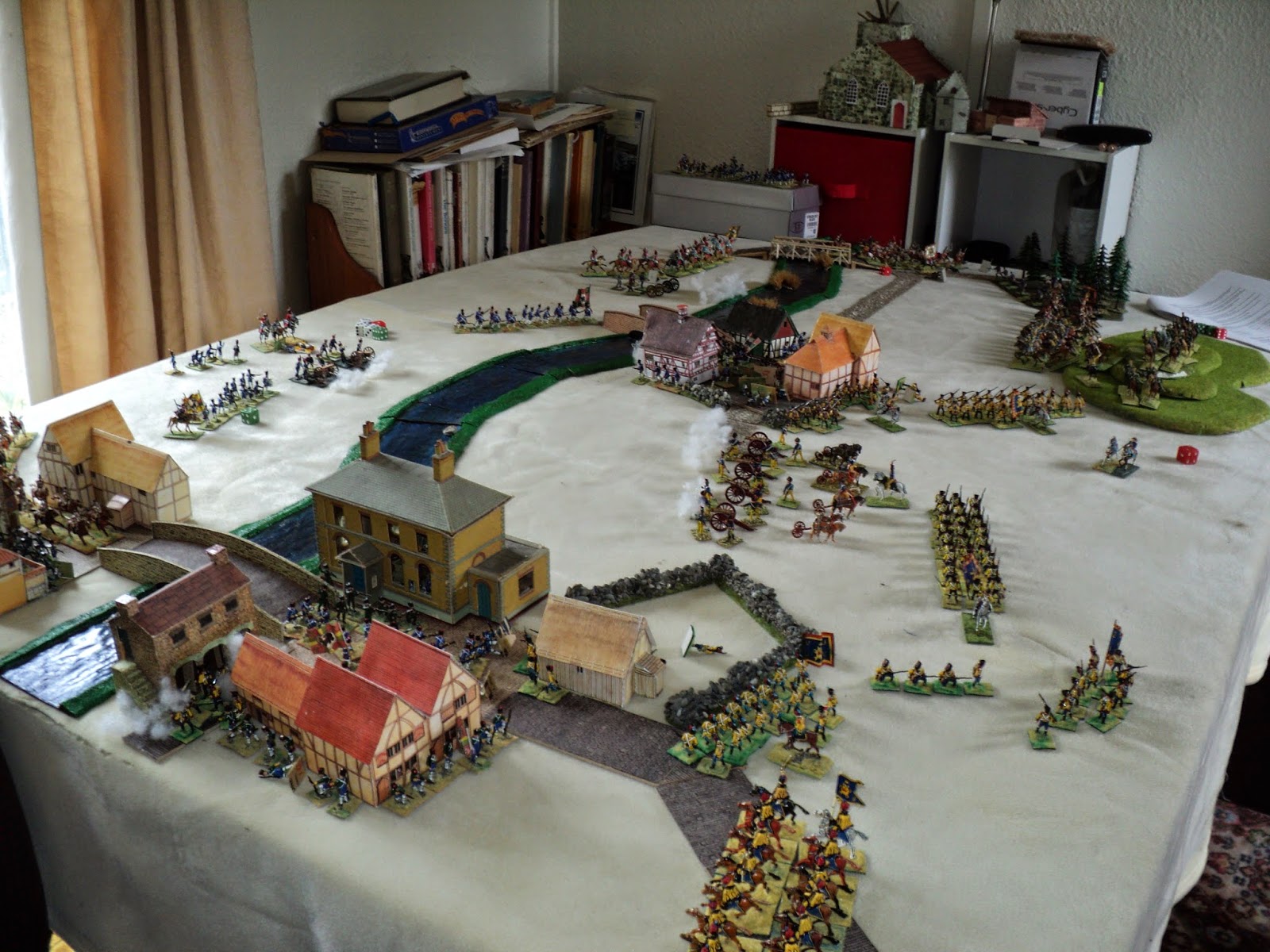 By this time the morning had advanced to early afternoon, and it had become clear that having successfully broken into the towns, the invaders were not easily going to break out into the open country beyond.  Losses had been unacceptably high, Jotun-Erbsten reserves slender, and Ursaminor stood ready to contain further encroachment.  It was at this point that a parliamentaire under a white flag was seen approaching the Livgarden lines close by Futtschtampen.

Acknowledgements:
My thanks and a warm welcome goes out to two new followers:
#108: 'Stryker'
He has or contributes to 5 blogs at least, a couple of ACW campaign blogs (I'll be looking into those!) and a couple on vintage (?) metal figures (e.g. Minifigs 'S' range, and Hinton Hunt).  I reckon this might be the place to enquire whether I have correctly identified some figures in my collection that I acquired second hand several years ago.  I gather he also recently celebrated his silver wedding anniversary.  Congratulations!
#109: 'Ariel El vikingo dark'
Here's another with multiple blog spots that have been interesting to explore.  Some very fine music to be heard there, too: stuff I've not heard before, but very suited to my tastes (Vaguely similar to Nightwish, what I've heard so far.  Well, I like Nightwish)  Check out his (?) 'follower' icon, but here's a good place to start...

Posted by Archduke Piccolo at 6:35 PM