The Play test, continued from here.

The Division of Loison, followed by the Corps Artillery, Marshal Ney himself and the Corps light cavalry marched westwards along the south bank of the Danube River to force a crossing close by Elchingen village, whilst Dupont's division pushed westward towards Albeck (just off the table along the road heading north.


The brigaded voltigeurs (4 figures) led off the French attack to protect the rest of the corps troops as they crossed.  They were soon augmented by as many chasseurs of the light infantry (I enacted that one French Division would have an extra skirmishing capability, which allowed 8, rather than 4, skirmishing figures  to become available).  This proved quite a stiff fight, though the fact was that the Austrian Grenadiers' extra firepower (3 dice per 2 figures, 6s to hit, as against 1 die per figure), was more than compensated for by the light infantry's dispersion (ignore the first 'hit').
The grenadiers were drawn up in two lines, and were also supported by the Austrian artillery.  The latter proved mightily ineffective all day (we might have to look into this, as the French Artillery didn't achieve a whole lot, neither).   The first line of grenadiers might have closed the range to drive off the importunate voltigeurs and chasseurs, but perhaps that is an option we could try another time. Suffice to say that after drawing first blood, the grenadiers were out shot, pretty much, in the ensuing firefight. 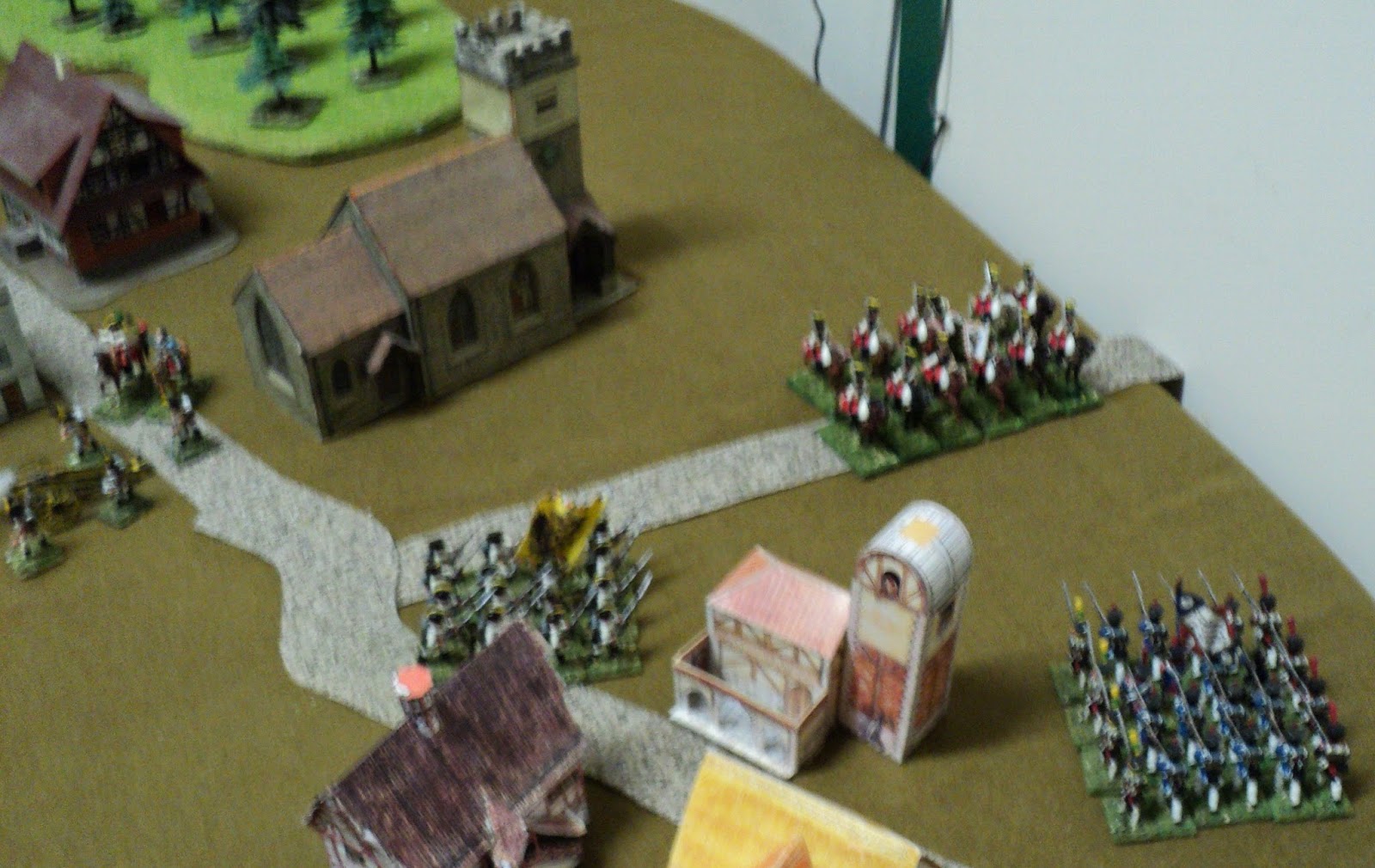 Meanwhile, the Austrian cavalry and the fusiliers were ordered to confront Dupont's Division, approaching the Austrian left rear.  This led to something of a dilemma for Dupont: whether to retain his column formation, or form square in the face of the enemy heavy horse.  In the event he chose the latter.
In front of Elchingen, the first line of grenadiers, losing the musketry duel, were driven in upon its supports (This also led to some consideration having to be made how this is going to work.  I had them halt still facing front, immediately before the second line, but it might have been better to have them pass through to stand immediately behind.  If that meant that the second line had to move forward to leave enough space between themselves and the buildings to accommodate them, that sounds reasonable. )  Behind the French light infantry, the remainder of Loison's Division had formed up in an assault column and was about to advance.  The light cavalry were now beginning their crossing.  All this while the French artillery kept  banging away across the river without much visible effect. 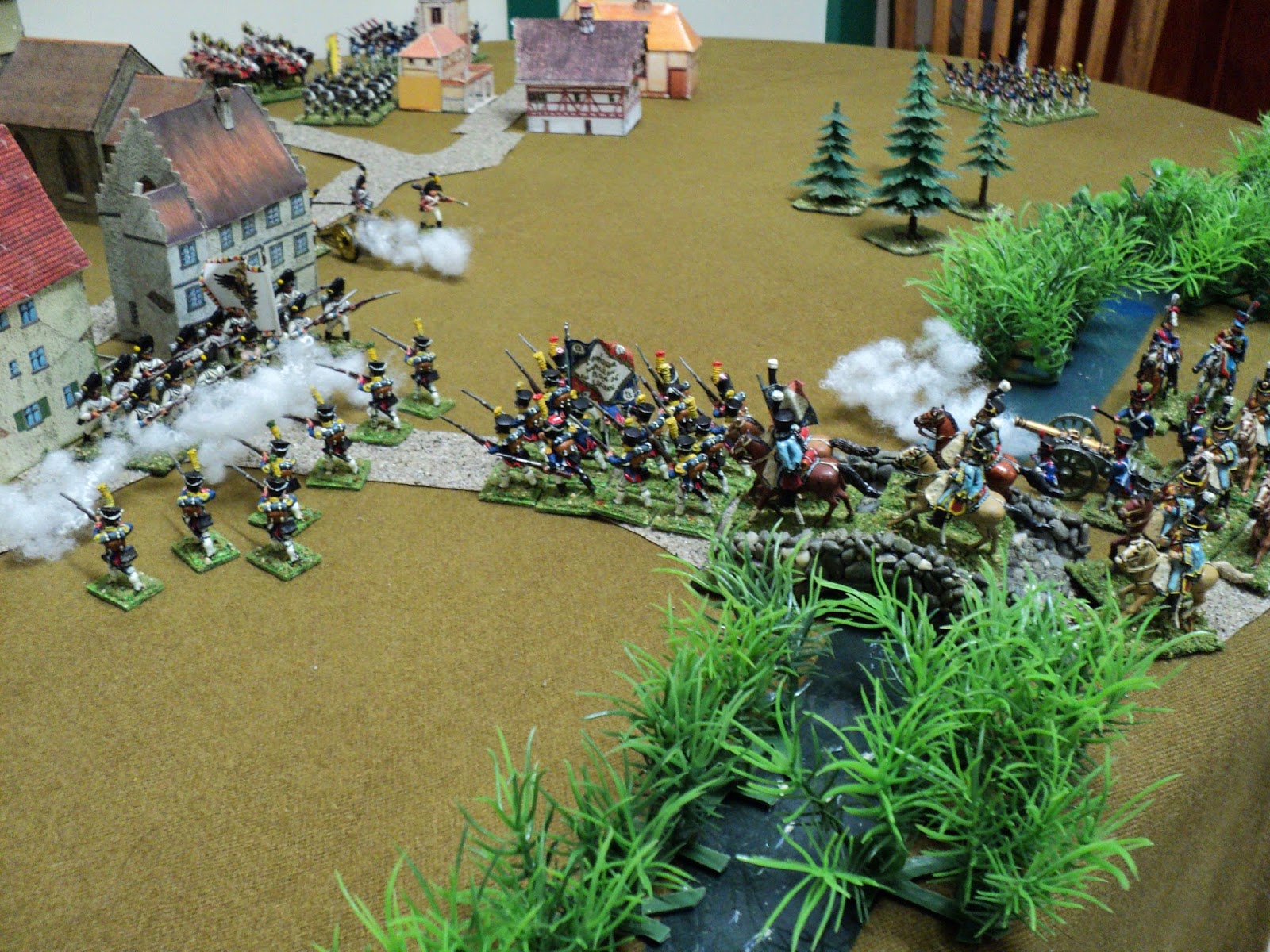 As Dupont's Division formed square (I chose one large Divisional square here; the jury is out whether forming two 'brigade squares' ought to be an option) the Austrians closed the range.  The French knocked over one Austrian fusilier, but otherwise the mutual musketry duel didn't amount to much. 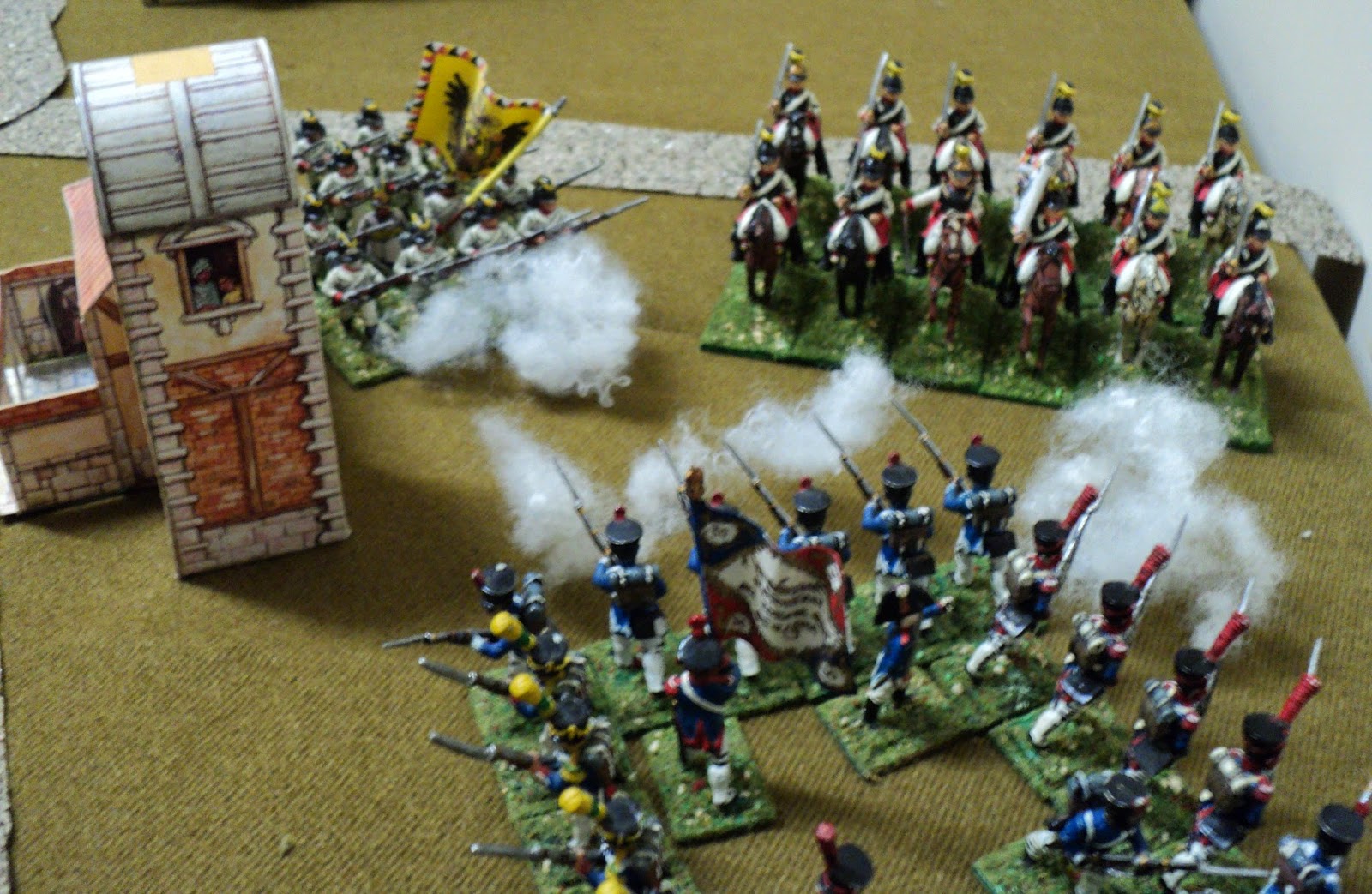 At about this time - 11 a.m. (Turn 4) - Mahler's Division was putting in its appearance from south-east of Unter-Elchingen.  The three following pictures offer a panoramic view of the battlefield. 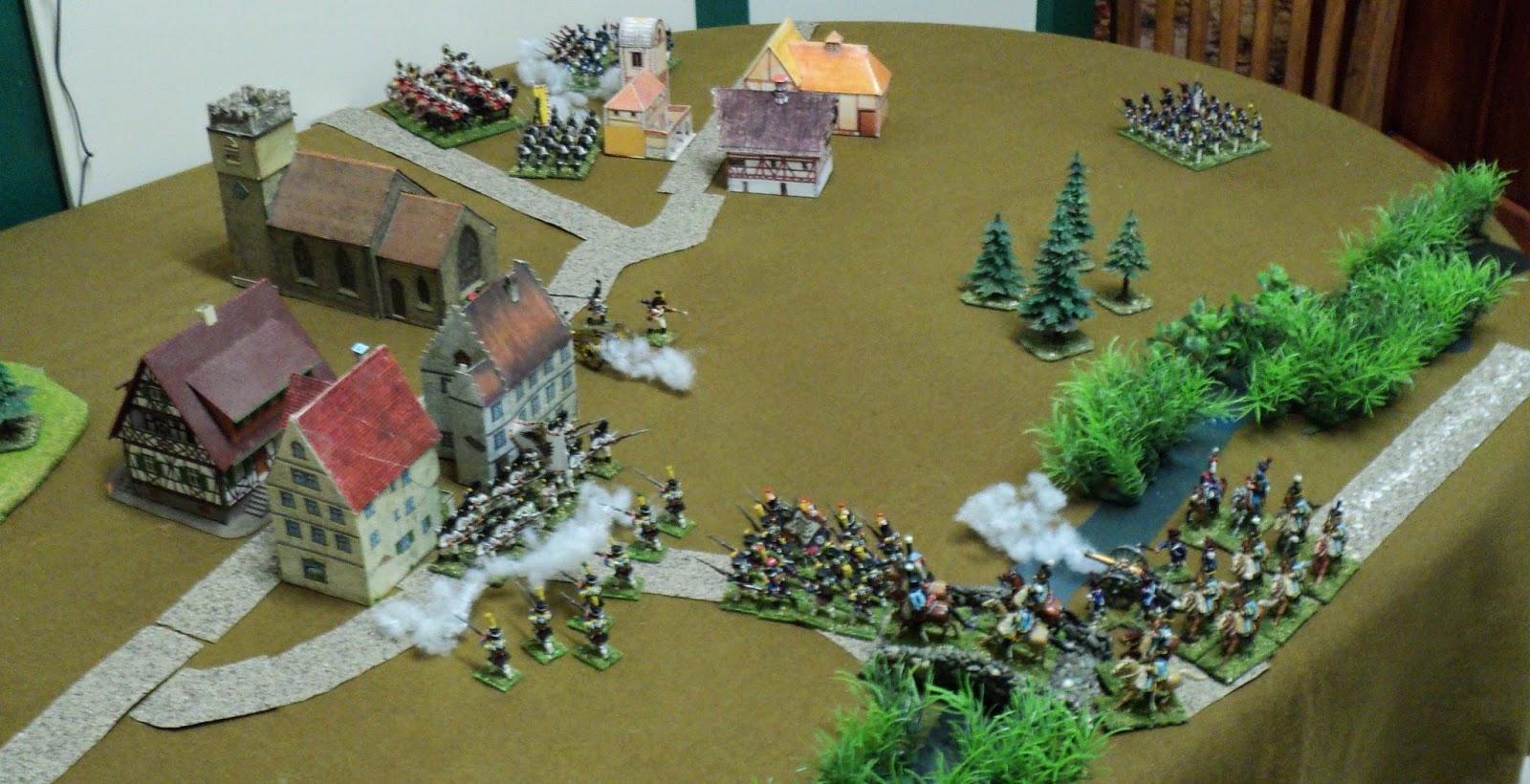 At Elchingen, the first line of Grenadiers were driven in completely, leaving the second line to take up the cudgels. 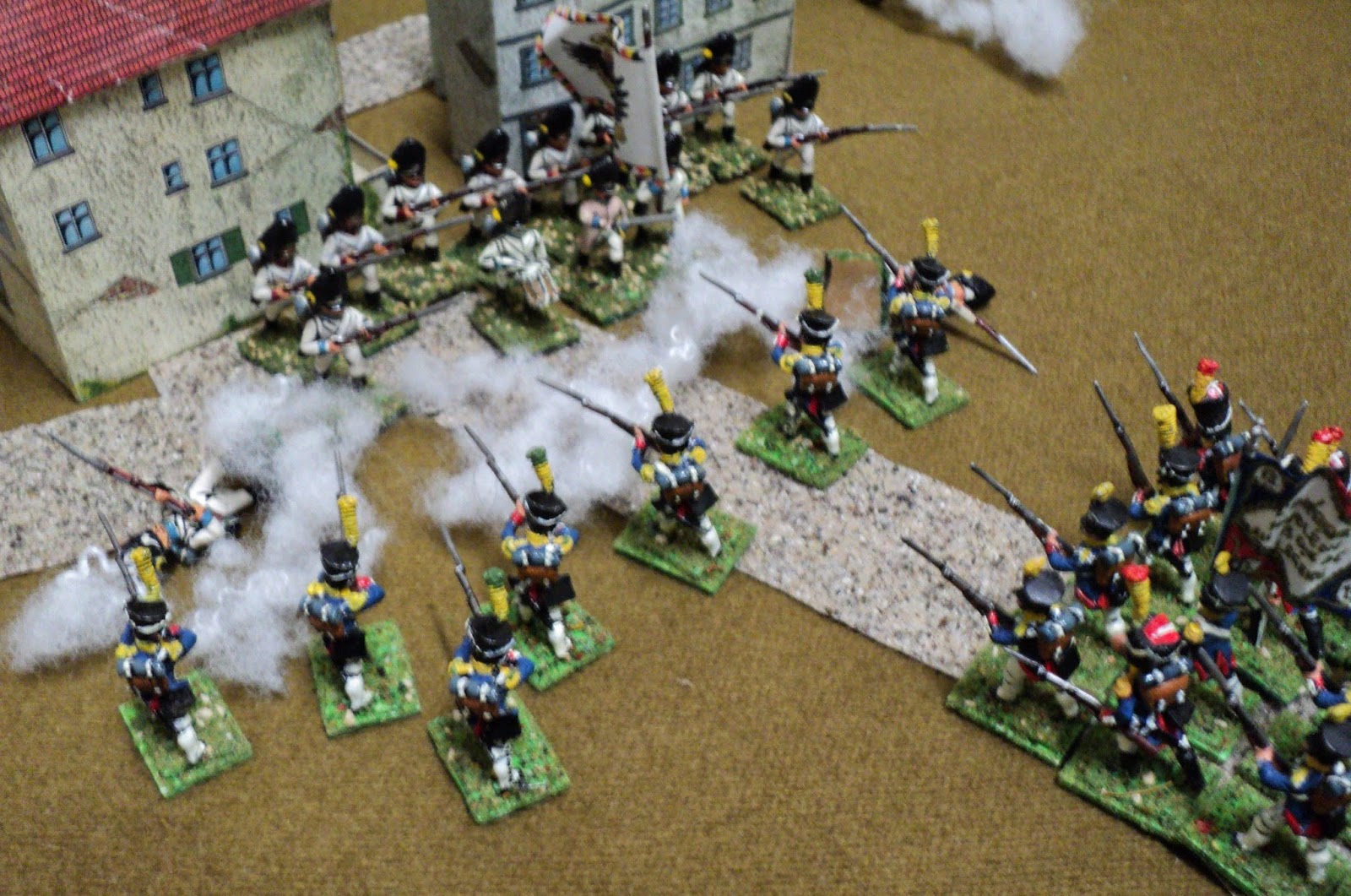 As the close quarter firefight continued the French horse swung off to the left to outflank the town from the west. 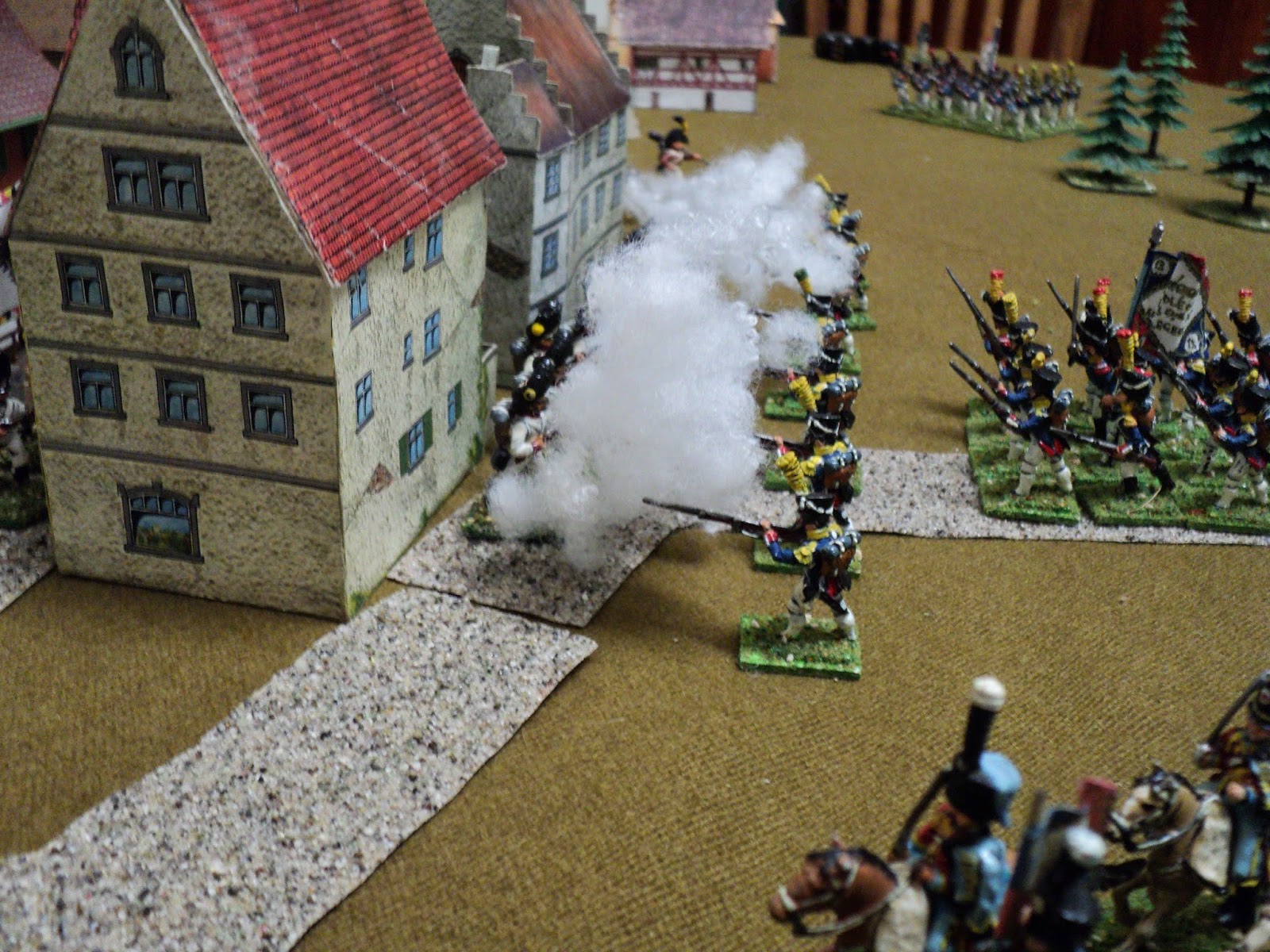 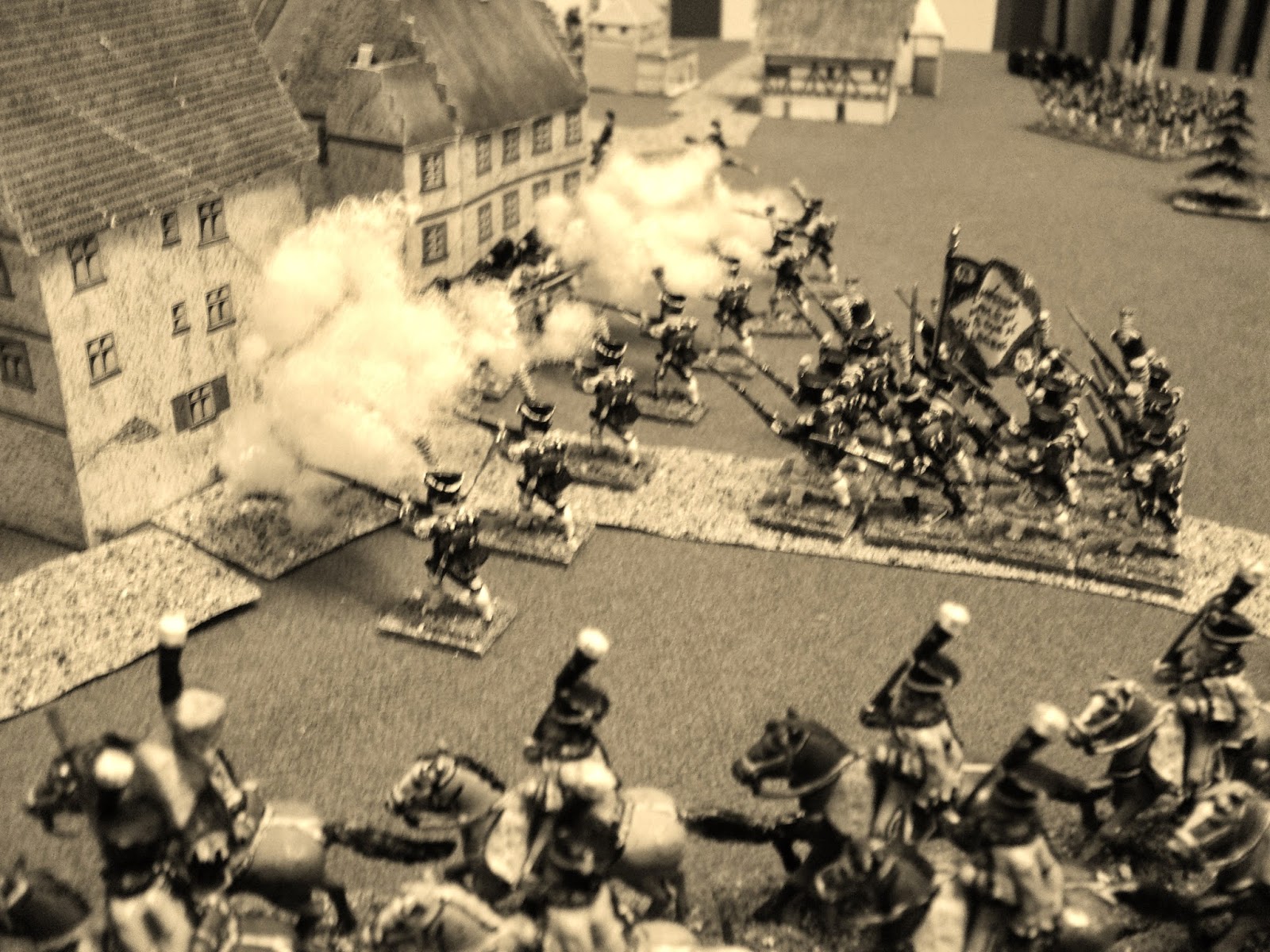 Although the grenadiers saw off the skirmishers with loss, they were almost immediately assailed by at least double their numbers of close order infantry.  Crippled by their own losses, the grenadiers were so reduced that at last, their resistance broken,  they were reduced to a crowd of fugitives fleeing through the town and the Grober Woods beyond. 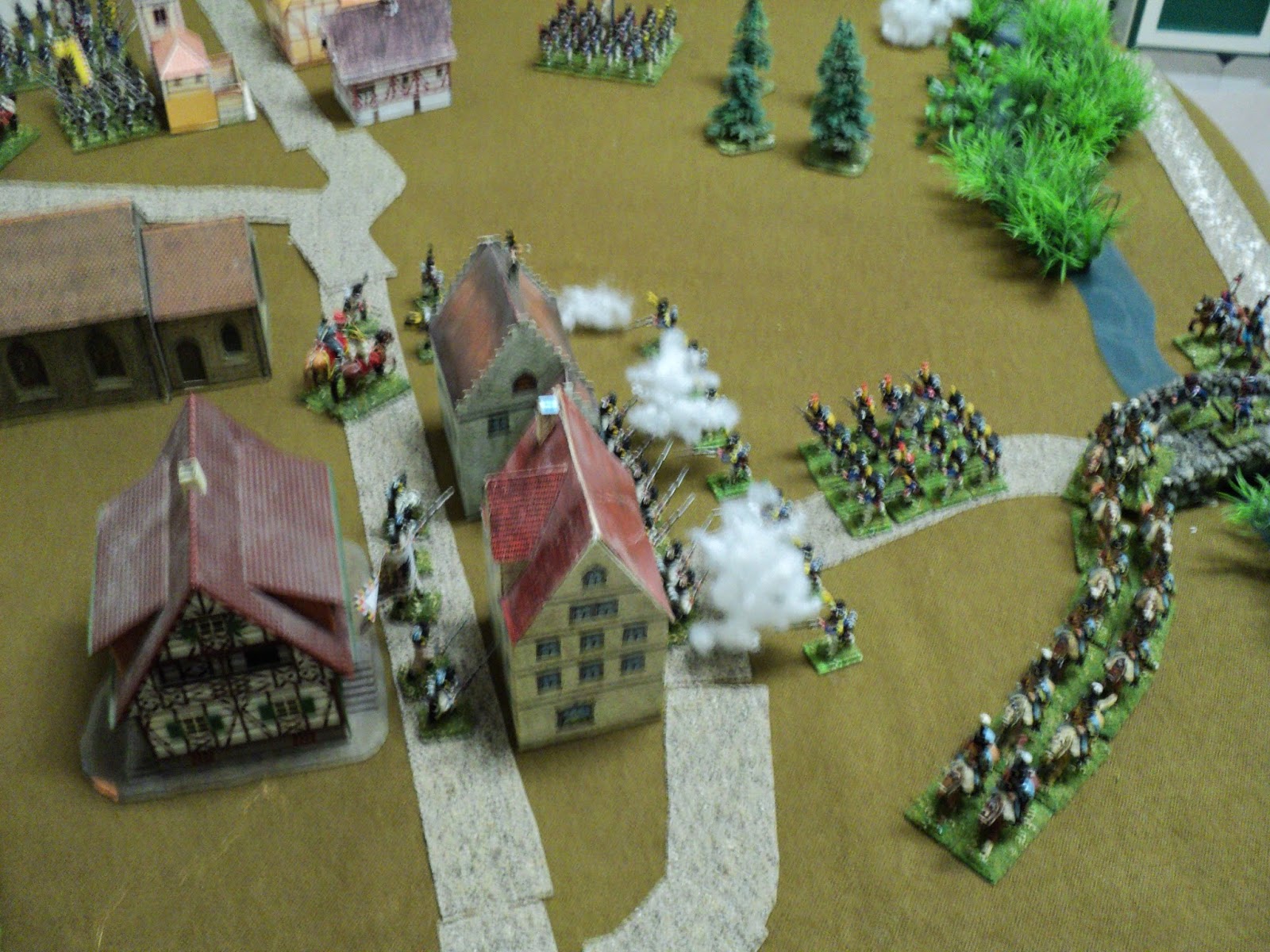 The Austrians were meanwhile pressing home their own attack against Dupont's Division.  Not wishing to engage the square too closely, the Austrian cavalry stood off whilst the fusilier column closed in, first to musketry range, then to closer quarters. 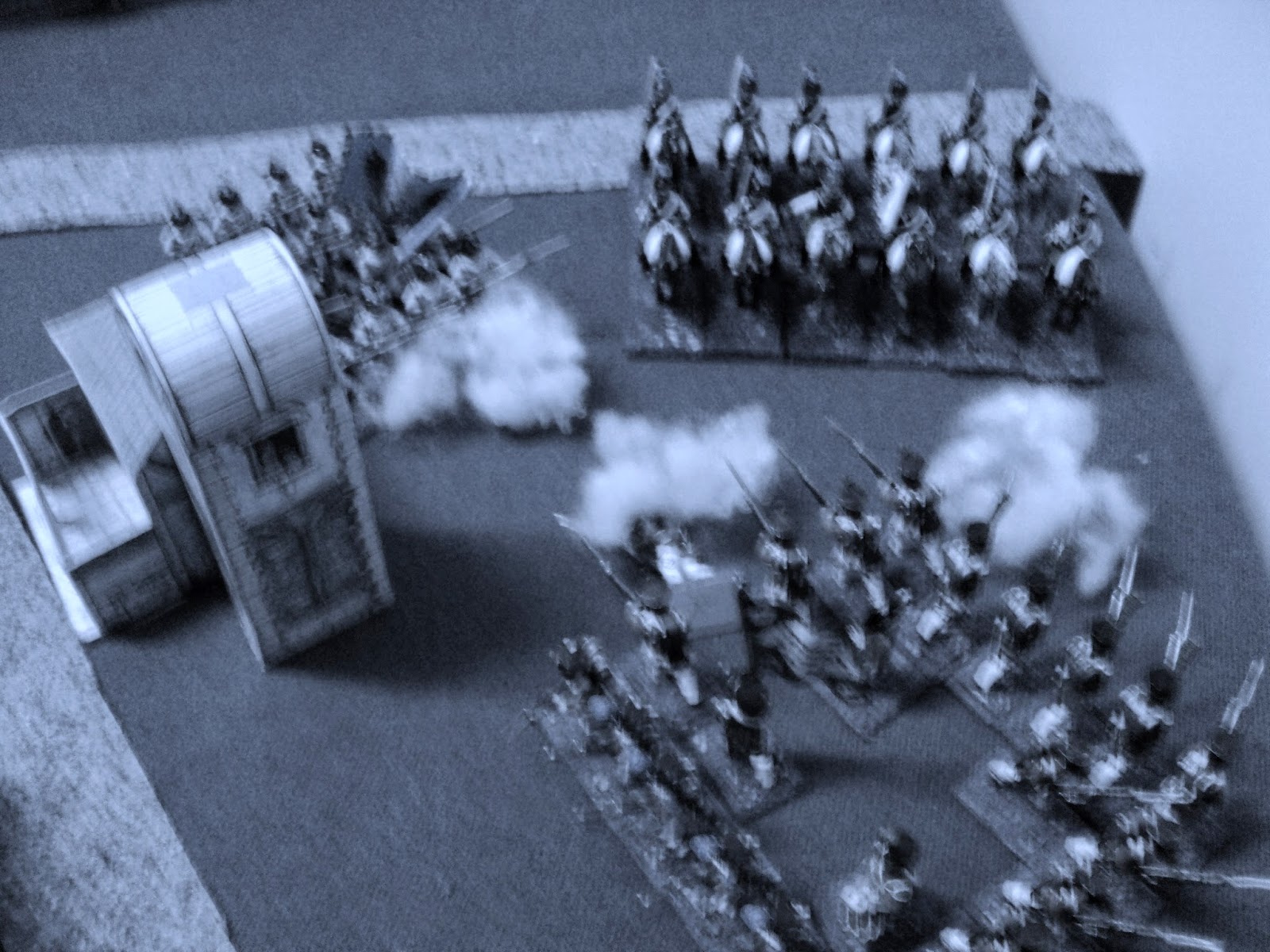 Although inflicting some loss upon the fusiliers, Dupont got much the worse of the fight - square not the ideal formation with which to meet a column - and failing its morale at its defeat, broke in rout. 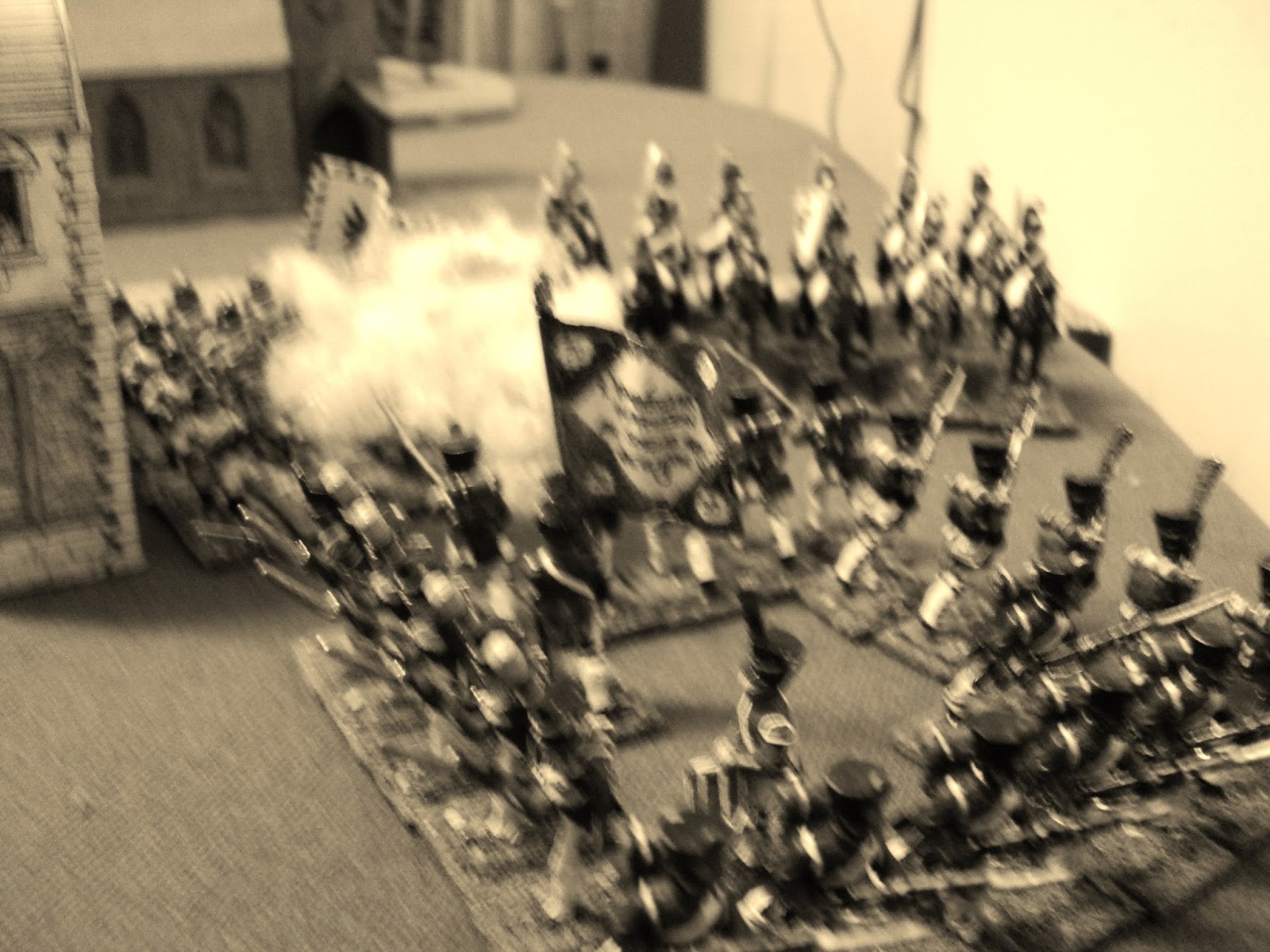 The advent of Mahler's Division forced the Austrian artillery to divert its attention thereto, but with no better effect than before (really, this must be looked into!). 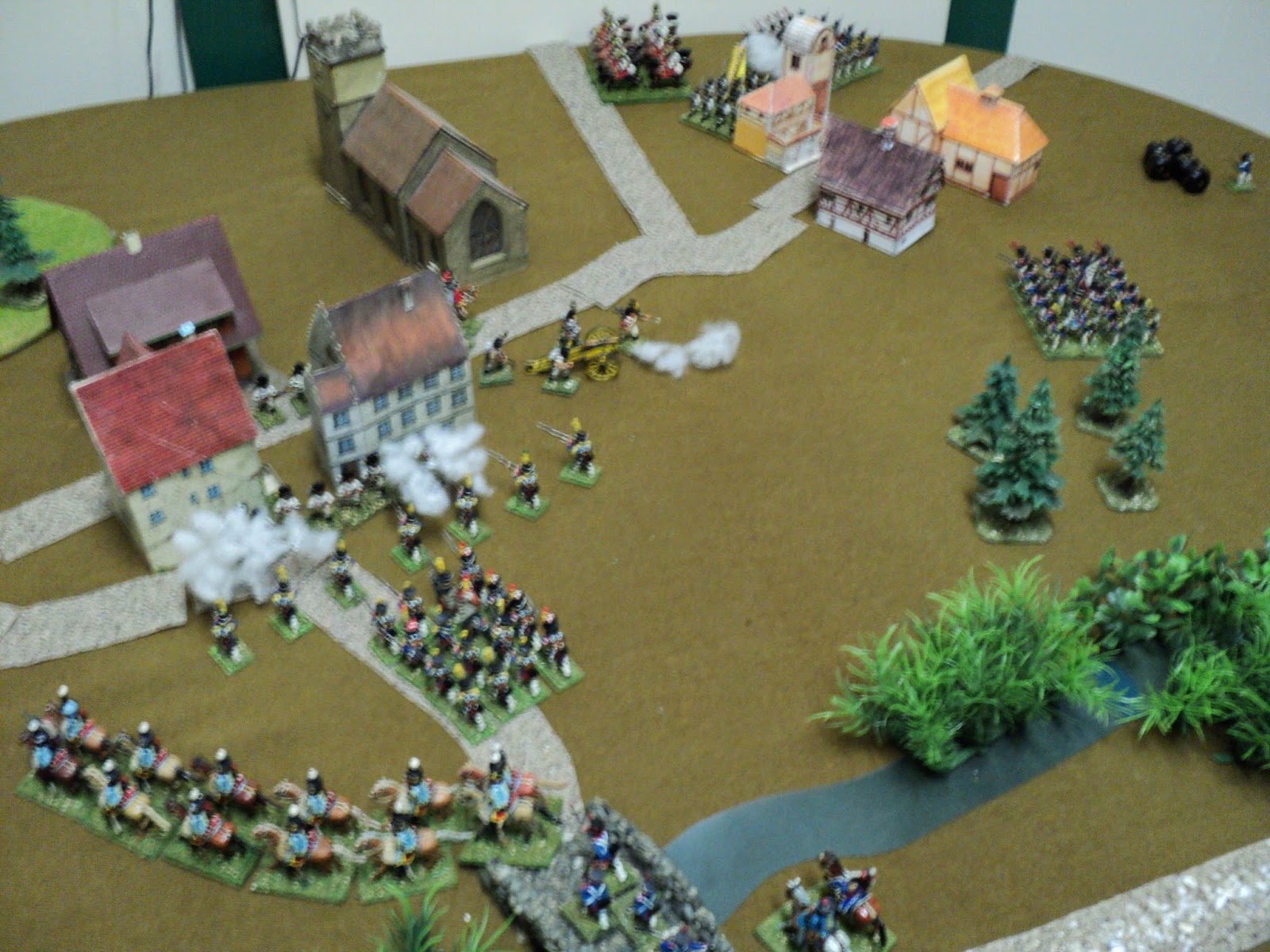 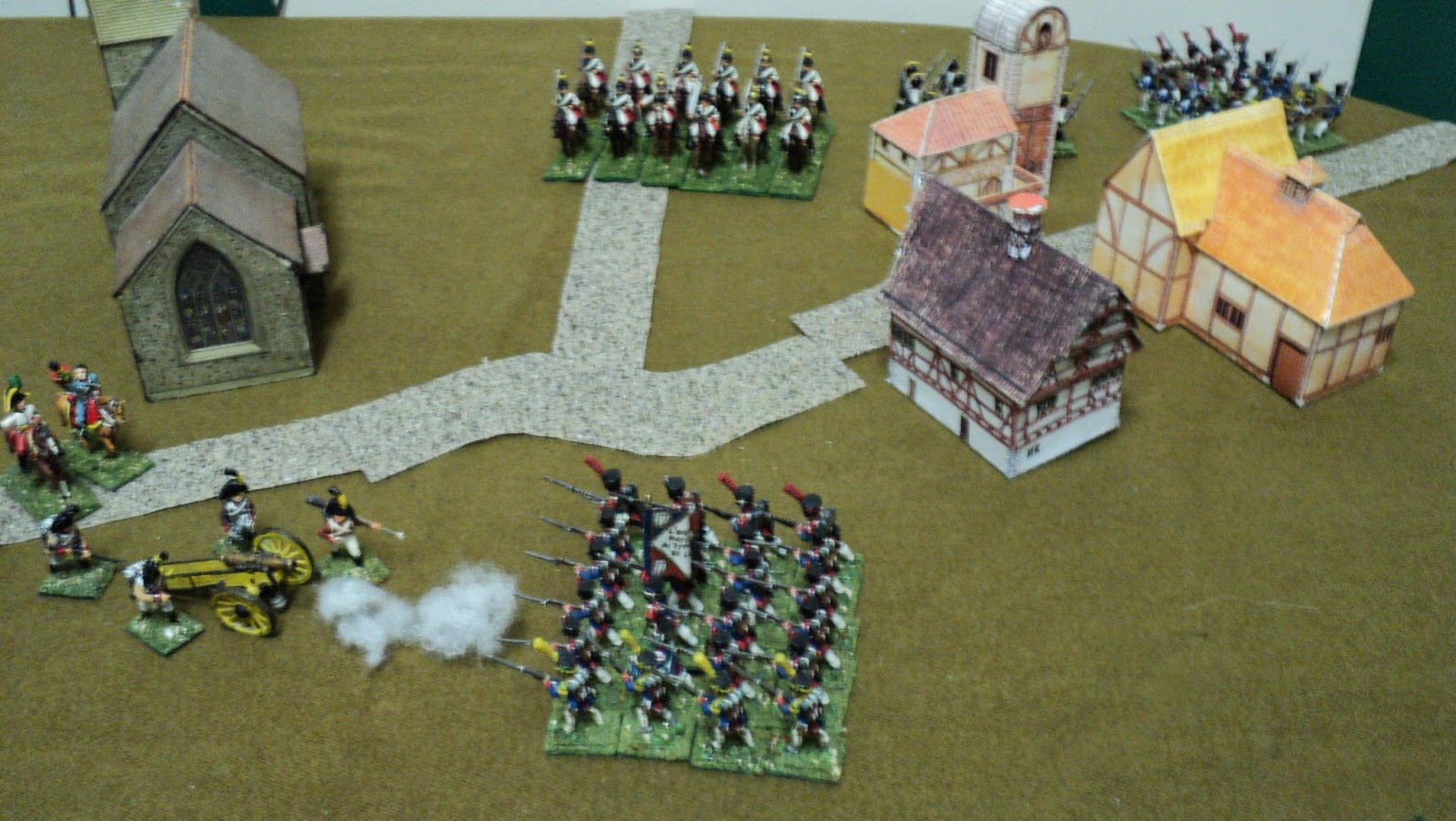 It was not until Mahler's Division got to within musketry range that the Austrian guns had any effect, but by then the Cuirassiers had broken off their engagement with Dupont's Division (leaving the fusiliers to complete their victory) and were coming down upon Mahler's flank.


By now Loison's Division was closely engaged with the grenadiers' second line, taking a number casualties the while, but hurting the grenadiers rather more.  Within a short space of time, the defenders were driven out of the town... 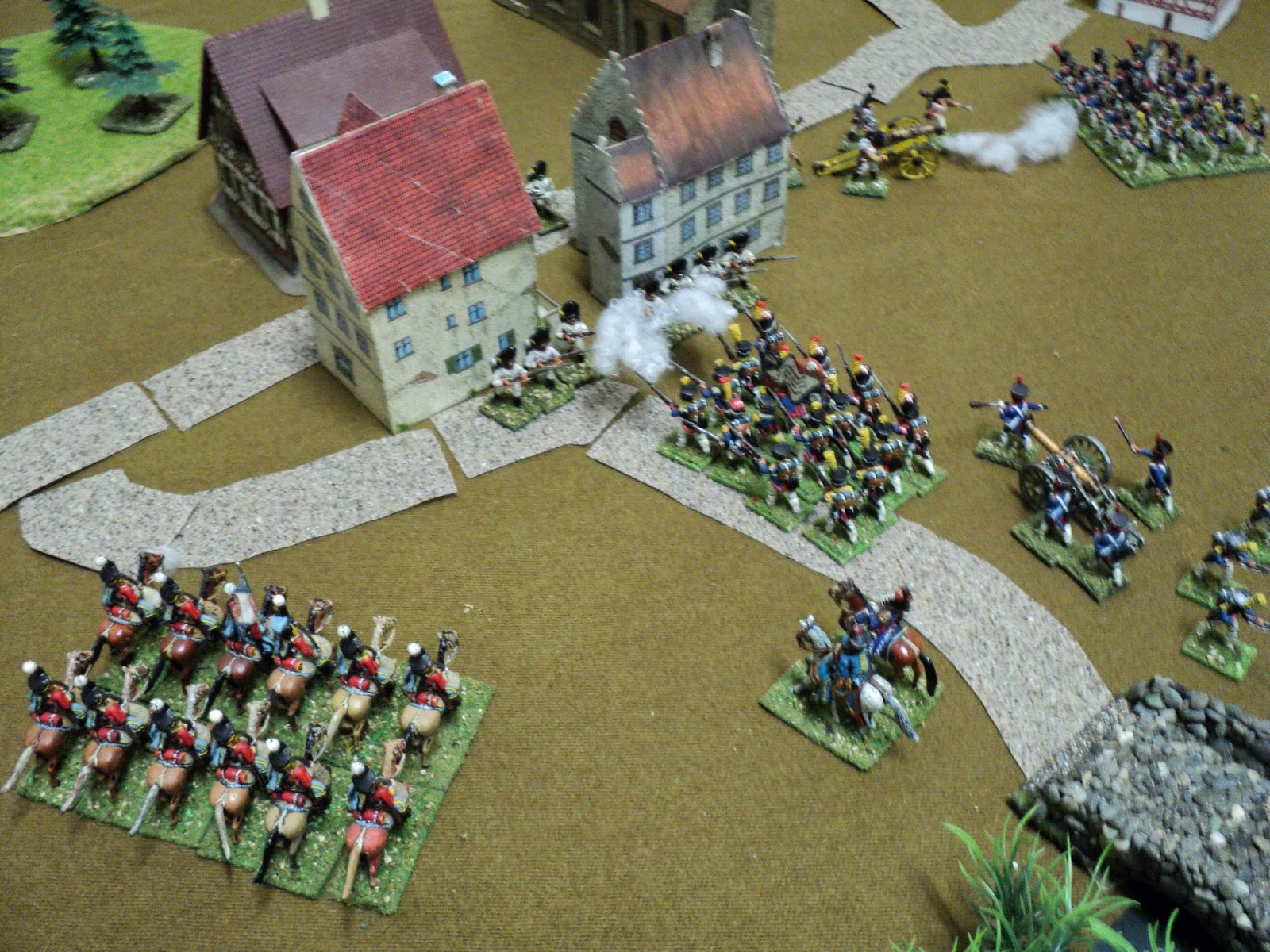 ...  where the light cavalry completed their discomfiture. 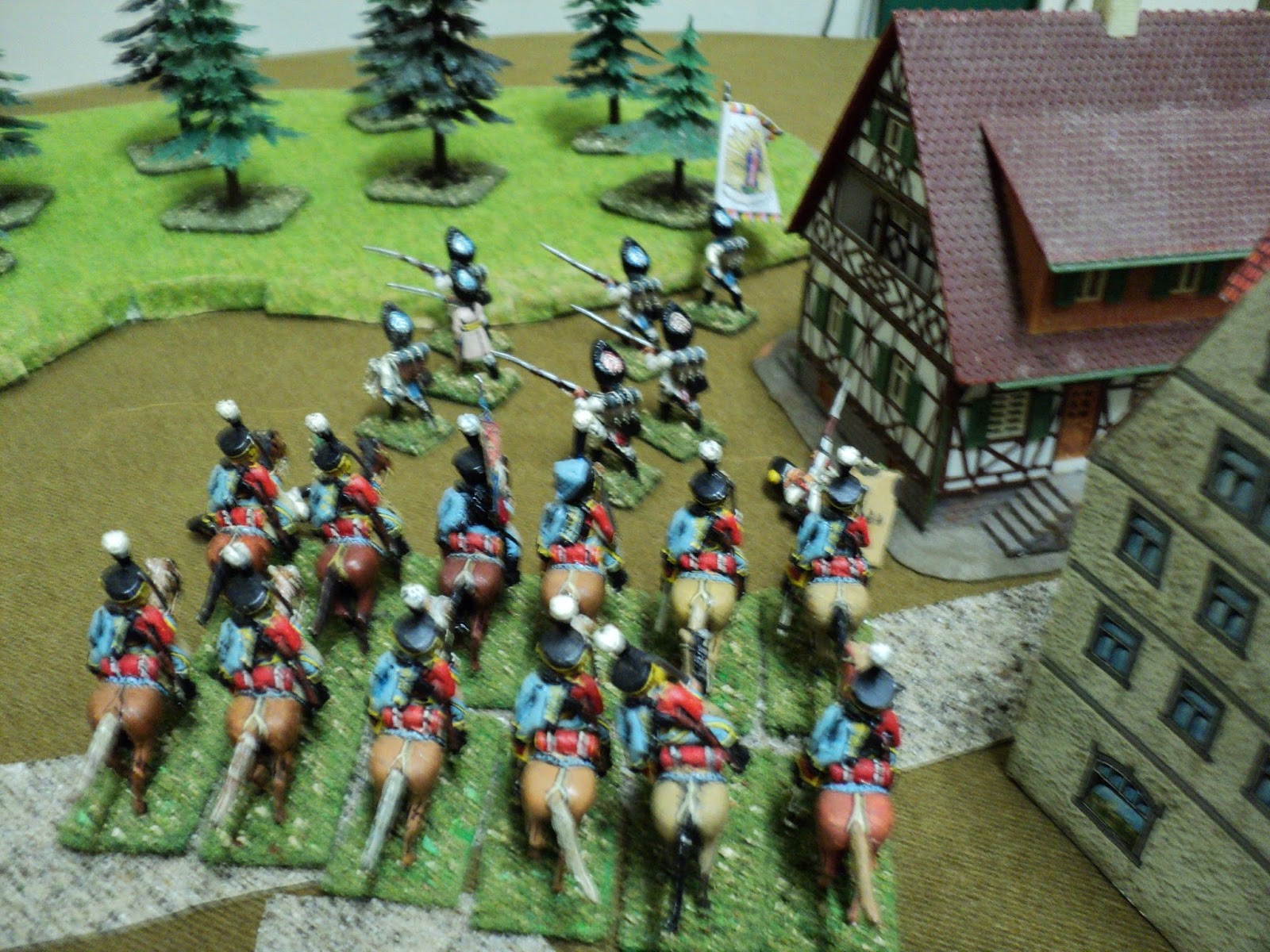 The Austrian left driven away, Loison and the cavalry turned towards the centre, where Mahler was in the midst of his own battle.  Brought across the river betimes, the Corps artillery dropped into action in support of Mahler. 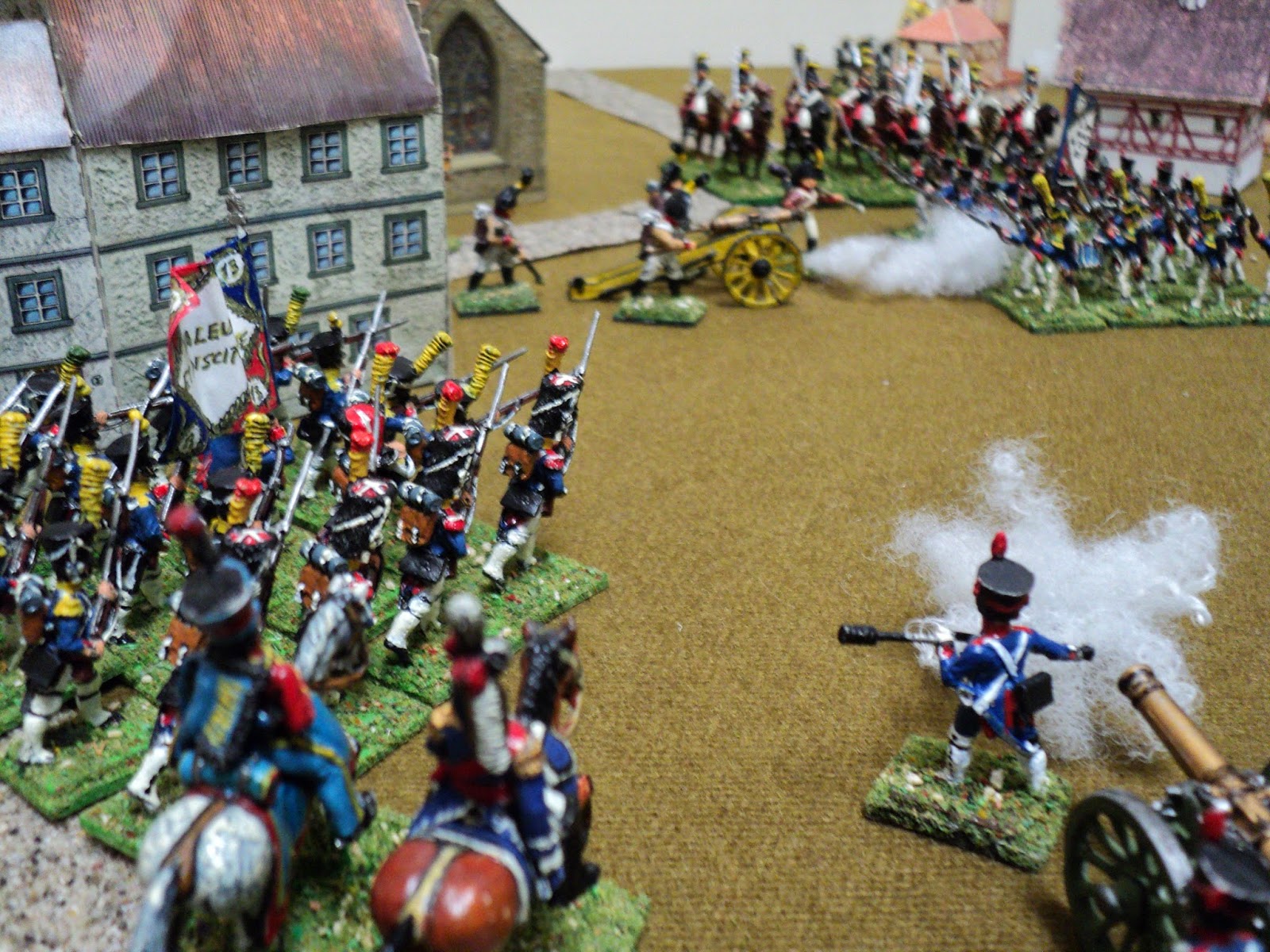 It was a case of honours shared on this part of the field.  The close quarter musketry, with artillery support, knocked over so many gunners (2 out of 4 figures) that the battery had perforce limber up and make off. But the infantry got the worse of their encounter with the Austrian cavalry (as a wargames unit, these guys have a terrific history - an almost unblemished record) .  Losing 3 figures to 1 (at least they got one!), Mahler's Division lost the fight, and had to retire. 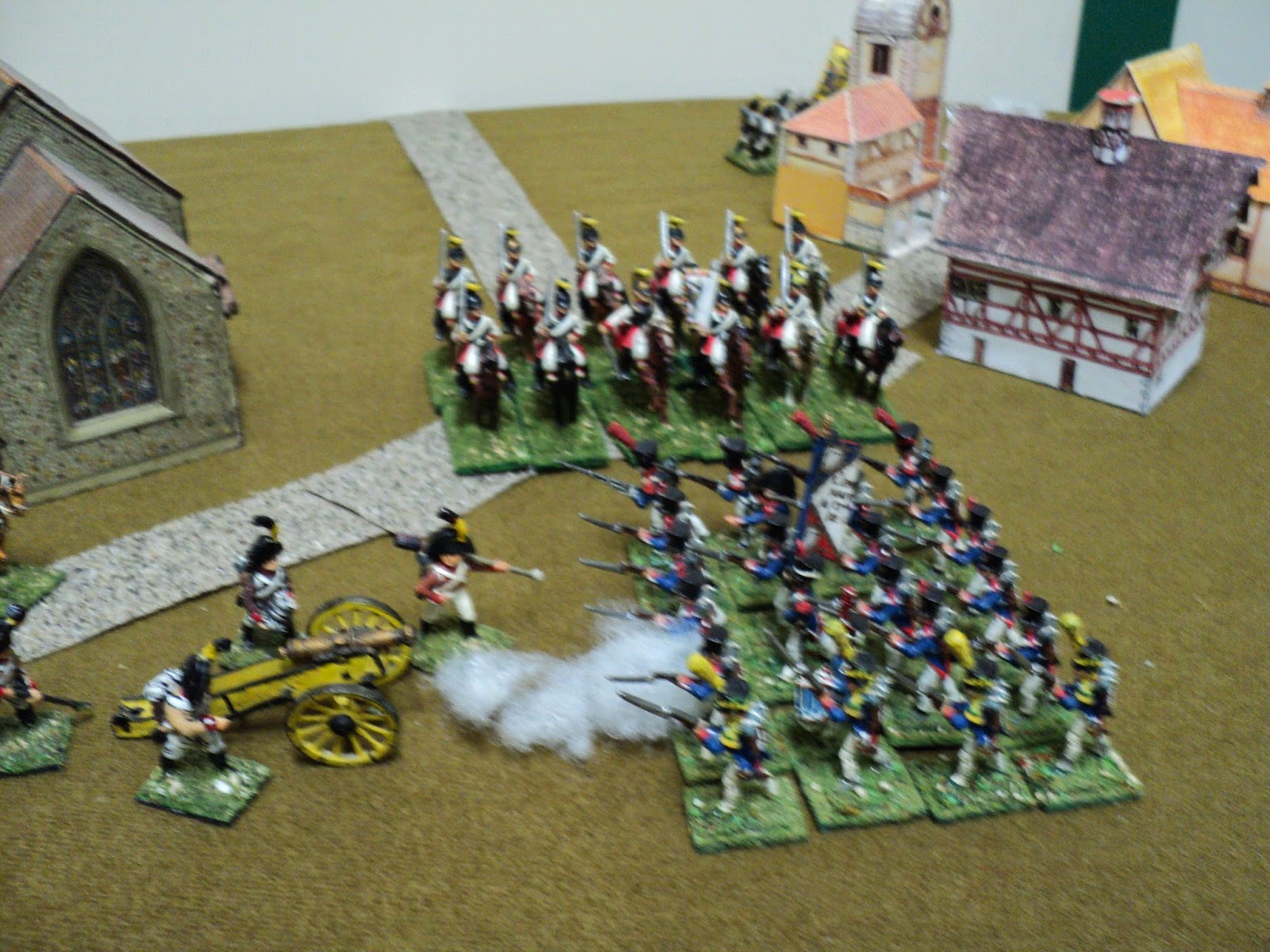 But somewhat surprisingly, their high morale (roll of 6) ensured that they fell back in good order, turning to face their enemy (I do think maybe the cavalry ought to have got more advantage for striking their opponents in the flank, though columns are possibly less vulnerable to cavalry attack than are lines, especially in the flank. Something to think about anyway). 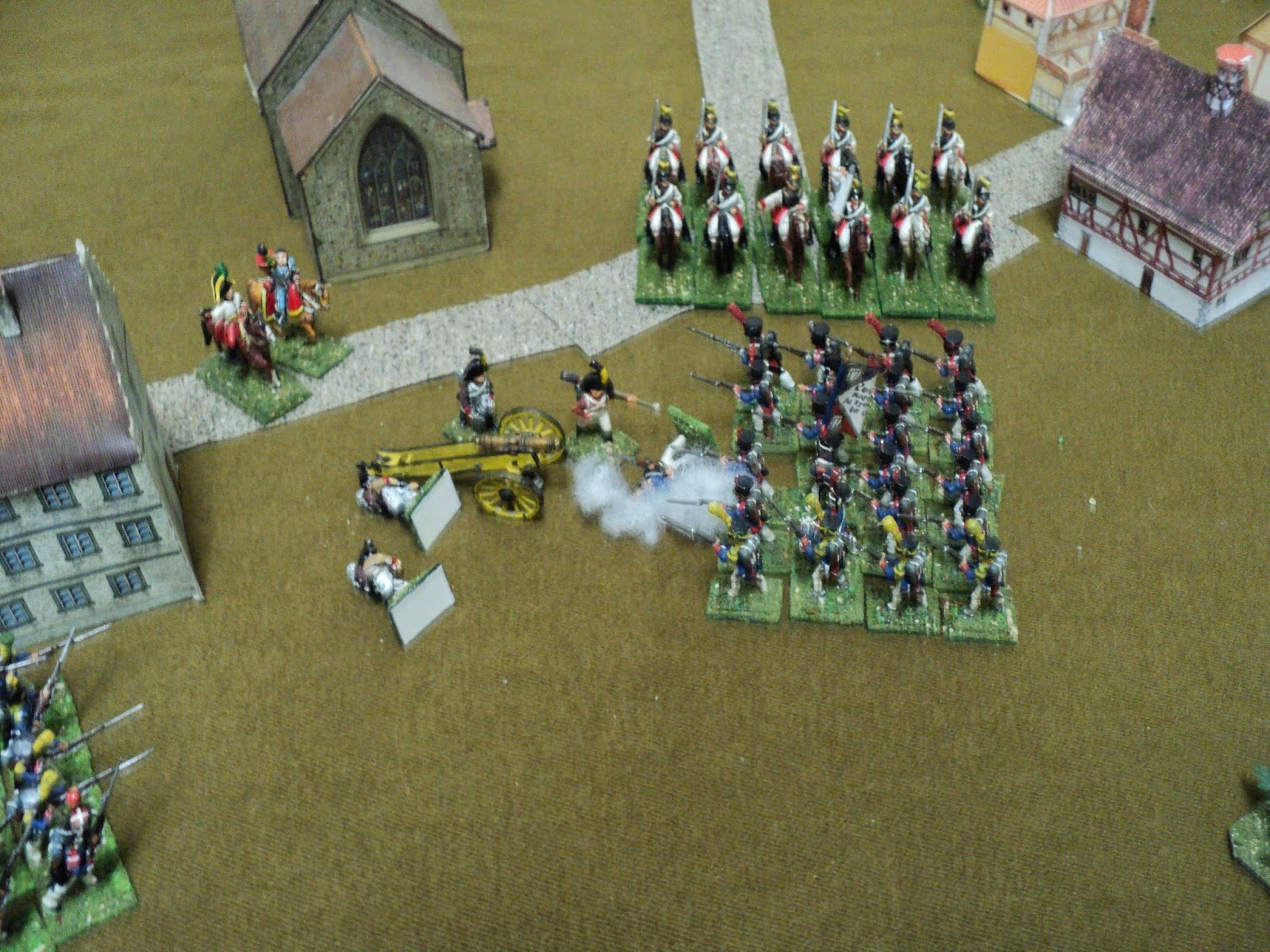 At this point, it was clear that although victorious on their left, and having fought the French to a standstill in the centre, this action was already lost to the Austrians.  Mahler's division was far from broken; Loison was still full of fight, and the French light horse was barrelling through Elchingen town onto the Cuirassiers' flank (A column of march/ passage of a defile formation is not usually in war games permitted to enter into a close quarter fight.  But apart from wondering how else one expects to force a defended defile [Remember Lodi Bridge?], it seems to be an ideal formation with which to strike into the flank of an enemy line). 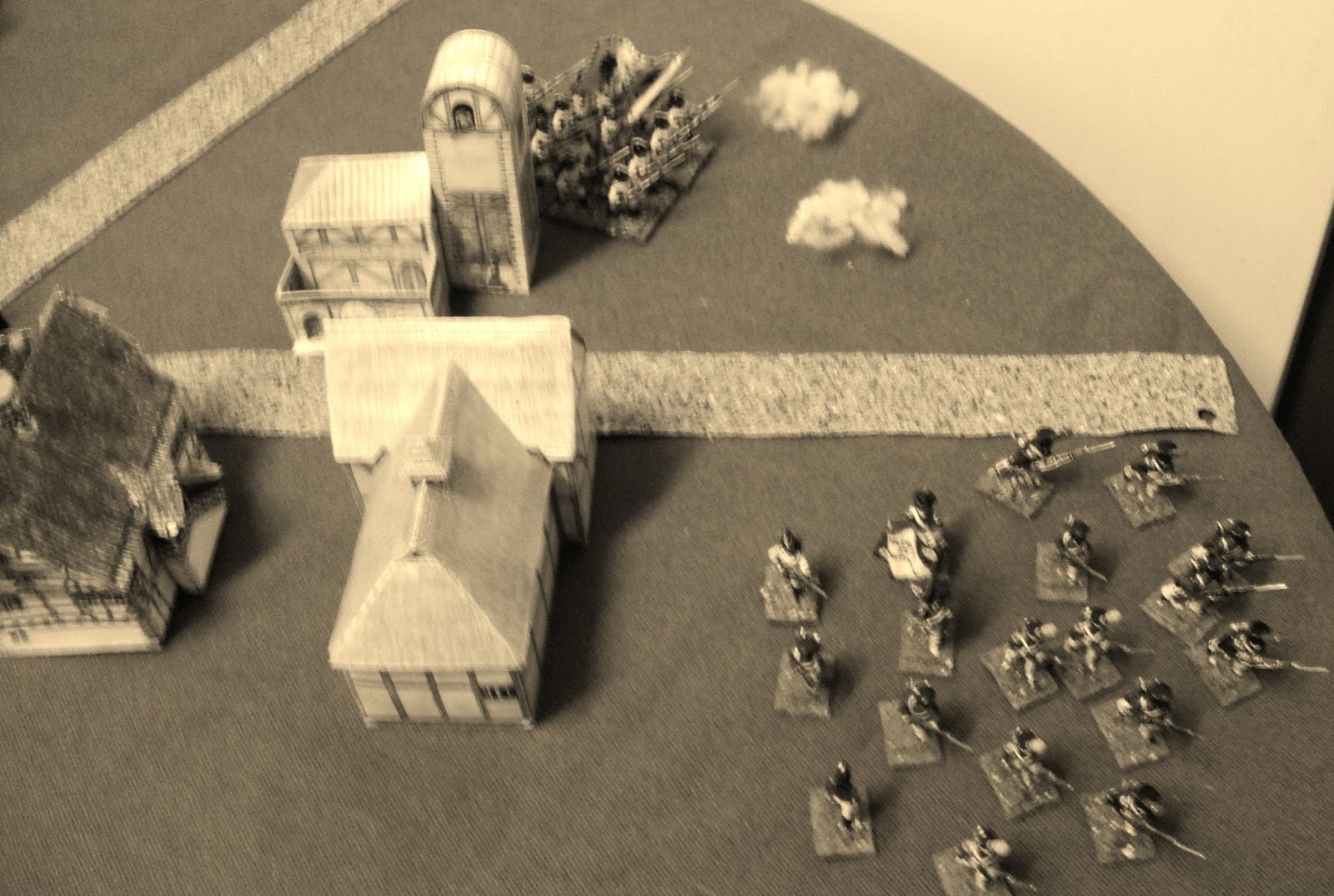 By the same token, there was little the French could do to interfere with the Austrian withdrawal, and so here the action ended. 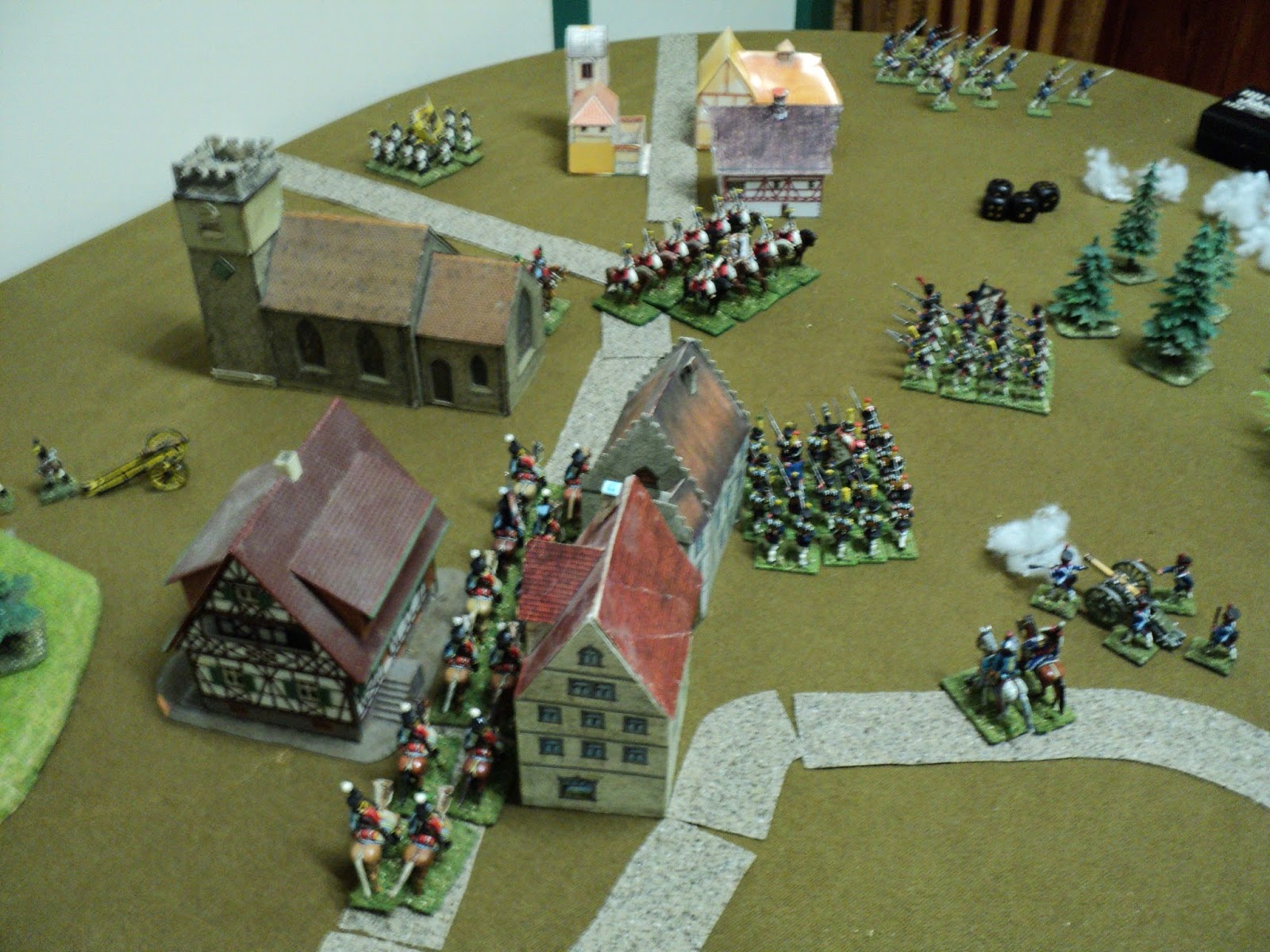 Altogether, although several issues came up in this action concerning mainly the combat mechanics, on the whole this seemed a fairly satisfactory 'first pass' play test.   The losses seemed pretty realistic, too: the French losing 15 figures all up (Dupont lost 7 of those, the other two Divisions 4 apiece), and the Austrians 14 (I think the Grenadiers lost 9 of them, being pretty much destroyed as a fighting unit).  Taken as percentages, that takes 17% from the French and 28% off the Austrians - pretty reasonable for a hard-fought, smallish action.

Posted by Archduke Piccolo at 5:27 AM