'Measuring' shooting ranges on a gridded board. 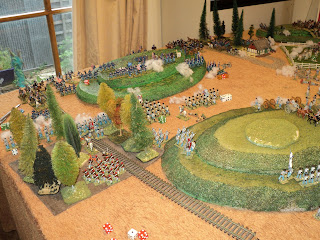 This posting interrupts my Stonewall in the Valley narrative momentarily, to report on something I have been thinking about off and on.  That narrative will continue: the posting has some of the pictures. I have found more to add, and then there is the text to write up
.

In the meantime, I have been reading a fairish bit, off and on, about the merits and problems associated with gridded war games playing surfaces.  The problem with square fields is geometric. Chess players will have encountered this, especially in end games in which Kings are playing a prominent role.  A White pawn at 'a3', scampering to promote to queen at 'a8', will get run down by a King at 'f3'.  In the 'long' Algebraic notation:

The distance from a1-a8 (orthogonal) is effectively the same as from h1-a8 - along the long light-square diagonal.  For war games, that simply won't do.  But how to Solve that geometric anomaly? Short answer: hexes or offset squares.  But they have their own idiosyncrasies, to do with the number of available directions from a given point, to wit: six.  I would much prefer that there be eight!

One method I have thought quite a bit about is to measure the distance from the centre of the object square to the centre of the target square and round to the nearest whole number.  The 8x8 'table below does that.  Take the chessboard convention and regard the bottom left hand corner (where the 'Firing Unit' is) as 'a1', to top LH corner as 'a8' and the bottom RH corner as 'h1' we see that the distance between diagonally opposite corners is a little under 50% longer than orthogonally opposite corners.

Not only can this grid quickly determine firing ranges, it could be used for movement allocation as well.  If such moves involve passage through delaying terrain, you simply count off the delay and carry on to the destination square.

I have considered allocation movement allowances along the lines of 2 'movement points' orthogonally, and 3 'MPs' diagonally, and to treat ranges in the same way.  Such a system is still a trifle generous concerning diagonals, but is a big improvement on the 'chessboard' convention.

Doubling up on movement allowances is no real hardship.  Likely enough the odd numbers that appear on this grid won't have any significance as is, but it does allow for some very fine tuning! Not only small differences in vehicular speed, say, but one might allow a single MP delay for negotiating minor inconveniences of feature - moving up an easy slope, say, or slightly rough going. Heavier penalties on movement might be enacted for difficult going.


The grids I have included here are good for an 8x8 grid.  Just recently I gridded up a piece of 5-ply flooring board into 10x10 4-inch squares.  I was inclined to keep the house-like pentagonal shape and added a further dozen squares on the 'gable'.  Normally unused, I can see the odd scenario in which they might add a little something.  As the board width is about 42 inches, I gave a little extra depth along each side square.  These can still count as normal squares, but could equally well represent reserve zones in some games.


As I have been reading a friend's copy of Neil Thomas's One Hour Wargames book, I am working out ways to translate his ideas onto this gridded set up.  I might be forced to extend my 'Ready Reckoners' to a 10x10 grid...

Posted by Archduke Piccolo at 5:20 PM