Stonewall in the Valley 10: Battle of Passage Creek concluded/

The arrival of the three Confederates Brigades of Taliaferro, Trimble and Taylor on the left and centre of the field tended rather to shunt Winder's 'Stonewall' Brigade off to the right, facing Barnett's barn and the nearby woods and hill.  Fortunately, Munford's 2nd Virginia Cavalry, accompanied by Captain Chew's 'flying' artillery joined them there (this determined by dice rolls).  Whilst Chew's rifled guns engaged the Union horse and artillery on the hill, 27th Virginia Infantry rallied and rejoined the rest of the Brigade, and Munford's cavalry dismounted, formed a skirmish line, and plunged into the woods behind Turvey's place (just visible in the above picture).  Although Ashby's cavalry had arrived in the centre, Jackson directed them to support General Winder.
...

Meanwhile, on the rest of the embattled front, events seemed to be turning in favour of the Union.  Both sides seemed to be wilting under the deadly fire, to the extent that on both, the morale and endurance of five regiments came into question.  For all ten units, a dice roll would determine how they would respond to events. The Union rolls, north to south went: 3,3,4,5,2. The last was a failure, but only enough to stop that unit advancing as it had been doing.


The Confederate rolls were much less fortunate.  Again north to south, they went 4, 1, 1, 2, 1 - disaster!  In the woods on the extreme left, 23rd Virginia stood up to the strain well enough, but 37th Virginia, and almost the whole of Trimble's Brigade, were driven back.  The advance of 21st North Carolina was halted, but 21st Georgia fell back, and 15th Alabama, whose enthusiasm in closely engaging the enemy more than made up for their early morning failure, once more suddenly broke apart and fled in confusion.


Having shaken themselves out into a semblance of order, the Stonewall Brigade resumed its advance, 27th Virginia into Barnett's field, whilst 5th Virginia engaged the Union battery on the hill to the right. Coming under return gunfire, 5th Virginia were taking heavy losses - in fact little more than 50% of the men remained with the colours at the close of the action.  Yet that gallant regiment stood its ground and returned a musketry so effective as eventually to silence the battery altogether.

The Union horse alongside the battery never really got the chance to redress matters.  A popping fire of carbines from the woods to the left front revealed the presence of dismounted rebel cavalrymen; 33rd Virginia, alongside Chew's battery, supported the 5th from its right rear, and a large body of horsemen, distant as yet, were rapidly approaching from the right front.  In the face of such a variety of threats, a kind of paralysis seized the Union cavalry. 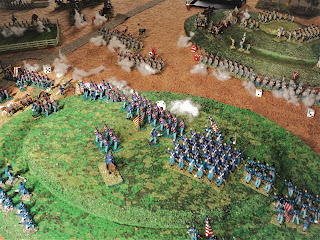 In fact at about this time, I considered calling the battle, as it was already clear to me that the decisive action was going to happen on the Confederate right.  But Union successes so far mitigated against such a decision.  I felt that General Shields would see the battle going pretty well, and would stay with it. 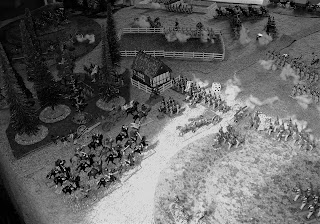 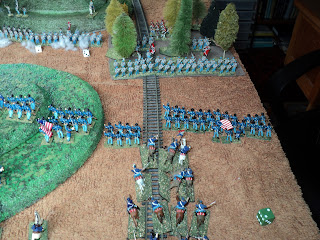 It would be a costly decision.  Though their first attacks had been checked, if not altogether repulsed, the Confederates had plenty of reserves.  The 6th and 7th Louisiana of Taylor's Brigade soon took up the cudgels dropped by Trimble's Brigade.  Having recovered its aplomb, 10th Virginia also rejoined the 23rd in the railroad woods, where their combined firepower gradually overcame that of 5th Ohio. 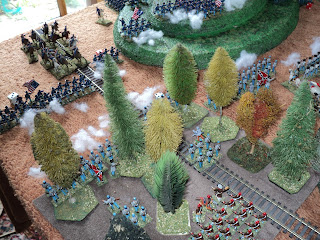 In the midst of the roar of battle, as he stood on horseback closely observing the action, General Shields was struck by a Minie ball that flung him out of the saddle.  The wound was mortal (determined by die roll, ranging from '1' - slight, requiring dressing but able to remain in command - to '6' - immediately fatal; I rolled a '5').  As Shields was carried from the field, Brigadier Kimball took over direction of the battle. 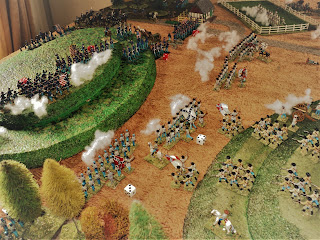 (In my combat system, dice rolls for firing determine the number of 'hits' on the target, which are then resolved into 'casualties' (dead, wounded, missing, straggled, skedaddled, and carrying wounded to the rear, and what have you).  In resolving hits into casualties, if double-6s appear, regimental officers are laid low, which can affect the unit's cohesion in subsequent 'reaction' tests.  But triple-6s affect any General officer who happens to be standing within 5cm of the target unit.  So it happened here.) 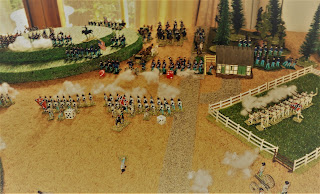 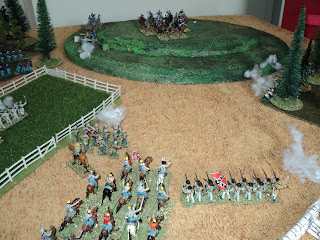 It was not long before 23rd Virginia felt itself sufficiently emboldened to emerge from the woods to engage 5th Ohio more closely.  The 10th had rejoined the firefight, and the 5th Ohio, in front of them was feeling the heat.

In the centre the firefight continued - a real battle of attrition, though for neither commander was this a desirable proceeding. General Jackson in particular had to be acutely aware that somewhere less than a week's march distant, General Fremont's Mountain Department Army was at large and unchecked. It would not do to be forced out of the Shenandoah valley because the last couple of days had so weakened his army it could not face Fremont's column.


Developments on the southern wing were more to the liking of 'Old Blue Light' Jackson.  As the Stonewall Brigade began pressing, Ashby's cavalry (7th Virginia) nerved themselves to charge the 1st Rhode Island on the hill.  Under cover of the charge, Col. Munford's dismounted troopers emerged from the woods and began to climb the slopes flanking the Union horse.


Although the Federals had the slope of the Confederates, the latter had the numbers.  As it happened, the latter exacted a full revenge for its misfortunes earlier in the day and routed the Rhode Islanders right off the hill.  Sorely depleted, the survivors of Battery L, 1st Ohio Artillery also made off.

This left a vacuum on the Union right flank, guarded only by the woods back of Barnett's barn, where 7th West Virginia was conducting a lone fight against 5th and 27th Virginia.  Within the cover of the woods, the West Virginians were able for over an hour to hold their own despite the slight numerical superiority of their opponents.  The hill once cleared brought in 33rd Virginia and the dismounted troopers of 2nd Virginia Cavalry over and around the heights onto the West Virginians' left flank.


The writing on the wall must have been abundantly clear to General Kimball by now.  The early successes on his right and centre were beginning to become undone, as rebel reserves joined in the fight, and their fire began to be felt.  True, the Union had reserves also, but as holes began to appear in their turn in the Union lines, they were soon used up.
It did not help the Union cause that Brigadier Trimble had reorganised his Brigade fairly quickly after his earlier reverses.  To be sure, the North Carolinians and Georgians had never lost their good order despite being driven back.  For their part, 15th Alabama pulled itself together a deal more rapidly than it had earlier in the day.  In sum, therefore, Trimble's Brigade was ready one more to try conclusions.

The crumbling Union line no longer had that luxury.  As losses mounted, cohesion became more difficult to maintain.  Tyler's, and then Kimball's, Brigades began to be edged back as the Confederates stepped up the pressure. Suddenly the 5th Ohio infantry broke and scattered, signalling an imminent collapse of the Union right.  In desperation 1st Maine Cavalry - part of Col Knipe's column that had remained on this wing to support Tyler - flung themselves upon the Confederate line.

Although with pistol and sabre they lowered a few rebel infantry, the latter had emptied too many saddles during the charge itself, for the Union horsemen to hope to impose more than a brief delay.  The survivors joined the growing exodus from the field.


That general retreat spread to the centre as General Kimball acknowledged that the game was up, and it was time to preserve what he could of his command.  Hoping to catch the Confederates on the hop, he flung in the West Virginia cavalry against the line of Confederate artillery astride the ride near Barnett's field.  Had the Napoleon battery not had taken earlier losses the execution by the CSA guns would have been catastrophic (the horse would have taken eleven hits) but as the battery was down to 3 crew figures, the 'Die Range' was only 5, to the roll of '6' was a 'miss'.  The '5' rolled by the companion battery was within the  'Die Range' for rifled guns firing canister at point blank range. That was bad enough for the cavalry, who didn't even close, but made off hurriedly down the road.
The afternoon was now far advanced, perhaps two hours of daylight remained as Shields's - now Kimball's - command quit the field.  Losses had been heavy on both sides, but, as the battle progressed, the fortunes though favourable to the Union to begin with, had swung decisively and irreversibly in favour of the Confederacy.

There was no pursuit.  The Army of the Shenandoah had had a hard twenty-four hours, and in the process had thrown back two of the Union columns sent to drive them from the Valley.  It was enough that the rebels could reach the southern turnoff and restore their lines of communication.  For their part, the Federals would not reach Front Royal until the following morning.  Nor would they stop there.  Desiring to return to his parent Division, Col Knipe drew his command back to Cedarville.  For his part, perhaps shaken by the day's events, and the loss of General Shields, on the morrow Kimball took his Division back to the Blue Ridge Mountains, though the Manassas Gap and stopped only upon reaching Piedmont town late in the afternoon.

Of the movements of the Army of the Shenandoah, we'll have to wait for the next instalment of Stonewall in the Valley.

Posted by Archduke Piccolo at 9:00 PM

Email ThisBlogThis!Share to TwitterShare to FacebookShare to Pinterest
Labels: ACW, Campaigns, Stonewall in the Valley, The War Between the States