Battles with Byzantines and Bulgars.

Over the last couple of days, I've been trying out the Portable Wargame 'Ancients' rules for my Byzantine and Bulgar armies.  As suggested by a reader, I used the Memoir '44 game board, with a few added features by way of a battlefield.  This board comprises a hex-array of 13x9 grid areas - 117 in all. The Portable Wargame suggests an appropriate army size for a given game board is a number of units not more than as many plus half the number of grid areas along the base line. That suggests 19 or 20 units maximum. I have been working on armies of 50SP (Strength Points) which easily fits within this maximum.


In my previous posting, I suggested the troop types that might make up an army, but made no concrete recommendation on numbers. What follows is my suggestion as to selection. In the following I have NOT taken into account the suggestion in Developing the Portable Wargame of adding and subtracting 1SP to or from  the standard SP for ELITE or POOR quality units. That is an option I prefer to leave open.  As they are easiest, I'll lead off with the Bulgars:

Adding up the minima of each type gives 8 units at 29SP (includes the Commander); The maxima to 24 units and 76SP.  I had 1 more unit for each of the minima, but as that came to 40SP, it seemed to me unreasonable to be so prescriptive if one were choosing a 40SP army.

Otherwise, I am basing these lists roughly on the Army lists for WRG's DBM rule set.  If the Bulgar army is fairly simple to draw up, the Byzantine is a deal more complicated.  Some compromises have to be called for.

1. I have not included artillery or fire syphoners in this list.
2.Mounted on heavy wagons, artillery should be able to move, though probably not move and shoot in a single move.  They would have an SP = 2. Up to 1 such unit may be included in a Byzantine army.
3. Fire syphoners were light infantry with flame throwers.  If you must have any, then there should be not more than one such unit.  Such a unit would have SP=2, and have a range of 2, requiring 5 or 6 to hit.  Enemy units in an adjacent grid area take -1 from their D6 die roll for all combat.  For reasons that might not at first seem apparent, I would rate such a unit POOR - more a reflection of the risks involved, than any reflection on the courage or quality of the personnel.
4.  There has been some suggestion that Byzantine peltastoi of the late 10th and 11th centuries were not only less heavily armoured than skoutatoi, but that their role might have been more in the way of light-medium liaison between heavy and light foot, and able to operate in difficult country.  I have my doubts, but if you accept this, then you could allow a 3SP unit to move 3 grid spaces instead of the heavy infantry standard of 2.  It's shooting range (javelins) would be two grid spaces.

Adding up the minima gives 8 units and, including the Commander, 30SP - 29 if you take a 3SP peltastos unit in lieu of one of the skoutatoi.

Rather than give a blow-by-blow account of my play tests so far I'll just post pictures with light commentary. Both games were fun, but were not really suitable for such after action reports, being very much trial runs.

The first action was a straight out solo game, all units activated in any given turn. Nothing sophisticated: just line 'em up and get tore in. A few interesting points emerged. Moving first put the Bulgars at something of a disadvantage, as it was the Byzantines who were able to get in the first kicks. Not that they did much damage - appalling shooting; appalling close combat skills.

All the same, as the action went on, the Byzantine advantage of lance-armed cavalry did become noticeable over time. My suggestion in a previous posting of giving the Bulgar horse a shooting advantage I have not adopted. The sole motivation for it at all was to balance the two armies, and it seems to me artificial and unconvincing.

As the battle wore on, losses were spread right across the board, and mostly on the Bulgar side. I was taken by surprise when a count revealed that the Bulgar Army had reached its exhaustion point at least two turns before. When just the second unit was destroyed - both lost being light - I checked the SP lost and reached 18!  Sixteen should have been the exhaustion point. 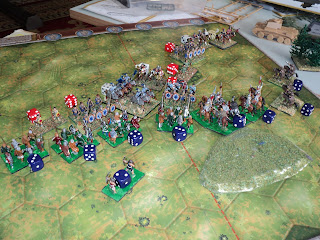 Played in this way, the action did look like a battle, with actual battle lines. There was plenty of to and fro action as well. 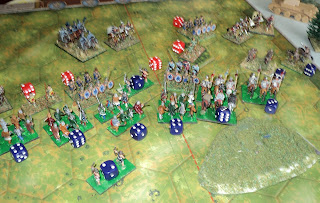 In some respects the Bulgars had the worse of the luck, more of the hits resulting in Strength Point damage than the Byzantines received. Having units that are just as happy shooting as getting up close and personal gives them good incentive to retreat rather than take a loss. In this first action, I seem to recall the kataphraktoi making at least three charges. They didn't lose a single SP all day, though were driven back more than once. 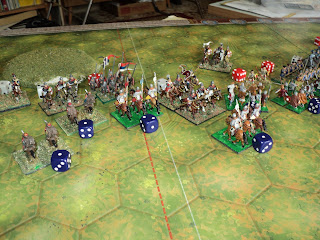 It may have something to do with a quality of Ancient's armies, especially if they involve cavalry, is that when one of them reaches its exhaustion point, what then happens? They are unable to counter-attack, as aggressive moves are no longer permitted.  And yet, one feels there ought to be a place for a reserve body of cavalry capable of mounting a charge to discourage pursuit whilst the exhausted main body flees in headlong rout draws off . This might be limited to fresh (undamaged) mounted units, or maybe one unit accompanied by the Army Commander. At any rate, I called the battle when the Bulgars had reached their exhaustion point. The Byzantine loss had been comparatively trifling (8 or 9 SP as I recall). 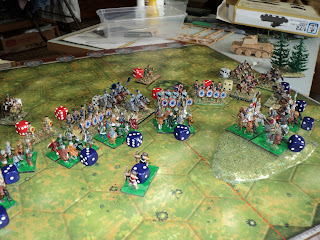 That was just to try out the combat systems. For the second game, with the same 46SP armies, I brought in the playing card activation system recommended in Portable Wargames. The number of units, counting the Commander as a separate unit, are totted up and halved, with halves rounded up. The 15 Bulgar units gave them a median of 8, so the RED 7s, 8s and 9s were their portion of the activation card deck. The Byzantines had 14 units, so in went the BLACK 6s, 7s and 8s.  Finally a couple of jokers went in to signal time to reshuffle. 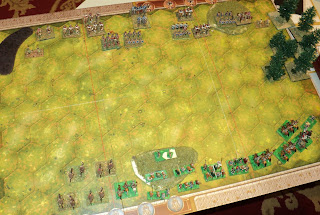 I had hoped that the Bulgars' slight edge in activation would balance Byzantine advantage in lance-armed horse. It didn't happen that way. The early draws were fairly even, the Bulgars drawing slightly higher numbers. But then the Byzantines drew a long series of Black cards, which continued after a joker was reached and I had to reshuffle the deck. 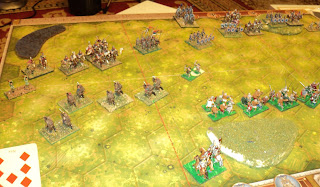 It was getting embarrassing. The Bulgars were getting no opportunity to shoot, and only indifferent Byzantine practice was keeping their units alive. I think there might be a case, here, for the DBA/DBM convention of both sides shooting, rather that the moving player's army only. Targets may not be in a grid area adjacent to a unit of one's own army. 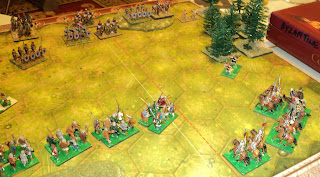 During such a string, so long had it been since I saw a red card, I felt forced to cheat in behalf of the Bulgars to discard a black card - only to draw another. That one I played, and then drew another black card! 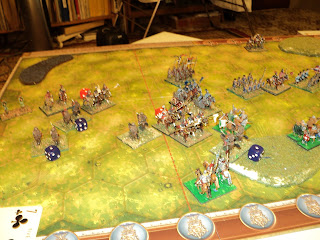 Here's a thing. The presence of the jokers means that there is no guarantee than a long string of black cards is going to be balanced by a long string of reds.  That's what happened here. In fact the string itself was interrupted by a joker, the deck reshuffled, and the black string continued. It could only happen to the Bulgars.  I have never had any other army so unlucky. Poor wights. They fight well enough. Most of the time. But always something goes disastrously wrong, and they get on the wrong end of another heavy defeat. 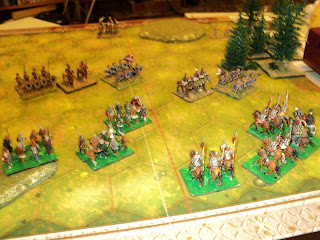 The odd thing is, that I use the same figures as Georgians.  As Georgians - or Abasgians - they have a fine record in DBM, winning far more than they have lost.  So the Bulgars were being edged back as they tried to mitigate their losses, but they could not have kept that up forever. 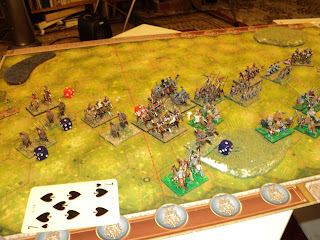 I think I might try the same card system, but keep the Black and Red decks separate, including a single joker in each. The cards are then to be drawn alternately from each deck. To determine the first turn, both sides draw, with the higher card taking the first turn. The lower card is returned to the bottom if its deck. When a joker is reached, the decks are reshuffled. After reshuffling, both sides could draw again for the next turn, with the high card taking the move. If one of the cards is a joker, it is ignored and placed at the bottom of its pile, and the other side takes the turn. If both jokers are drawn, they are removed to the bottom of their piles, and the cards redrawn. 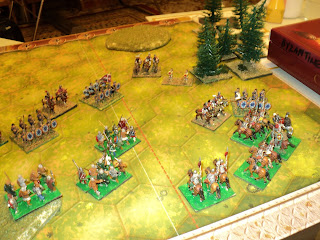 Such a system still offers a reasonable chance that it some time, one side will get two turns in succession (or even three, but I imagine such occasions would be extremely rare). More often than not both sides would be in a position to undertake something active, every other move.

Meanwhile, the final three pictures show the situation as it developed late in the action. A rare red card gave the Bulgars the opportunity to throw the Byzantines back in places, but the right wing, where fought Khavkhan Apotaglu remained under heavy pressure .

At last the Bulgar line were being driven from the field. The khavkhan's bodyguard (counted as Elite) finally broke, and Apotaglu himself slain (rolled 1xD6 for fate of the leader: a six!). The situation in the final picture shows the dire fate of the remnants of the Bulgar army.

Posted by Archduke Piccolo at 8:28 PM