As promised a while back, I have attempted an Army List of Byzantine Empire troop type classifications and characteristics for the Portable Wargame.  The 'Enemies of Byzantium' will be for a later posting. This list is derived from the period c.950-c1050AD, but, with some exceptions can be adapted for the earlier Byzantine Empire from the development of the Thematic system. You will find in the following quite a few types that don't 'fit' the classifications given in the book.

First off, quite a few of the units are 'mixed arms'. In the case of the Byzantines, units, both horse and foot, usually comprised some lance or spear/pike armed ranks, and some bow. Occasionally there would be THREE different arms in the unit, notably the kataphraktoi and, on occasions, the heavy infantry that, for the purposes of this article, I'll call skoutatoi.  For the purposes of this article I shall ignore the secondary or tertiary weapons such as swords or maces (except where the latter are carried by kataphraktoi).

General comment:
The standard Byzantine infantry at around this time comprised formations of 1000 men, divided up into:

These numbers can be represented by 4x8-figure skoutatos units, 2x2-figure javelin units and 2x2-figure slinger units. This assumes the heavy throwing weapon fellows have formed in close order the front rank of the heavy infantry. But if you want to field any, then 1x4-figure unit seems appropriate.

There were a couple of other types of infantry that might be included: 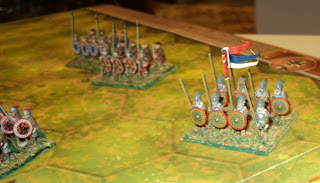 3. Light Horse - often mixed with lance and bow or javelin.

A final word on facing...
The thought occurs to me that Ancients war games in particular might 'work' better on a hex grid if, although movement was through hex-sides, unit facing should be through the corners. It seems to me that the arcs of fire would be more easily visualised, but also that the front, rank and rear of units more easily identified. Provided it is remembered that facing and movement are different, I see that this would add no complication and resolve some possible anomalies. If necessary I might enlarge upon this notion another time.

I have not play tested these types, and may revisit this particular posting with amendments should they suggest themselves.

Posted by Archduke Piccolo at 1:53 AM