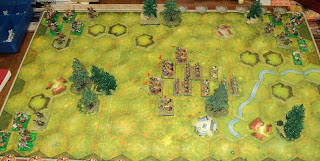 To conclude - for the time being - this series of articles on the Byzantine and Bulgars, I thought I would try a proper battle, but with a certain extra something. From the Grant and Asquith Scenarios For All Ages (a.k.a. The Red Book {of Scenarios}), I thought Number 4, from which the title of this posting has been taken. The lead picture sets up the situation.
"It came to pass that in the first year of Emperor Dementius, the Bulgars along the border invaded the Theme of Thessaloniki, raided several towns and villages, burned a number of farms and caused an uproar throughout the region.  Gathering as many of his thematic troops as he could, together with some Imperial kavallarioi, the local Strategos, one Dmitrios Manikos, set off in pursuit of the miscreants.  Heavily laden with loot as the raiders were, Manikos anticipated overhauling them well before they reached the Bulgarian border.  The Bulgar Kavkhan of Sofia, Attishu, was well aware that the Byzantines could be relied upon to react and retaliate, and had prepared accordingly.

"Splitting his raiding force in three, he took the main body on the raiding expedition, leaving the other two forces - with promises of a share of the loot - flanking the return road at a distance, ready to entrap the pursuing Imperialists. Overconfident and heedless, Manikos caught up with the raiders not far from the frontier..."  Michael Psellophanes The Dementiad.


The game was played out on the 13x7 Memoir '44 hex board - none too roomy, as it happened, for the forces I chose.  The troops were laid out as in the leading picture. The forces were as follows:

Total 6 units, 24 SP.  All except one heavy cavalry are rated AVERAGE.  Possibly to balance the scenario more, the spearment could have been rated poor, but it seemed to me only the more reliable troops would have been taken on such an expedition - quite apart from the motivation in respect of whatever loot they might have been carrying.

Flanking force (Force One in the original):
Total: 4 units, 13SP, all classed as AVERAGE


Now, there was but one Bulgar commander in an overall force of 17 units, 56 Strength points. Something I overlooked, but would certainly consider a second time, would have been to apply the Exhaustion Points to each of the three Bulgarian forces separately. That would have given the separate forces Exhaustion points of 8 (Attishu's), 5 (Force One) and 7 (Force Three) respectively.


The original scenario forces being translated to the Mediaeval period, it remained to transpose the map onto my Memoir '44 board. The tiles came in handy, here, and worked quite well, but addition of the trees gave it a more '3D' look.

Now, for the card activation system. This time I wanted to test the separate Black and Red decks idea. The Bulgar unit total of 17 indicated a 'median' of 8, so they got the red 8, 9, 10s from 2 packs. The 9 Byzantine units indicated a 'median' of 5, so they got the black 4, 5, 6s. The roll for first draw (a die roll seems good enough) gave the nod to the Byzantines' first move. They drew their top card: a six. It seemed to me that carrying on with the pursuit would be no worse that many another action!
They got close enough to send a few arrows chasing after their quarry, but without much effect.  Then the Bulgars drew - a ten. Bad news for the Byzantines! Attishu promptly turned some of his men around to face the pursuers; Force One (bottom left in the picture ) sent one spear unit into the farm near the large wood whilst the remainder skirted the other side of the wood to flank the Byzantine infantry. The advance of Force Three was limited to the light troops only. Even so, there were already indications that must have been worrying for Dmitri Manikos.
Still, a good draw, and Manikos detailed his infantry to deal with the flanking move by Force One, which had already put a dent in the slingers.  The archery from one of the skoutatoi units removed several Bulgar nobles from their saddles.

The following sequence of pictures depict the developing battle, as the  Bulgars contain Byzantine attempts to break out of the encirclement, and tighten the squeeze. Considering the odds on the dice, it has been a feature of these that the shooting and close combat has tended to be fairly ineffectual. So it proved in this action. The bonus for lances moving into contact availed the Byzantines nothing, and thereafter, all three kavallarioi units remained locked in close combat with the Bulgar light and heavy horse. 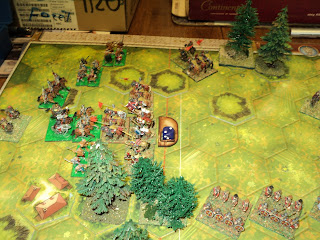 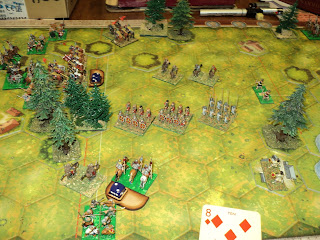 In view of the foregoing picture, I should make some comment about unit facing using the hex grid system. My preference is to call the direct front, and right and left flank front of a unit, all three, as frontal. An attack from any or all three hexes, I regard as a frontal attack.  The flank-rear hex grid areas are outflanking areas. An attack from either or both these areas constitute a flank attack. Finally, an attack only from the area directly to the rear counts as a rear attack. 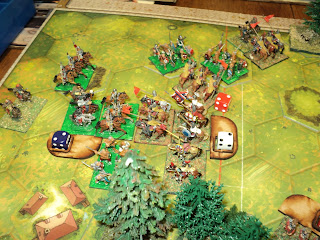 In these two diagrams, you will see to Manikos's right a unit of cavalry taking on two spear units: one directly in front, the other to the left flank front.  But a short distance to the left is the real danger: a unit of Bulgar heavy horse about to charge into their left flank rear - a flank attack. 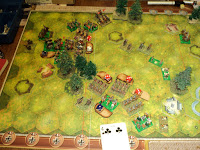 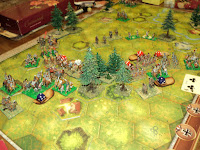 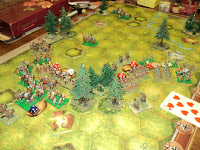 By this time, the Byzantine force had long since sunk past its 'exhaustion point'. Their chances of escape, then, had dwindled to almost nil.  With the loss of his bodyguard, with most of his remaining units standing on just one SP remaining, nothing but scattered remnants could possibly escape the disaster. It would be noticed from the above picture that 'Force One' (bottom right), having lost the heavy cavalry (3 SP) and one from the spears (1 SP) had reached the 'exhaustion point' of 4 SP lost. Although I did not consciously apply these individually, 'Force One' had been committed pretty much to a holding action from early on. Attishu's command had also lost 4 SP, not enough to tip it over the edge. 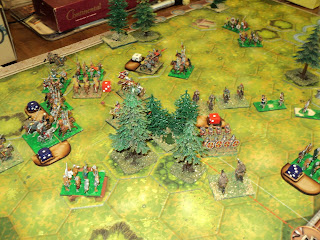 The loss of 8 SP was little enough in the light of the Byzantine loss of 20 when the battle finally ended.
Posted by Archduke Piccolo at 4:27 PM