A while back, I set out a scenario based upon the Sidi Rezegh battle of 20 November 1941. an episode during Operation Crusader - the attempt by 8th Army to relieve the siege of Tobruk.  Unable to make my mind up what rule set to use, I decided to play it as two games.

The first game was played as a Portable Wargame but with the ground scale stretched to the point that the only 'ranged' fire was by the artillery. One hex represented an area about half a mile across. Tank and infantry fire took place at adjacent grid-areas (hexes) only. The thing seemed seemed to work OK, but I now think that AT fire could have stretched to the second hex.


The action opens with 7th Armoured Brigade, having captured the airfield above Sidi Rezegh, then  pushed on towards Tobruk in the hope of easing the break-out by the Tobruk garrison, and perhaps even securing a breach.  Accompanying the Armoured Brigade is the 7th Support Group, comprising a couple of infantry battalions, together with a regiment of 25pr artillery, and portee-mounted 2pr anti-tank guns in similar strength.  The infantry and anti-tank guns are lined up facing north along the escarpment about the Belhamed ridge.  The supporting artillery is close by the Sidi Rezegh mosque.

The primary German objective was to maintain the siege of Tobruk.  That would be achieved if the Allies failed to break through the German lines to the northwest. A breakthough could be said to have been effected if the Allies could occupy and hold northern edge hexes west of the Bypass road. However, the German object was more ambitious that merely to hold.  The plan was to drive 7th Armoured altogether from the area.  It would have been sufficient to capture the airfield above Sidi Rezegh to carry out their instructions.

You will observe at the outset the Hexblitz order chits.  I began with the idea of playing that rule set, but quickly switched to the Developing the Portable Wargame WW2 set.  The game was later replayed as Hexblitz.
The early action brought the Afrika Regiment up against the positions held by 2 Rifle Brigade (2RB), the leading battalion of 21 Pz Div (I/104) against the King's Royal Rifle Corps (KRRC) , and I/8 Pz Bn clashed with the armoured cars of 11 Hussars and the Crusader tanks of 7th Hussars.  Though the early exchanges favoured the panzers, that was not to last.

The brunt of the fighting fell upon 2RB, outnumbered about 3 to 1 (actually 12 to 5 in SPs, both sides augmented by artillery support at 2 SP each).  It was none too long before the Rifle Brigade found the pressure too heavy and the incoming fire too hot.  They soon abandoned the escarpment position, and fell back upon the supporting artillery about Sidi Rezegh.  Surging over the escarpment, III Afrika Battalion followed up.

This opened the right flank of the KRRC holding on to Belhamed.  Even so, it was to be a long time before they could be levered off that feature.  The portee anti-tank to their left helped, that particular unit scarcely coming under attack all day.
The early German successes looked as though they might continue with a rush with the arrival of 15th Pz Div from east of Zaafran.  But hard upon the heels of that arrival, the eastern dustclouds heralded the arriving Stuarts of 4th Armoured Bde coming down the Trigh Capuzzo.  Better placed to intervene betimes on the 7th Armoured Division's east flank, they soon brought II/8th Pz Bn and the I/115th Infantry into action.

The battle between 8th Hussars and the 115th German motorised infantry ground into a stand-off that was to last the rest of the day; but the armoured battle between the County of London Yeomanry (3 and 4 CLY) and 8th Panzer was to develop into a running fight that took them almost as far as Sidi Rezegh.
Meanwhile, close by Ed Duda and Belhamed, the II battalions of the 5th Pz and 104th Schutzen Regiments had arrived. 7th Hussars drew back, leaving most it its tanks on fire and littering the battlefield.  Into the gap surged the leading tanks of 22 Armoured Brigade.  This fresh enemy drove back the 39th PaK unit, and added to the discomfiture of the panzers as well.  Even so, they pulled back only a short distance before once more presenting a front against the British armour.
Honours were shared in the early exchanges between 4th Armoured and 8 Pz Rgt, both losing a portion of the strength in the exchange of fire.  I/8th Pz Bn was still a mile distant toiling up the wadi close by the Zaafran feature.  [A note here about the terrain.  I made the escarpment hex-sides uncrossable by tanks (and only for convenience crossable by the vehicles integral to motorised infantry - a matter that might require revisiting some time).  Tanks could still move as if in good going into and along escarpment hexes, just so long as they crossed no scarp hex side.  The effect of this was, for I/8 Pz Bn that it had a rather tortuous route by which to ascend the 'wadi' to join II Bn in its fight just west of Sciuearat.] 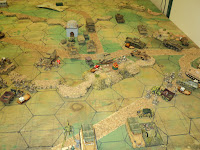 The rest of the front had meanwhile separated, the initial German attacks against Belhamed having been repulsed - though not without heavy loss to KRRC, down to about 40% of effectives still in action.  The armoured units near Ed Duda eyed each other balefully, whilst deciding their next course of action.


At last the I Bn 8th Pz Rgt arrived and at once made its presence felt.  Quite shortly, the CLY tanks deemed it wise to draw back a little, leaving a third of their tanks burning.  But 8th Panzer had, for their part,  lost a quarter their own strength.


The withdrawal of 2RB had permitted the Afrika infantry to seize a good mile and a half of escarpment, leaving the Sidi Rezegh position badly exposed.  Seeking to exploit the eagerly beckoning opportunity, General Cruewell ordered 8th Panzer to drive off or destroy 2nd RTR that was then covering the right flank of 7th Support Group.  The Afrika infantry I Battalion was to strike along the escaprment onto the flank of KRRC, whilst the other two battalions overran - it was hoped - what was left of the Rifle brigade.  104th Infantry was to attack up the Belhamed feature.  The combined attacks, it was hoped, would bring about a general collapse of the British position.
Greatly daring, for it left two active enemy tank regiments in their rear, 8th Panzer did as they were bid. But for one relatively minor success, the whole thing was a frost.  KRRC remained as obdurate in defence as ever, I/361 made no progress, and 8th Panzer were stopped cold, I Bn losing more of its tanks for scant reward.  The sole success was the elimination of 2RB, its scattered remnants becoming POW, or straggling as best they might away from the battle (in short: it took a hit, was unable to retreat, and removed from the table).
The above picture presents an apparently dismal scene, only 2RTR between Sidi Rezegh and masses of German infantry and tanks.  But looks are deceiving.  Sixth RTR has yet to join the action, and out of the frame are two Stuart regiments about to recover their umpty-poo and rejoin the action.

Around Ed Duda, apart from some desultory bickering, something of a lull descended upon this part of the battlefield.


For their part, the panzers were inclined to wait upon the events around Belhamed, in the hope of broadening the overall attack.  The same possibility had as an inhibiting effect upon their adversaries. (Aside: Actually, if memory serves, I was using a unit activation system based on Bob Cordery's card method.  Both sides having 15 units (including commanders), they were given a 'median' of 8.  Rather than cards (bit of a nuisance, in some respects) I rolled a D6 for each side in turn with 1,2 subtracting 1 from the 8 and 5,6 adding 1, to determine the number of units to be moved.  Although I took it strictly in turns, beginning with the Germans, it is possible top randomise the turn sequence from the strict IGo-UGo regime, with a die being rolled every odd move to determine who plays, with the opponent responding on the even moves.  That means it will be possible for one or other side to get two turns in a row.  But after that, only the OTHER side can get the benefit.  At any rate, the action died down around Ed Duda for a considerable time, as the Germans strove to carry the Sidi Rezegh position, against determined British resistance.)
The failure of 8th Panzer at once to chase off 2RTR was not merely a setback, but a reverse that might well have led to disaster.  Two regiments raced up and struck II/8 Pz Bn in the rear.  In the confused fighting that ensued, the panzers held up magnificently.  A swirling fight developed with 2 RTR and 3 and 4 CLY, with the advantages of numbers and position, quite failed to eliminate either battalion of 8 Panzer.
To be sure, I/8 Pz took some losses from 2RTR, and, when they could, drew back to reorganise,  For some time that left II/8 Panzer completely surrounded and down to half strength.  Their chances of survival looked very slender.  Here seeemed an opportunity for the 6 RTR to intervene, but they were quickly prevented from doing so by the  Afrika Regiment.


III/361 Regiment actually reached the 7th Support Group gun line but, despite doing considerable damage to the crews and guns, were pretty much stopped before they could drive off the whole unit.

Somehow, reduced to a quarter of their original strength, II/8 Panzer survived long enough to drive off 2 RTR with the help of the returning I/Bn.  All this time 4th Armoured even with 4 to 1 odds seemed quite unable to finish of the II/8 Bn.  That survival was as decisive, finally, as the Germans' final attack on Belhamed.  At last they prised the KRRC fingers loose from the escarpment, overran the ridge and brought what was left of the Rifles 'into the cage'.

It was about this point that I thought to check on the states of the two forces.  Losses had been heavy on both sides.  All three Afrika Korps formations were much reduced in strength, just 31 SPs surviving out of 52.  Seventh Armoured Division had given almost as good as it had taken - but only almost.  Seventh Support Group infantry had borne the brunt on the side of 8th Army, losing all 10 SPs.  Of the whole group, but 3SPs remained out of 14.  Only 22nd Armoured Brigade had got off fairly lightly.  The result was, however, conclusive: having lost 24 from 48 SPs, 7th Armoured Division had reached the point of exhaustion.  The whole formation might have gone on grimly to prevent German capture of the airfield above Sidi Rezegh, but its commander instead conceded the palm and evacuated as best he could the smoking battlefield.
That was the battle according to a slightly modified Portable Wargames game system.  The modification lay in the gunnery ranges, due to the scale of the battlefield, one 4-inch hex representing an area a half-mile across.  Using the same scale, I was to repeat the action using the Hexblitz game system.

Posted by Archduke Piccolo at 7:38 PM