During the course of enforced (hem, hem) idleness over the last week or so, to allow my eye to recover from surgery,  my thoughts cast themselves back to the blog narrative of a friend - The Vales of Lyndhurst.   After several years been in indifferent health, Barry Taylor seemed for a year or two to be recovering something of his old energy.  But when his health turned again in mid 2013, his vast conception had to be dropped.  He never had the chance to pick it up again, and passed away in October of that year.

The Vales of Lyndhurst was a narrative in the Game of Thrones style, a power struggle that, though it involved the throne of Great Britain, of England in particular, was more a struggle between those who would reunify the realm, and those who enjoyed the profits of aristocratic anarchy.  The Interregnum lasting some eighty years since the execution - some called it regicide - of Charles Stuart, a search  by an aristocratic faction that longed to restore some rule of law into the realm, had unearthed a plausible candidate for the vacant throne.  No mere collateral descendant, the direct lineage, though faint, was unmistakable.  The one question, the issue of legitimacy - the subject of the inquiry was a bastard - the anxious searchers were disinclined to examine.  Upon this person, James III as he would be styled, centred the hopes of the faction who onlynow dared to call themselves - if as yet only in whispers - Royalists.


Great Britain had in those 'lost' eighty years descended into a chaos of rival aristocrats, especially the large landed magnates, all of whom these days styled themselves 'Duke' - with more than questionable legitimacy.  The nation itself had shrunk in stature.  Parliament had become more theoretical than effectual, national executive government having atrophied since the death of the first Cromwell. 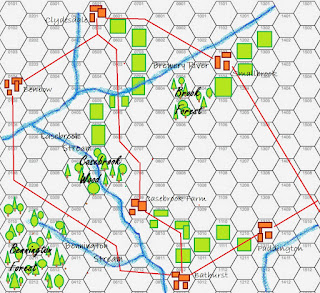 The Royalists' hopes to mature their plans in secret were to be disappointed. Sir Edward Anders, Lord of Lyndhurst had formally adopted James to 'lend verisimilitude to the imposture of James Schiller/ Anders as a non-Royal, if not a commoner, withal'. Even so, the leader of a rival such faction, the ambitious and acquisitive Duke of Kent, whose own intelligence network spread well into the major Continental nations, even unto the Vatican itself, got wind of the Royalist plot.  Perhaps secretly harbouring a preference to be addressed as 'Your Royal Highness' rather than merely 'Your Grace', he would brook no rival for power, no change to the present structureless structure of British governance.  Not, that is to say, until he himself was in a position to impose his own strictures and structures.


The result was later called the Second Civil War, though such was the way of England for last eight decades, it could scarce be said that the Civil War begun by the Great Rebellion of 1642 were yet ceased.  The boy king, James III, proved a popular monarch, the approval of the City of London all the more enthusiastic for his betrothal to the well-known and well-regarded Lady Margaret Hackett, the daughter of the Duke of Essex. Several magnates, whether moved by the same desire for order as the Master of Lyndhurst, or simply observing the direction of the political gusts, fell in behind the Royalist faction.  Taking their cue from the powerful and strong-willed Duke of Kent, others preferred the licence offered by the status quo, or simply rejected the legitimacy of the 'Bastard King'.

Several combats and battles had yielded very little result, tactically or strategically.  Generally on the offensive, and driving towards London, the Confederates, as they styled themselves - there was no question that this faction had anything to do with upholding Parliament - had received a number of costly checks.  Such results rather encouraged the outnumbered Royalists, but there was no doubt that such negative, defensive, successes could in no way advance their cause.  They were merely 'holding the line'.  Until the Royalists could gather their power, potentially greater than their adversaries', 'holding the line' was about as much as they could hope for.

For their part, the Confederates got in a powerful blow by enlisting the aid of the King of France, who sent forth a sizable contingent of horse, foot and guns to augment the already considerable forces of Kent himself.  The aghast Royalists knew at once that at a stroke - a master stroke - Kent had eclipsed Royalist strength.  Thus began a determined drive upon London from south and north, with the Royalist forces outnumbered.  The Commander of the main Royalist Army, Major-General Lord Leopold .Adair set forth to intercept the French-Ducal Army.  The rival forces clashed just south of the small settlement of Clydesdale.

It was at this point, with the battle lines drawn, that the narrative was interrupted, never to be resumed.  Shortly after Barry died, I was asked by one or two other bloggers whether maybe I could take up the story.  Although the idea appealed - it seemed a pity to leave it hanging - this I was reluctant to do at the time.  It was not just the commitment (always problematic with me), but more a sense that maybe it would be a disservice to Barry's memory, at least so soon.  And, frankly, I simply felt I could not have done justice to Barry's conception.

Five years later, how now do I feel about it?  I still feel that my own imagination and commitment could scarcely match Barry's in a narrative like this (if it did, I'd be a novelist).  But it seemed to me that the campaign for London might at least be told to a conclusion. Just by way of a fifth-year requiem for its author.

Such an undertaking will once more see a change, unfortunately, in how battles are to be presented. I never did discover how Barry produced his maps and fought the battles.  Methought, how about a grid-formatted action - a marriage, perhaps of the war games concepts of two such disparate innovators as Bob Cordery and Robert Louis Stevenson?  Grid War Games, and 4-figure infantry battalions and cavalry regiments.


There will be nothing 'British' looking about these armies.  The red coated 'New Model Army' national army went the way of just about all national institutions after 1660.  Not even the St George Cross of England will be much in evidence!  For the figures to be used will be Continental, the Imperialist Army of the War of the Spanish Succession.

Summarised Orders of Battle for Clydesdale:

Posted by Archduke Piccolo at 6:51 PM