Vales of Lyndhurst - To be continued? 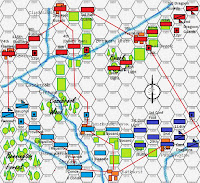 The Franco-Confederate Army, commanded jointly by Chevalier Busset and the Duke of Kent, was met on their northward push for London, by a hastily gathered Royalist Army commanded by Sir Leopold Anders, brother of the Lord of Lyndhurst.  Here is was hoped that Sir Leopold could administer a check to the Confederates, buying enough time hastily to march northward to meet the other Confederate march that was menacing London from the north.

At this point I won't go into the actual fighting, but rather mention certain administrative aspects of continuing this campaign.  In transferring Barry's original concept using map battles, I have elected to make the transfer to grid war games, using my 48" x 52" table, as pictured.  The original I sketched onto a roughly hand drawn grid of off-set squares, which was in turn sketched a little more carefully onto a preprinted hex grid the same dimensional array as my table. I keep blank copies of this grid on file in this machine.  I can print them, or add details using Microsoft 'Paint' as I find convenient.  The small map in the right is the result.

Now, a rule set was wanting.  So I made one up, a 'Lonely Brain Cell' set, for these battles.  Borrowed heavily from the Bob Cordery concepts, with a little bit of Memoir '44 thrown in and a die rolling system I suggested maybe eighteen months or so back, I wanted something quick that produced a plausible looking battle.

What follows is really just a sketch.  I hope to refine it later.

Horse and Foot may form
Line - 1 rank of 4 figures
Column - 2 ranks of 2 figures
Guns may be deployed, limbered or in the process of deploying or limbering.

Foot:
Standard movement is 2 grid areas in good going.
In any kind of rough going, fording rivers, passing through woods, enclosures, built up areas, this is reduced to 1 hex only.
Units entering rough going, river hexes, BUAs, enclosed fields etc end their moves at once, except as follows.
Foot in column marching along a road may add 1 hex to its movement provided at least two of the three moved are on the same road, and the remaining one is on the same road or good going.
Foot in column, moving along a road for their entire move, ignore all other terrain constraints.

Horse:
Standard movement is 4 hexes in good going.
In any kind of rough going, fording rivers, passing through woods, enclosures, built up areas, this is reduced to 1 hex only.
Units entering rough going, river hexes, BUAs, enclosed fields etc end their moves at once, except as follows.
Horse in column marching along a road may add 1 hex to its movement provided at least four of the five allowed are on the same road, and the remaining one is on the same road or good going.
Horse in column, moving along a road ignore all other terrain constraints whilst they remain on the road.

Guns:
To move, Guns must be limbered.
Limbered Guns (except galloper guns) move 1 hex in good going, and may travel 2 hexes along a road.  Galloper guns can travel 1 extra hex.
Guns my cross rivers and streams only at bridges and fords practicable to vehicles.
Guns may not enter woods or marshes or river hexes except by a road or track that is practicable to vehicles.
Guns require a whole move to limber up or to deploy (unlimber).

Only artillery are able to carry out distant shooting.   The scale of this rule set is such that all other combats, shooting or hand to hand, take place between adversaries in adjacent grid areas.
In all combats, units roll as many combat dice for effect as their current SP, modified by terrain effects.
All close combats are competitive, both sides rolling and determining hits.  A unit may attack one unit only; the defender rolls against all attacking units.  Units that remain in contact at the end of any given player's turn continue automatically to battle in the subsequent turns that they remain in contact.
A unit whose combat dice allocation is reduced by such modifications, still gets to roll 1 combat die.
The results of the combat dice rolls are assessed as follows:

Retreating units encountering friend to their rear, may pass through them to carry out their retreat.  A foot unit may also do so, provided the destination grid area immediately behind is clear, effectively retreating 2 hexes instead of 1.  This is the only time a Foot unit may retreat 2 hexes on the basis of 1 '4' hit.

Combat dice are modified by terrain, whether occupied by the target unit, or sometimes that occupied by the unit being diced for.
Combat Dice = Current SP modified as follows, or 1 whichever is the greater.

Reduce Combat Dice by 2 if:

Reduce Combat Dice by 1 if:

Heavy Cannon (12pr):  Short range = 3 hexes; long range = 6 hexes
Medium Cannon (6-9pr): Short range = 2 hexes; long range = 4 hexes
Light Cannon (3-4pr 'galloper guns'): Short range = 2 hexes; long range = 4 hexes
At short range Guns' Combat Dice is DOUBLE their SP unless they are involved in close combat
(I am conscious that this isn't quite right, as enemy Foot and Horse can close to close combat without being shot at by grapeshot, but not sure yet how to fix it - even whether it needs fixing.  I am considering allowing one round of 'reserved' fire by defending units, but that will make attacks very difficult.)
For initiating moves, determining the battle outcomes and so forth, I used Bob Cordery's Portable Wargames system.  .... 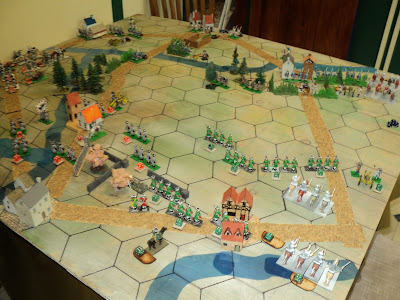 Next posting will outline the composition of the armies, strength points and any other details that come to mind.  After that will come the narrative of the battle.
To be continued.
If anyone has comments or suggestions to make to the above, they may be used to modify this posting.

Posted by Archduke Piccolo at 4:32 PM