Following the capture of the regional capital, Madasaiwannabe, the Tchagai Rebellion/ War of Independence fell into something of a lull for several weeks.  The Rebel victory had cost dearly, and the Baluchistan Armed Revolutionary Front (BARF) army had just about to be rebuilt.  The Government forces had been even more comprehensively mangled; it would take months before the 22nd Punjanjoodi Battalion could be brought up to strength.  In the event, the BARF managed to assemble a sizeable force rather before the Government could. 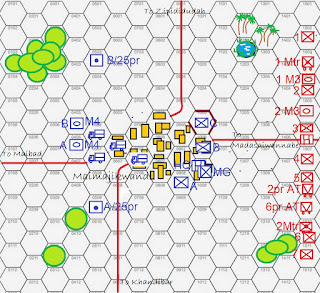 Despite his heavy defeat, Lt-Col E. Mugglethwaite not only kept his rank, but continued to hold his command.  The Court Martial had, to the Colonel's surprise and relief, been quite sympathetic.  The Rajistan Imperial Military Authority retained him in command, ordered him to gather what forces he could, and once more face the upstart rebellion.  He called upon the motorised 17th Choklit Ghandhi Battalion to replace the 22nd, and, to give his small force some heft, two squadrons from 6th Bananaramahputra Hussars.  They were equipped with Sherman tanks.  To round off his Brigade Group, the Colonel added two 25-pounder batteries from the 1st Tchagai Artillery Regiment.

Urgent rumour of BARF moves toward the Provincial capital, Maimajikwand, at the foot of the broad valley of the same name, Colonel Mugglethwaite made haste to secure the place before the rebels could arrive in force.  He was just barely in time.

Notes:
1. I wrongly failed to account for the 25pr prime movers, on the rather specious grounds that they were integral to each 25pr unit, so in effect the Army actually had 42SPs.
2. I didn't count the HQ vehicle as a separate unit.
3. All units were regarded as 'Average'.


Disappointed at his failure to seize the town unopposed, the self-styled Colonel Peenut Buttahjars (actually still holding the rank of rissaldar in the Army of Rajistan) drew up his considerable force a mile or so east of Maimajikwand.   Better equipped now than it had been in the previous action, the BARF army had managed to purloin from various Imperial sources (easy, when you have sympathisers 'inside',  to stage breakdowns and other assorted incidents) a couple of squadrons' worth of M3 Stuart light tanks, and a similar number of portee-mounted anti-tank guns.

Note: All units were classed as 'Average', except for the portee mounted anti-tank guns, which were classed as 'Poor'. This was to reflect their comparative vulnerability as fighting vehicles (they being engaged in this and subsequent battles whilst mounted).  I was later to discover that maybe the tank-anti-tank aspect of the rule set could use some refining.  That will be a topic for later.


Lieutenant-Colonel Mugglethwaite's overall plan was to defend the built up area with his infantry, whilst covering the open plains on either flank of the town with his armour and artillery. For his part, Colonel Peenut Buttahjars resolved upon the tried and true plan of his previous battle, a straightforward double envelopment. And see how the Imperialists like it!

Posted by Archduke Piccolo at 4:12 PM