Following their success at the Provincial capital of Maimajikwand, the Baluchistan Armed Revolutionary Front (BARF) rapidly gained momentum.  Within mere days, there they were, arrayed before Maibad Junction, a vital rail nexus connecting Provincial Maimajikwand with the National Capital, Nawabsbad, the major sea port, Khandibar, and the natural wealth that lay beneath the hills and mountains to the north (SEE MAP). 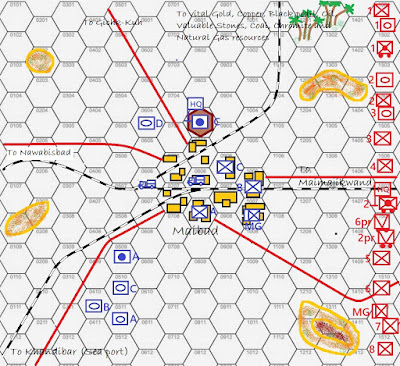 Still in command of the government forces charge with resisting the rebel advance, Lt-Col Mugglethwaite had had impressed upon him in no uncertain terms that Maibad had to be held, at all costs. Once again, the Government held the built-up area in strength, keeping one artillery battery in a fortified point north of the town, and another close by the Khandibar road to the south.  The 6th Bananaramaputra Hussar Armoured Regiment now had all four squadrons available.  'D' Squadron covering the north side of the town, the bulk of the armour stood waiting to the south.  The Government 'wings' presented a slight refused front, with the idea of taking any rebel envelopment in the flank.

The size of the Government force was determined by adding 30 to a roll of 3D6.  The roll was a good one: 14, giving 44 Strength Points.  Incidentally, the fortifications protecting 'B' Battery were not included in the calculation. 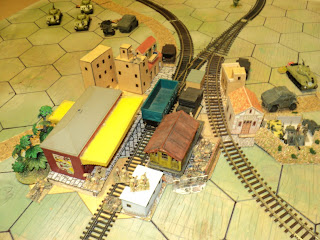 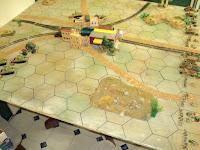 The size of the Revolutionary force was determined by adding 42 to a roll of 6D6.  The dice-roll came out at 23 - another good roll - for a total of 65SPs.

Please pardon the delays in getting these written up.  The corpore is a little lacking in sano at the moment, so I'm taking things a bit easier.  In fact, the campaign is now 5 battles deep, with the fate of Tchagai still in the balance.  There are many questions to be answered!  So there is plenty more to come!


Posted by Archduke Piccolo at 3:17 PM