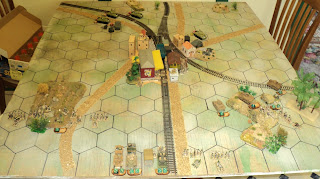 The Baluchistan Armed Revolutionary Front (BARF) attack upon Maibad Junction proved something of a replay of the battle of Maimajikwand.  Colonel Peenut Buttahjars threw forward both flanks to seize the high ground overlooking the town from northeast and southeast, from which vantages he intended the so-far-successful double envelopment.   Retaining for the moment only a vestigial mobile flank guard on the north side - a single squadron of tanks (D/ 6th Bananaramaputra Hussars) - Lt-Col Mugglethwaite retained a more powerful strike force close by the Khandibar branch line southwest of Maibad Junction - 3 Sherman squadrons backed by a gun battery.  It was hoped, of course, that the open plain would obviate the need to leaven this force with infantry. 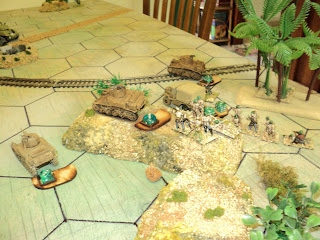 The development of the BARF armoured thrust north of the town hastened the Lieutenant-Colonel to order two squadrons around the town to meet it, leaving just 'A' squadron to the south. 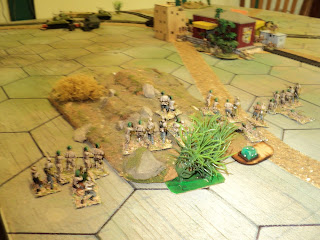 The hope was that the heavier weight of the Shermans would prevail over the lighter Stuarts. Although this might have seemed simply a hasty reaction to the BARF move, this had been Mugglethwaite's plan all along - to hold out the bait of a seemingly open flank in order to bring on the engagement he desired (well, that's one way to narrate events as they transpire!). For the rest, it was anticipated that the 25pr battery would switch to anti-tank mode (once the tanks got close enough) and flanking machine-gun fire would administer sufficiently discouraging hurt upon the enemy right wing. 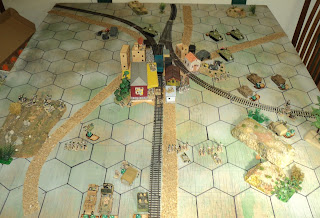 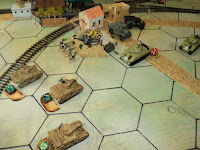 Events in the north developed quickly. First (BARF) company coming under gunfire, fell back alongside the battalion mortars. Under the cover of mortar fire 2nd Company made a dash for the fortified guns, bringing them under close assault, and at once neutralising them. The tank battle began with D Squadron knocking out some tanks of 3rd (BARF Armoured) squadron just as B and C Squadrons came up to engage at a range the lighter tanks could not match. 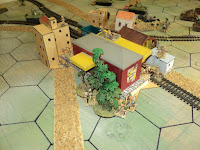 At about this time, on the other flank, 6th Company made a dash for the Government machine position covering the southeast corner of the railway station. For a wonder, they drove back the gunners, and quickly effected a lodgment in the town. It was probably at this point that things started to go wrong for the Government, though at the time this was not apparent (Fact is, the dice rolling for the BARF infantry was phenomenal in this action!) 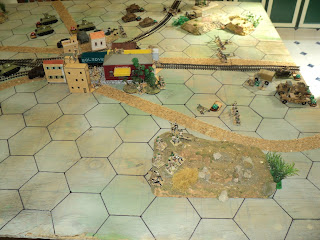 So far, the rest of the BARF forces had scarcely made any impact on the action. The portee anti-tank guns hadn't even moved from their start line, and the left wing hook had yet fully to develop. Only 2nd and 6th Companies were for the present closely engaged, the former having taken some loss (1SP) already.  Colonel Mugglethwaite had taken the the defence of 'B' Battery position personally in hand.  BARF were not to find the position easy pickings - in the event the battery position was never taken by force. 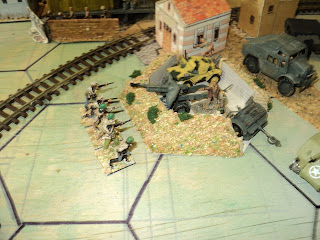 The action becoming entangled on the north front, the southern sweep gathered pace. A Government counter-attack threw 6th Company back out out of the town, but failed to recover the buildings there. The gun fire of A Battery and MG fire of A Squadron proved no discouragement to 8th Company that formed the BARF left flank. Help was racing up in the form of the portee-mounted anti-tank guns, as fully five BARF infantry companies, with MG and mortar support fire, were now assailing the little town from the south and southeast. The garrison was scarcely placed in a position to resist, as 3rd and 4th Companies, nor far distant were closing from the east. Only 1st Company were out of the range and out of the action. They would not be so for much longer. 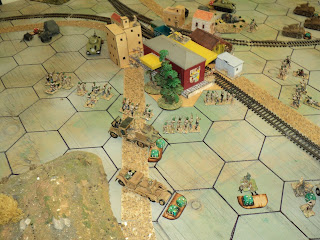 The anti-tank guns were pulling up into battery position as the BARF infantry plunged into the town.  Less effective within the precincts, the machine gunners (2SP only) were very soon overwhelmed.  1st Company swung in behind and to the left of 2nd Company to close to engage C Company, and B Company had 3rd and 4th BARF to contend with.  That left A company, alone once the machine gunners were eliminated, facing 5th through 8th Companies.  A squadron was unable to intervene, neutralised by the portee guns, the 6-pounders of which knock out a small number of the tanks.  All the same, the rebels were finding town fighting to be no light matter. 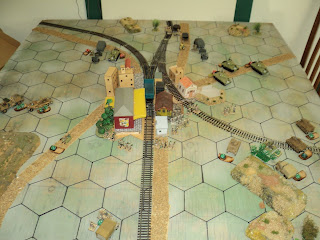 That the tank battle went the Government way flattered to deceive.  The lighter BARF armour having lost perhaps half their tanks - 3rd Squadron was particularly hard hit - they fell back alongside the 1st Battalion mortar position.  But the equally battered Sherman didn't follow up, staying in place to for a protective screen.  The moment the opportunity presented, Colonal Mugglethwaite drew 'B' Battery out of its position, and ordered the evacuation of such troops remained with the town.  Under cover of the tanks, the artillery and truck-mounted infantry drew off to the west. 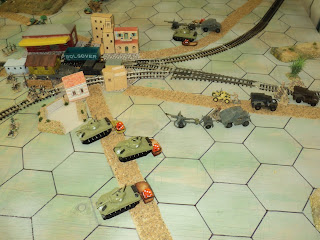 B Company was never to make it.  Almost surrounded, they tried to thread the eye of the needle of encroaching rebels, and seemed for a moment likely to break clear after all.  At least twice, importunate rebel attacks met a sharp and fatal riposte.  But there was no transport to take them out of the town, even had they made it so far.  Finally cut off, what remained of the gallant B Company laid down their arms. 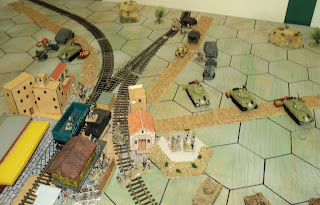 The result of the this action, if not the overall outcome, came as a surprise in two ways.  The first was the relative ease with which the rebels overran the southern sector of the Government defences.  The other was that, so clear cut was the outcome foreseeable from an early stage, that the victory was complete before either exhaustion point was reached.

Here, for the historiographer who likes numbers, the costs of the action:

The loss of such a vital rail communications nexus at last caused the Government administration some concern.  Lieutenant-Colonel Mugglethwaite was recalled to the capital, and, indications that BARF's next objective was to be the sea port Khandibar, Brigadier P.J. Damwright was selected to command the defence of the place.

To be continued...
Posted by Archduke Piccolo at 2:04 PM