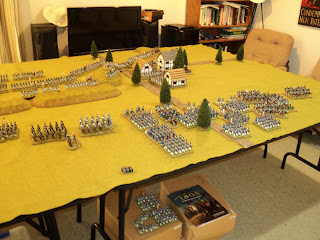 We left the previous episode, the attack of Loison's Division having been brought to a standstill, with the midday arrival of Malher's Division, its two brigades in battalion columns, advancing astride the Unter-Elchingen road. 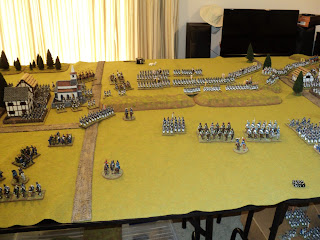 Badly mauled though Loison's Division had been, one battalion still remained clinging to its southern quarter of Ober-Elchingen.  This corner was to remain in French possession for the rest of the day. Of course, the Austrians had the strength in numbers to have driven out the French at the point of the bayonet, but it appears that command and control problems inhibited any such show of aggression. 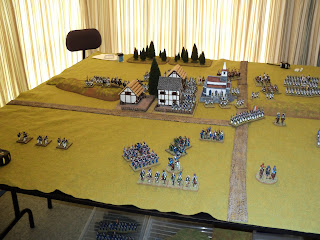 The next few pictures show the situation on the French left at around midday, the time Malher's brigade began its march upon the right. 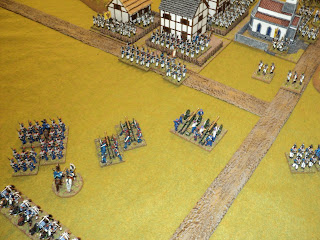 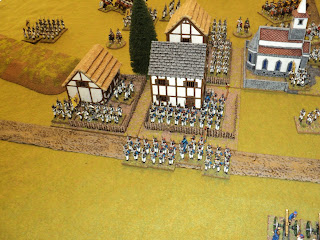 The liaison between Loison's and Malher's wings was maintained by Colbert's light cavalry (hussars and chasseurs).  Small as this formation was, it was hard to risk it against the mass of Austrian infantry upon the plateau beyond the escarpment.  At one point about mid-afternoon, the 10th Chasseurs-a-cheval felt sufficiently emboldened to chance their arm against the Austrian Schwarzenberg Uhlans.  It did not go well.  Although the chasseurs inflicted some hurt upon the uhlans, the latter doubled the pain upon the chasseurs.  Off went the chasseurs, and Colbert was left with only his hussars in hand.  These he declined to risk further. 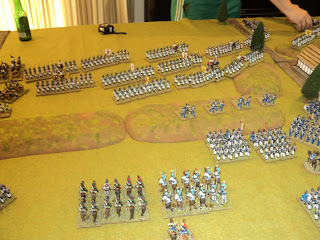 But by now the main interest in the battle was being sustained by Malher's nine battalions, his brigaded skirmish companies and two gun batteries.  As Labassee's brigade, led by a cloud of skirmishers, pushed up against the escarpment just west of Unter-Elchingen, Marcognet developed his assault upon the village. 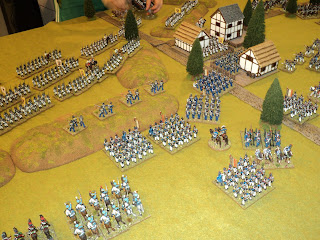 The latter flung the Austrians in short order out of the southern sector of the place, and even induced the Austrians to abandon the eastern.  It seemed that the whole village would very quickly fall into the hands of the French.  Meanwhile, Laplanche's dragoons, accompanied by horse batteries, were fetching a wide sweep around the eastern end of the village, in the hope and expectation of falling upon the Austrian flank. 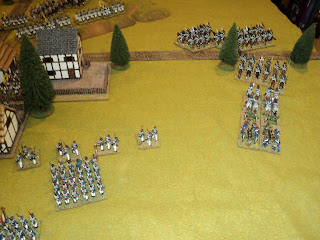 This attack seemed to promise rather better results than achieved by Loison... 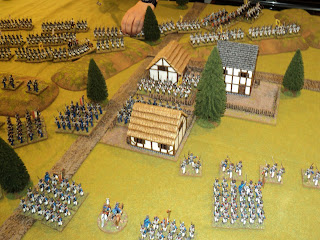 ... and then it all stalled. The defenders of the village were Austrian grenadiers, and they seemed determined to stay. At this point, Marshal Ney bethought himself to move closer to the Unter-Elchingen action to ensure the attack would be kept up, unrelenting. Now, in this rule set, when rolling to activate formations, French units must score anything but a 6 on a D6 to do much apart from shoot. I gather that the Austrians have to avoid rolling a 5 as well.  However, if a formation (Division) commander is within the command radius of the Corps or Army commander, a 'failed' score may be rerolled. In effect, a formation commander 'under command' rolls two dice. That was why Ney moved. 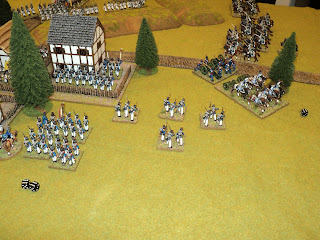 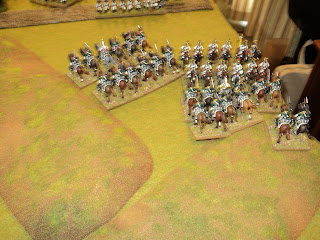 Unfortunately for the continuing narrative, I forgot for a considerable time to take any more pictures, which left the most dramatic moments without a pictorial record. Once Malher's Division again lurched into motion, Marcognet continued to find his eviction notices being defied by the lone and isolated grenadier battalion. For his part Labassee pushed up the escarpment unopposed, his skirmishers pushing forward into the Austrians' faces. Although inflicting some damage upon the Austrian infantry, the French weren't having things their own way there, neither. 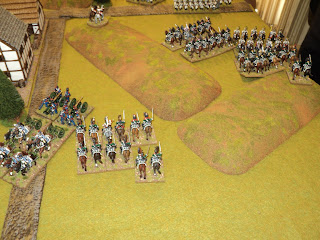 On their side, the Austrians had pulled in their left flank, leaving the Unter-Elchingen garrison isolated, but making way for two regiments of cavalry - what appeared to be the Hohenzollern-Hechingen Cuirassiers and the Blankenstein Hussars. Continuing their sweep into the Austrian left rear, the 18th and 19th Dragoons charged up and over the escarpment and into this enemy flank guard.  Eighteenth Dragoons swiftly rode down the opposing hussars. One might have expected the reverse result from the 19th Dragoons' encounter with the cuirassiers. The melee was certainly prolonged, and the dragoons knocked about, but the heavier Austrian horse also broke in rout. 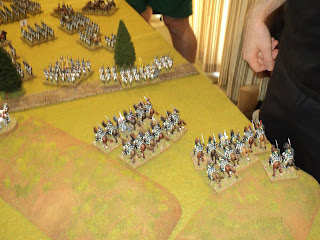 French jubilation can be imagined, as can Austrian dismay.  The rout of the Austrian flank guard, and the impending irruption of French horse and guns upon their now exposed flank caused several infantry regiments in turn to break towards the rear.  The beleaguered grenadiers in the Unter-Elchingen promptly abandoned the place, leaving it altogether for the French. 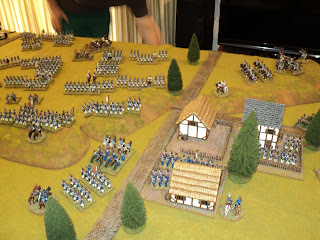 All this was most encouraging. Were French fortunes about to reverse? 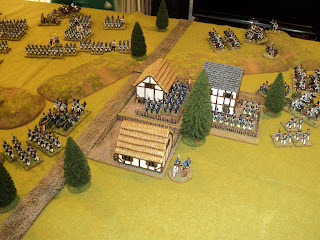 Not... really. That glorious cavalry charge was the one bright - even brilliant - spot upon a very dark day, apart from a further glimmer, towards dusk. Labassee's projected assault upon the Austrian left centre was abruptly repulsed, though with heavy loss on both sides.  Two of Labassee's battalions were shattered and departed the field, as eventually were the skirmishers. 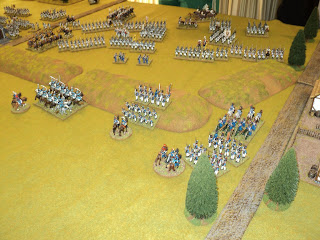 My main reason for going after the villages was that they together formed bastions punctuating the escarpment 'wall'.  Capture them, the main Austrian position would be vulnerable to attacks from the flanks.  This was not 'how it was done' historically.  Then the French just punched straight through the centre, up and over the escarpment. When I surveyed the field, I didn't believe such a course achievable, though maybe I ought more to have used linear formations. 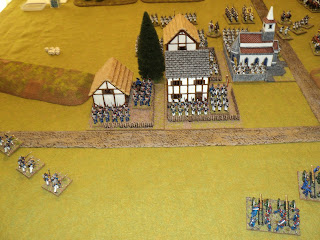 Malher and Laplanche having pretty much achieved all they was going to achieve, it remained for Loison to see what he might accomplish with what remained of his exiguous command.  A battalion of light infantry had maintained a watching brief ever since late morning, suddenly, late in the afternoon, saw a chance to carry or seize the west end of Ober-Elchingen.  In they went; out went the garrison; and now half of Ober-Elchingen was in French hands. 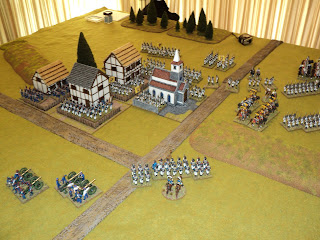 As night drew in, both sides could contemplate the stricken field.  Who had won?  At the time, I figured it to have been a French defeat, plagued all day by misfortune.  It was certain my French corps had been fought to a standstill, and the Austrian army remained firmly on the field.  I didn't quite realise that the Austrian army had taken almost as severe a battering. 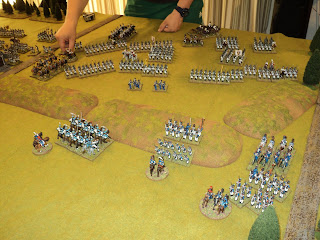 The 15 units the French lost were spread fairly evenly throughout the Corps, only Rouget's brigade being so badly wrecked that but one battalion remained in hand.  At least 3 other brigades were within an ace of breaking.  Austrian losses were far less evenly distributed.  The 14 lost units were largely from 3 small (and therefore somewhat brittle) brigades.  But what secured for the French a semblance of victory - enough for Emperor Napoleon to claim it as such in his Bulletin - was the capture of half of Ober- and the whole of Unter-Elchingen.  But the cost had been practically to have wrecked VI Army Corps. 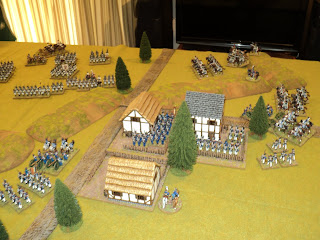 My thanks to Mark Ottley for inviting me to join in such an enjoyable and fine game; and educational too.  Some aspects of the rule set in use were a little perturbing to Paul and me both, but I believe that they are still under a certain amount of fine tuning.  There was no problem with overall playability, esopecially with Mark keeping very busy as moderator.   The entire kit and caboodle - armies, terrain and table - are his, and a joy to play with as well as to look at.  Paul and I have had many a battle. It is not unusual for them to lead, such as this one was, to 'un combat acharné '. 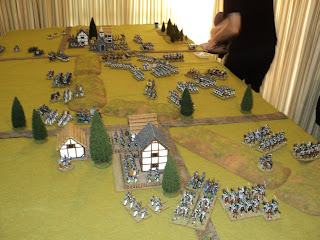 Posted by Archduke Piccolo at 3:08 PM