Expedition on the Limpopo Trail (2) 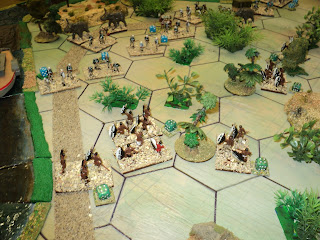 The Most Reverend Timothy W. Shoesmith
Bishop of Willoughby-Shawbridge...

My Dear Timmy -
Greetings from your distant friend, far away in the most benighted region of the Benighted Continent, m'Butuland.  It can not be said that my mission here redounds dazzlingly to the Glory of God; after two years and some months, my congregation might be told off upon the digits of barely half my limbs.  The sin of Pride runs strongly among the M'Butu, a foe, perhaps worthy of my steel? -or perhaps a lesson to myself in humility.  It is as Providence wills.

The Pride of the m'Butu was not abated by the encounter a few days ago (as I write) between them and a colonising expedition mounted by Azeitona upriver from their coastal town of Vertiginus.  By the time this epistle reaches you, you will no doubt have learned of the fate of that expedition from other narrators.  I was an eye witness of that horrible encounter, invited - not to say compelled - to join the entourage of King-Chieftain Barra Kuta.  By the Grace of God he did not force an assegai into my hand, but I was rather enjoined to add my prayers to the chants of the shamans to invoke the assistance of what spirits dwelt in the land of the m'Butu.  Having evinced not the slightest interest in my sermons and stories, yet perhaps the King took the view that every little thrown into the scales might be all that was needed to tip the balance in his favour.  So little, of course, does he know the Power of the Almighty.

Placing his few muskets in a blocking position, a short distance beyond a bend in the trail, he detailed his three other bands, Pili, Wa Tatu and Wa Nne to track through the bush to attack along the length of the column.  The former two became somewhat bunched together, and, instead of attacking the rear of the column tended at first towards the middle.  Meanwhile, Wa Nne had made slow progress.  They did not make contact with the Azeitona until the combat was well established all along the line.

.... (From this point I shall summarise the good Reverend's account in my own words...) 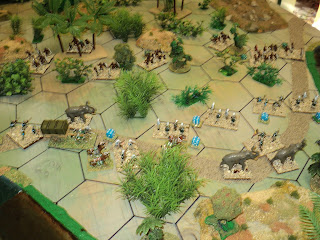 The Azeitona got the first move.  The lead company, rounding the bend where the bush encroached upon the trail, set eyes upon several hundred m'Butu warriors awaiting them across the way. Hastily drawing back slightly down the road, they waited for the rest of the column to close up.  This at once provoked King Barra Kuta to such a pitch of bellicosity, that he waved forward his blocking band. Pausing only to deliver a volley from his muskets - and a surprisingly effective volley it was, too - the whole band waded into a close quarter fight. Along its full length the column lurched to a halt.  In those first moments, the expedition lost perhaps 4SP (strength points) with hardly any compensating damage to the m'Butu. 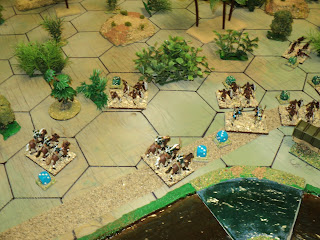 As they rushed through the bush, the bunched bands of Pili and Wa Tatu shook out into something more resembling a line.  Pausing briefly well back from the forest fringe, the flanking bands planned to close with the column in a quick rush, before the Azeitona soldiers could get off much rifle fire.  One company of Wa Tatu, strayed too close to the forest edge and came under fire, but otherwise the tactic paid off. 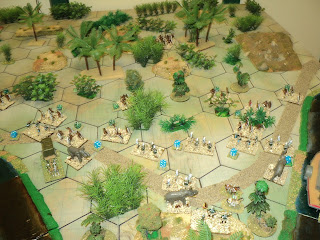 Surging out of the bush, three bands of m'Butu laid into the startled Azeitona riflemen, at which the whole column found itself under a close combat of hack, slash, stab, thrust, cut, parry; screams, yells, groans and battle cries. At least twice, King Barra Kuta came close to injury or death; Tenente-Coronel Relaxado, three or more, as the stands they accompanied took hits. 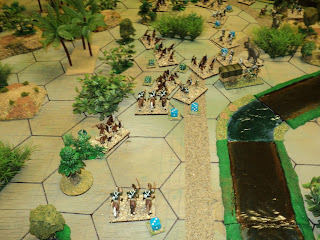 In the early exchanges the m'Butu ignored their losses to keep up the close quarter pressure upon the reeling column - that is to say, I accepted the losses rather than take the 'retreat' result of several of the close combat dice rolls. That couldn't last very long, of course, and it contributed to the casualty rate of the m'Butu fairly closely tracking that of the Azeitona. A couple of early counts indicated that after the initial blows in favour of the natives, the Azeitona troops were giving as good as they were receiving.
I'll let the pictures tell most of the story from here. Suffice to say that gradually m'Butu pressed the Azeitona soldiery onto the road among the baggage animals, and even into rising ground within the river bend. The supporting gunfire from Sonolenta was only moderately successful in inflicting casualties, and not at all in keeping the spear-wielding m'Butu off the embattled column.
The Tenente-Coronel had wisely placed his cavalry at the rear of the column, whence they could see and intervene against trouble further up the trail. But they too quickly found their hands rather too full of enemies.  The moment they drove off one company, back would come another.
All the time, the final band, the Wa Nne were rushing through the forest, only to find it hard to insert themselves into the scrimmage along the road.

Chasing one Pili company into the edge of the forest, the Azeitona horsemen found themselves entangled in a verdant melee among the boles and vines and divers foliage. Eventually they scattered the natives, but one troop at least had taken damage. This was the first stand lost to the m'Butu, but by that time the Azeitona had lost two, leaving the baggage train here and there badly exposed.

Never able to mount any concerted attack, the Azeitona infantry made sporadic company sized thrusts to keep the natives from the road. Such was the impetuosity of the m'Butu (I really was having a good deal of the fun!) that the column, much reduced, was being forced onto the trail, and even beyond it into the forested river bend.
Early on, perhaps after 4 turns or so, I asked for an accounting of losses, not in the expectation of either side having reached their exhaustion point, but rather to see how they were tracking. The Azeitona column had lost 12SP, the m'Butu 9, indicating that after the initial surprise, the soldiers were matching their warrior opponents, despite the few opportunities to use their superior firepower. This was, by the way, why, as the m'Butu, I was keen to keep the fight close, despite the losses that policy incurred (taking the loss instead of retreat options). Late in the action, closely pressed as they were, the column was taking losses when 'retreat options' were denied them on account of crowding, proximity to other enemies, or (in the case of the baggage) impassible forest.
Two or three turns later and the SP loss had almost doubled.  Azeitona had lost 20, m'Butu 17. Had we been using the 'per spec' loss of one-third of the original SP, the action could have been called right there: both sides having reached their exhaustion points of 17 (bearing in mind we thought the Azeitona started with 50SP) and 16 respectively. But as we had already determined upon the 50% exhaustion point, the battle carried on. 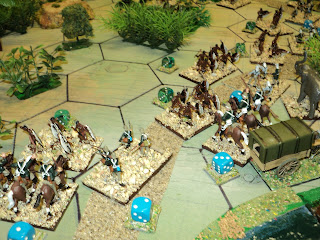 By the time Azeitona had reached its exhaustion point - 25SP lost - m'Butu were in scarcely better case, having lost 20 or so - still in aggressive fighting trim.  Paul had a run of bad luck shortly before this point, for a whole turn unable to score a single hit.  I was to return the compliment a couple of turns later, but promptly followed that up with a whole string of hits and SP kills that tipped the Azeitona morale over the edge. 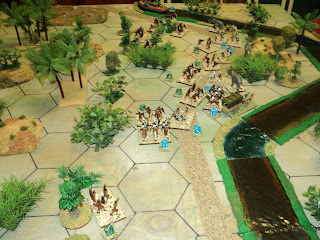 Huddling in the river bend they managed to fight off the attacking warriors long and effectively enough, that they, too, reached their exhaustion point (23SP).  The attacks faded away, the warriors drew off into the forests, and, apart from the dead and dying, the trail was clear. 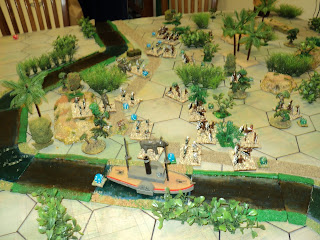 That was, of course, the end of the expedition.  The losses had been far too heavy - a good half or more of the soldiery were casualties, and much of the baggage train had been destroyed or plundered.  At least the gunboat could carry many of the wounded back to Vertiginus; the surviving column had to straggle as best they could back down the trail.  The m'Butu were well satisfied with their victory... 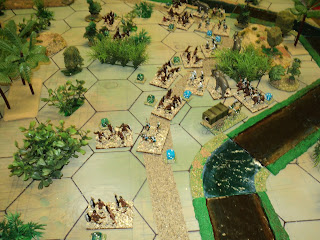 (We take up once against the missive of Reverend Juggins)

There is no doubt that the m'Butu have clapped a stopper over the ambitions of Colonel Relaxado and the Azeitona Colonial Office. There is equally little doubt that, despite their grievous losses, the m'Butu think no end of themselves for their victory. The expedition lost a good half of its soldiery, and half its baggage as well, as attested by the booty the m'Butu bands brought away. It will be some while before the Azeitona will mount any similar enterprise; much less are they in a position to mount any time soon a punitive expedition against the natives.

For his part, King Barra Kuta gave no indications of continued hostility against the Veriginus colony itself, going so far to declare his forbearance, his wish for the resumption of good relations, and returning to the colony a number of prisoners, combatant and non combatant alike, taken at the battle of the Limpopo Trail. For a benighted heathen, the King shows a measure of good faith that many a Christian might do well to emulate.  But the line has been drawn in the sand, he declared through his emissary - myself standing as translator - 'so far, but no farther.' 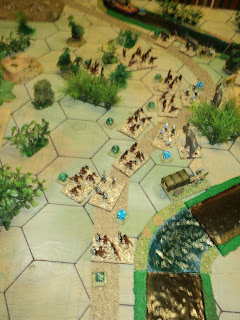 Finally, I thank you for that small consignment of Bibles and tracts that arrived here at the King's kraal six months ago.  I would request that you send more.  The damp climate of the Big Rainy Season is not kind to their bindings nor to their pages..." 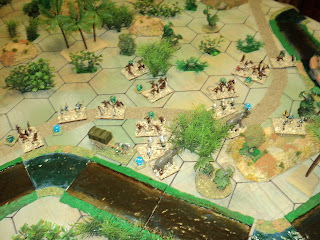 Posted by Archduke Piccolo at 12:39 PM