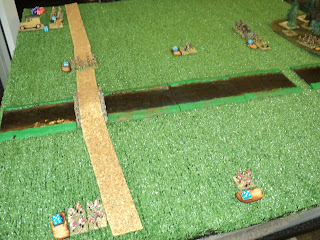 For the first time in a long, long time, Jacko and I visited the club of which, as fully paid up members, we all too rarely avail ourselves. He brought along his WW2 Romanians and Italians; I brought some Russians, a little bit of terrain, and my metre-square 'grass' mat that I originally bought to make hills from, then changed my mind about its purpose. 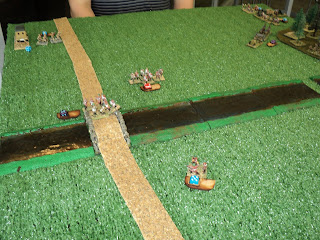 On this we played several One Hour Wargames scenarios. I don't recall the names of all the scenarios, unfortunately. The first had the Axis forces (a mixed Romanian/Italian battlegroup) defending a river line, crossable only at the bridge and a ford close by a forest. Half the Russian forces began off table, arriving after several turns behind the Axis left flank. 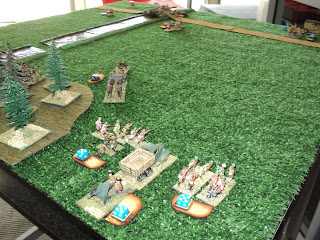 To tot up losses of strength points, each unit having 15 to begin with, we colour-coded the dice in the holder. The blue dice represented 11-15SP, the purple dice 6-10SP, the red dice 1-5SP. As you might see from the pics, the Russians forcing the river crossing got rather badly knocked about. 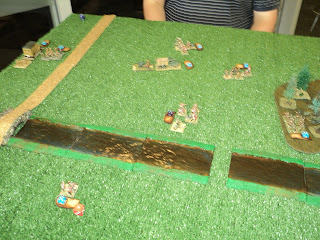 The Axis were split in two, some units striving to reach the bridge, the last skulking in a wood whence they were eventually winkled out. 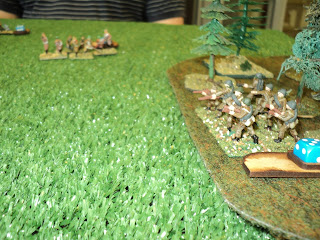 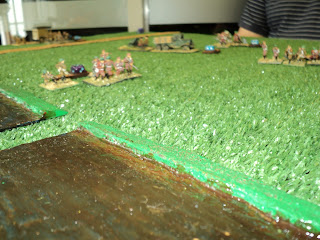 The second action was 'The Bottleneck'. I had the defenders in this one, and frankly I made a pig's breakfast of the defence. The Russians comprised 3 infantry units and an AT gun (you might call them 3 infantry companies and an anti-tank gun company) to defend a point along the road that passed between a forest and a lake, or mere.  Beyond the lake was a stretch of open country an attack might choose as an alternate approach. 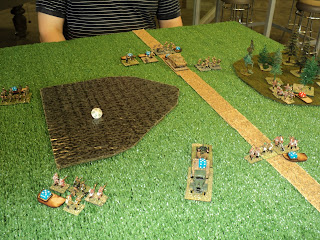 Unfortunately Colonel N.O. Tverybrightski placed a company in ambush too far forward, out of support from their comrades in rear of the lake. By the time they fetched up where I should have placed them in the ... erm ... first place, they were down to 4SP remaining. Meanwhile, the Axis got pretty much their ideal composition for this operation: 3 rifle companies, a tank company (M13/40, I think), and two batteries of mortars.  The mortars were the killers, once the Axis forces got close enough to call down the support fire. I suppose I ought to have been thankful to have got an anti-tank gun, but I don't recall that I got the better of the gunnery duel. This one was an emphatic Axis victory. 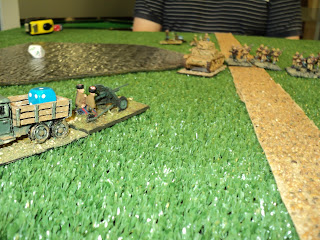 On to the next scenario: 'Blundering Relief' - a kind of antithesis of Don Featherstone's famous 'Auberoche' scenario. The Russians are advancing upon an axis-held town. As in the previous scenario, the Russians had just 4 units: 3 rifle companies with mortars in support. The town's garrison comprised one company of Romanians, with a second company off to their right flank. 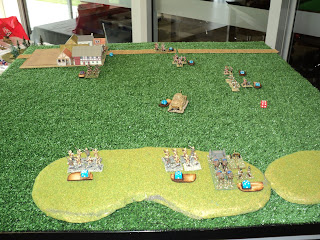 To the dismay of the Russians, they found the ridge skyline to their left swarming with Italians: tanks, rifle companies and anti-tank guns. It was probably fortunate they had no mortars. But in this scenario, Colonello Giovanni da Clotta elected to send one company at a time onto the flank of the Russian advance. Perhaps this was less a predilection for piecemeal, penny-packet attacks as an excess of caution. Be it noted though: this was a condition imposed upon the role played by the Axis forces. Without it, we really would have had, potentially, a Russian front Auberoche. 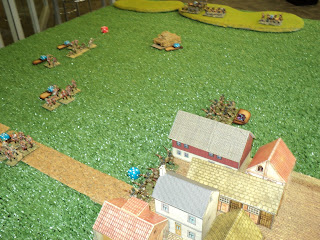 The relief forces led off with the tank, and here, I think might have been the game decider. We simply forgot to take the -2 for infantry and mortars shooting at the tank, though we did remember the +2 the tank got against rifle units. Eventually the Russians saw off the tank, and attacked the town with enough strength to take the place. But that victory was undeserved.  The tank ought to have been an approximate match for mortar and rifle company together, which might well have left the Italians enough strength, if the town were lost, to recover the place betimes. This one we'll have to do again some time. 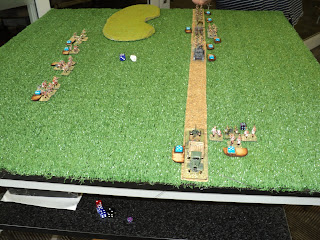 The final action, according to my gallery of pictures, was this one: an Axis column intending to barge past or through a small Soviet blocking force, when suddenly a second Soviet force appears on the flank of the column. The column comprised a tank company in the lead, followed by two Italian rifle companies, and anti-tank battery and two Romanian rifle companies bringing up the rear. 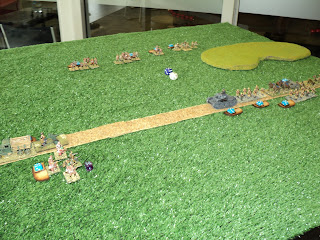 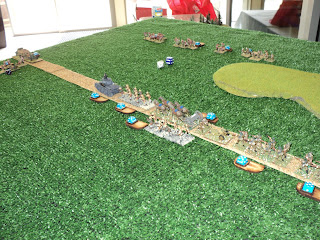 Probably the Russians had the ideal forces on this occasion.  Part of the column had to be diverted to hold off the flank attack, and part to deal with the road block. 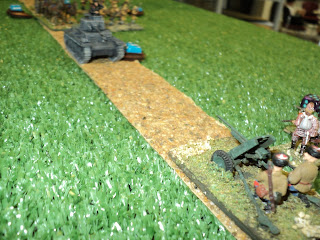 The axis forces never quite made it. Again, possession of the only mortar conferred a significant advantage. Possibly had the Axis forces gone all out to defeat the flank attack before turning their attention to the road block, they might have achieved a breakthrough. ...Maybe. 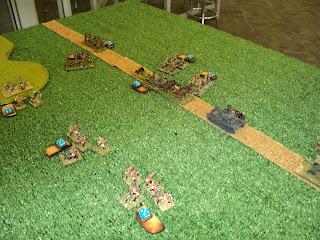 Altogether an enjoyable outing, a good lunch meal, and chewing the fat with old acquaintances.  But out of four scenarios, the Russians received not a single tank!

Posted by Archduke Piccolo at 2:06 PM