A couple of recent pics...

A not very successful recent photo: 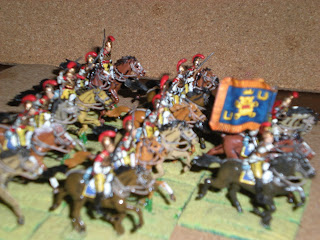 The Rijkswacht te Paard, in the service of Ursaminor, riding by...

Yes, that is a Teddy Bear you see on the flag. The heraldic description of the flag (according to the Bjornburg College of Heralds) is: 'Azure, an Ursus Theodorus or crowned or displayed'. The army was originally made for my daughter (begun at least a dozen years ago, more or less completed at the time the early photo were taken (see earlier posting), but undergoing a slight modification lately: in particular expanding the artillery to 2 field companies of 2 guns each, instead of the one with 3. Earlier painted yellow, the guns have been replaced and painted crimson instead (I took a reasonable photo of a field company and promptly lost the picture).

I long ago discovered that the best material for flags is paper: hardwearing, colourful and translucent (light seems to shine through the white and yellow bits (argent and or) as seen from the dark side, and I like that). I also prefer to make my own, although with historical flags that have complicated designs, I'll download and print flags instead.

Making your own has this advantage, though: you can draw them up as joined parallelograms or rhomboids, instead of rectangles and squares. This makes them 'drape' a lot more easily and 'realistically' - and they look more 'flaggy' that way as well.

Finally: the fringeing. This was done simply by drawing the fringe, as one would, with ink, but then going carefully around with scissors cutting where you have drawn. The effect is surprisingly convincing, I find...