Staying with the smallest of the Imperial States, herewith is a map of the Principality of Ursaminor. As can readily be seen, the country is not large, comprising some 7 major towns, and maybe 30 villages in all. 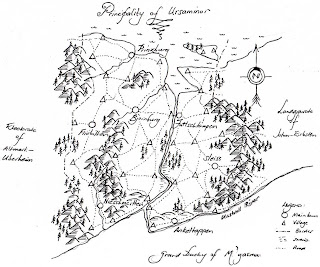 Surrounded on 3 sides as it is by neighbours more powerful, it survives partly by the wit and wisdom of its Diplomatic Corps, the skill and professionalism of its Army commander Marshal-General Gustav Adolph Torstensson, and the unsurpassed popularity of it monarch, the young Princess Ursula. When the ageing Emperor Violoncello, in an avuncular moment during a state visit several years ago when the Princess was three years old, offered Ursaminor his guarantee of protection, the surrounding princes were inclined to rethink their acquisitive ambitions in respect of undoubtedly rich and attractive portions of Ursaminor territory.

Of course, the claim of Jotun-Erbsten for the entire half of the valley on the east bank of the Unstroll River has been laughed more than once out of the Inter-State Law Courts, yet it remains merely dormant until the matter can be resolved by the arbitration of arms.

The claims of Altmark-Uberheim and of the Grand Duchy of M'yasma are more shrouded in obscurity and hence even harder to prove, though correspondingly less easy to refute. They too, not unaware of the Emperor's great age and increasing infirmity, await the tribunal of time to effect its judgement, the enforcement of which, of course, will devolve upon their respective armies.

All this begs the question of the Princess's steady resolve to preserve her patrimony complete and intact for the duration of her reign. In this she is ably backed by her chief advisor and plenipotentiary Graf von der Wiesl.

For all the political machinations among despots, there exists a burgeoning trade between Ursaminor and its neighbours. Bjornborg, the capital, is well served by its hinterland. The border market towns of Fliebitten, Nieschmeitten, Ankeltappen and Sleiss are all well placed geographically for foreign as well as local commerce; Futtschtampen is a thriving river port, and Prinzburg, although Ursaminor's sole sea port, also happens to be the only one of any size for a considerable distance along that part of the Baltic coast. Ursaminor even has a navy, its sole line of battle ship, the Rasend Frosch being the pride of the fleet.

Altogether, the covetousness of rapacious neighbours are not likely to be easily satisfied, but nor is it probably that it will diminish any time soon...
Posted by Archduke Piccolo at 2:56 AM