Ursaminor is (was) a small principality on the Baltic coast, surrounded by covetous, if not actively hostile neighbours. The country came into consideration in 18th century European politics when in 1995 I discovered at a swap meet a job lot of French Infantry - in particular the infantry that cam out of the Airfix Napoleonic French Infantry pack. There were 54 of them - a nice number to work with: the basis for 3 battalions. So I thought I'd build them into an army for my daughter, Ursula.
Here is the completed army in a rather fuzzy old photograph I've scanned into a jpeg file: 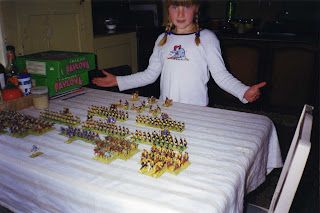 Added some spare British Grenadiers from the American War of Independence set, and I had a guards unit, and the 3 line battalions included a grenadier company each. Some home-cast figures that I had almost forgotten about formed the 5th (Norrbotten)Infantry. Finally several Revell 7YW figures gave us a Jager battalion.

At about that time I discovered the Italeri plastics, to wit: a packet of French Carabiniers. Superb figures! They became the Rijkswacht te Paard, the crack heavy cavalry of Ursaminor: 2 squadons of 6 troopers, plus the Regimental HQ of Colonel, flag-beare and musician. The Ursaminor horse was further made up of a unit each of dragoons (Revell), Uhlans (ESCI) and Hussars (Airfix) - rather an eclectic collection.

Finally, I had decided upon a single large field company of 3 guns, but this has since been upgraded to 2 field coys of 2 guns each. The result is as you see in these old photos (the only ones at the moment extant of any of this household's soldiery). Unfortunately, the Rijkswacht te Paard barely makes it into the picture... 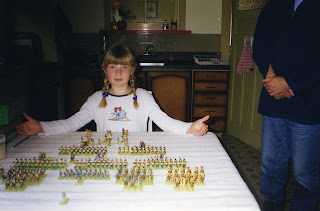 The complete order of battle of the Field Army of Ursaminor is as follows:

The HQ: Consolidated Grenadiers might need explaining. It is their to permit the option of stripping out the Line infantry grendier companies to form an extra elite unit. That would leave the line infantry with 22 figures each, and two elite units of 28. I really do like flexibility...
Posted by Archduke Piccolo at 10:13 AM