A comment on a recent posting, and a conversation yesterday with a friend I hadn't seen for quite a while (Gidday, Brian!), reminded me of the contrast in style between the old Airfix and ESCI figures and more recent manufactures.

I have always thought the best of Airfix were full of character - E.g. American War of Independence, WW1, some of the Napoleonics ... On the other hand, there was something bland about the ESCI. Yet I was to make an interesting discovery about ESCI figures. The Airfix figure design did not lend itself to mixing poses within a unit. You could get away with front rank of one pose and rear rank of another, but that was about it. Here's a couple of pictures of one of my Airfix ACW Union infantry regiments: 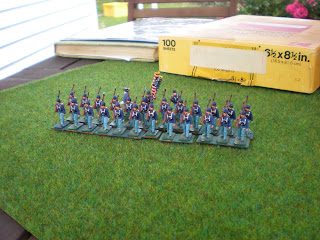 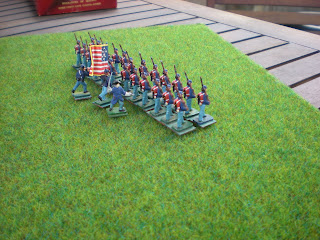 On the other hand, ESCI figures seem to cry out to be mixed in units, with as many different poses as possible. Here's the sort of thing I mean: 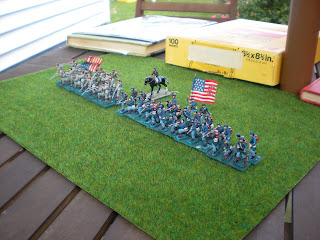 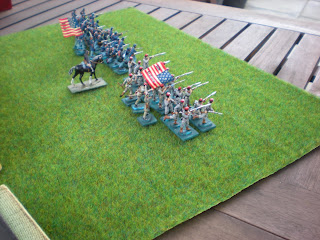 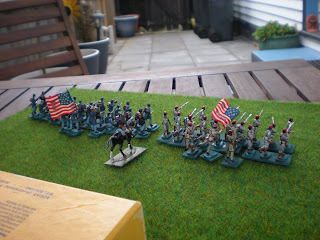 Actually, the cognoscenti will recognise that these figures started out in life as ESCI French Foreign Legion, but they make fine ACW figures.
The grey unit has been painted up as (Lew) Wallace's Zouaves - 11th Indiana - just so I could have a Union regiment in grey. It is also smaller than the usual run of regiments in my army, just 21 figures instead of 27...
Cheers,
Ion
Posted by Archduke Piccolo at 8:17 PM

Email ThisBlogThis!Share to TwitterShare to FacebookShare to Pinterest
Labels: Figures and models