This is a quick posting - a deal shorter than planned - outlining the second day of 6th Shock Army's offensive.  On this occasion, the battered 5th Mechanised Brigade had been pulled out of the line, and the rest of the Army's formations have been drawn in, supported by one of its Medium Artillery regiments.  I have in fact already played out this action, only to discover:

1.  An annoying 'continuity error'.
2.  A misinterpretation of one of the combat mechanics - so badly that the result can not stand.

The battle will simply have to be refought! O, the hardship! 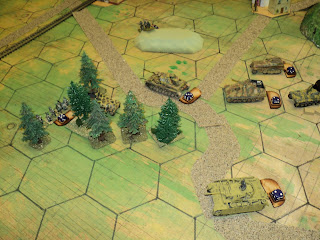 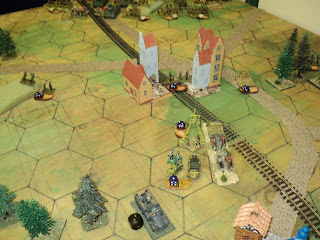 A note on Strength Points.  Rather than using SP by stand representing a battalion, I have adopted a more collective approach to the infantry.  Infantry, still representing battalions (more or less) are grouped by regiment, brigade or Division, with a base line of 1 SP per base.  The number of stands will correspond approximately to numerical strength, but the SP values will be adjusted by troop quality, equipment, and mobility.  Apart from the small 47th Rifle Division, the Soviet Rifle Divisions' SP have been reduced by 1 apiece in accordance with their status as conscripts. 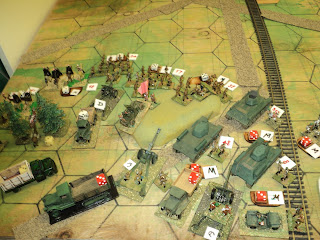 The observant reader might have noticed that the tank brigades of the Tank Corps all have SP=3, compared with the SP=4 or 5 of the Mechanised Brigade. This is in fact to represent numbers compared with the rather larger tank inventories in the Mechanised Corps.  The Heavy Tank Brigade in that Corps got an extra SP on top of that for its superior armour (KV85).  Meanwhile, 544th Grenadier Division, though fresh, is a very weak formation by German standards, qualitatively and quantitatively. 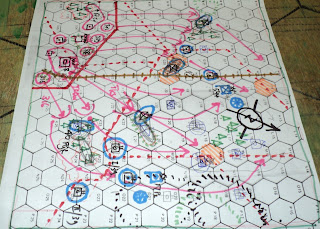 To the right is the table replotted onto a map.  Well, actually, the map was plotted first, and the table plotted from the map.  The pink arrowed lines purports to be General Popovitchski's battle plan.

Posted by Archduke Piccolo at 8:17 PM