More on ORBATS, scaling and such...

Wow!  A fair bit of feedback on my last previous posting. All good and fair points, although what they had to say served not so much as a corrective in terms of direction, as to impose some discipline to my thinking!

If I have a talent, it does not lie in the realm of originality. It seems to go more in the direction of running with the ideas of others, and taking them places the originator perhaps never thought of. That has quite often led me to some very interesting (to me) and thought-stimulating realms. In my view, that is a useful talent to have, but... it does have a downside. I was running with Bob Cordery's HEXBLITZ, along with Chris Kemp's NQM and and Tim Gow's Megablitz, and something else that has slipped my mind for the moment, into several parallel threads, all of different scales.  That 352 Div ORBAT in my view would make a fine war games formation - but not in the scale I ought to have been looking at for 'Jacko's' and my Operation Uranus project.  Thanks, guys, for pulling me up on that.

What that leads me to is this posting, which was planned for farther down the track.  Here I'll post my proposed ORBATS for the Uranus Project.  It is not cast in stone - some refinements may be required - though some refinements have already been made just for this posting.  I have left off the GoC, staffs and sigs and LOG/POL elements from the lists simply for the sake of brevity.

The following is the ORBAT in rather compressed form:

That will still be quite a lot of stuff to field in the table, and I really don't have enough SP marker holders, so a lot of the information will have to be carried by the stands... probably.

The Romanian Army (for which I can not supply pictures) I can list a little more formally, though still omitting Command, HQ and logistics elements:

As has been pointed out to me, this is quite a lot of kit to shovel onto one table - not a very big table, and all. With the German attachments the Romanians will be fielding 22 units (allowing for splitting the armoured units).  At that, they will be considerably outnumbered by the Russian hordes (Aaargh! 49 units!!)   Well apart from a slight reorganisation of Soviet tank corps to the following picture - and that will bring the units down to a mere 46 - we will have to bring in the 'board game' argument.  As the type of game we are looking at bears rather more similarity to board war games, I hope maybe we can 'get away' with these kind of numbers.
.. 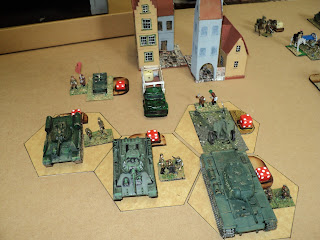 In these last pictures, I have formed the 'teeth' arms of a Tank Corps into constituent Tank brigades, each comprising one tank and one infantry stand.  Each brigade forms a single unit, that may not be separated, nor be stacked with anything else (there simply ain't the room). The infantry stand simply adds one to the SP value, and, I think, adds to the aesthetics of a tank brigade. These strike me as a good - possibly preferable - alternative to the earlier organisation shown.  The tanks of 1st Guards and 65th Armies will not be so augmented, however.  They simply represent the tank holdings of those armies, which don't appear to have been organised into Tank Corps as such. At that the 2 AFVs of 1st Guards Army represents just 2/3 of their actual inventory of over 160 tanks. 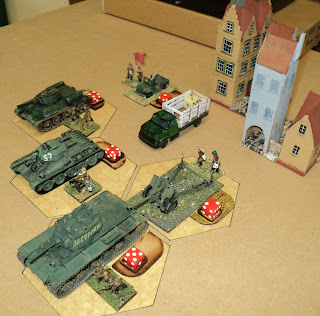 To change the subject a little to these last two pictures themselves, the hexagon shapes upon which the vehicles stand are intended as profiles for minor built-up areas for my hex-board. Such doodads aren't strictly necessary, but they go towards the look of the thing. The buildings forming the background of these pictures will do nicely as well. I began making these a zillion years ago at a time when I was vaguely considering (shudder) Volley & Bayonet*. Until recently I ignored them, but never quite threw them away.  The extra grey-walled buildings and the crazy paving I added a few days ago, and the pair have a nice little BUA effect.  They are permanent fixtures on their base, though. The profiles allow more temporary arrangements.

*  I don't really mean to disparage V&B.  That rule set is very popular among a certain set of local war gamers, and that argues considerable merit.  But for some reason, I simply could not get my head around its mechanics and conventions.  Strange.

Posted by Archduke Piccolo at 3:15 PM