Such were the headlines that blazoned the Moniteur at the beginning of April, 1810. Zaragoza had surrendered at discretion, but the determined garrison of Barcelona, despite two breaches being torn out of the crumbling city walls, were determined to defend the city to the last...
003 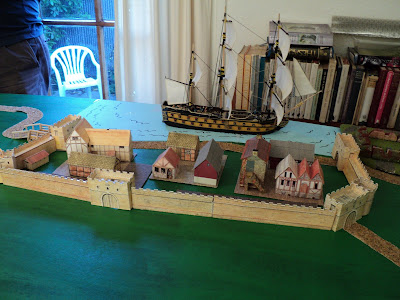 A view of Barcelona in more peaceful times... 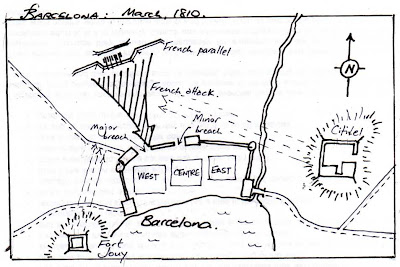 The map shows the city of Barcelona, flanked by the Citadel to the east, and Fort Joie hard by the town to the southwest. Heavy siege batteries in both places were still active. Though those at Fort Jouy was largely masked by the city walls against an attacker coming from the north, the Citadel guns could reach two-thirds to three-quarters across the north face. That left a fairly narrow corridor through which the assaulting columns could advance, safe from the heavy ordnance in the outlying works.

However, as these were served solely by artillery, the French commander, General Suchet, decided to take the city by storm, leaving the more heavily fortified fortifications to 'wither on the vine'. He had available some 5000 infantry, a single battery of 8pr guns, and 1200 light horse. Besides the single battery company in the Citadel and in Fort Jouy, General Giron, commanding the garrison, had just 2200 poorly trained volunteers and militia, and a company of 8 light guns. 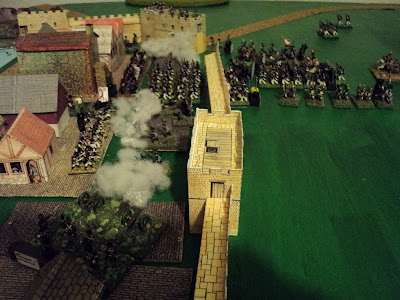 General Suchet opened the ball with a powerful attack in depth upon a narrow front. Supposing (rightly) that the breaches had been mined, he elected to storm the wall beside the major breach near the North-West tower, ignoring completely the minor breach in the centre of the north face as too hazardous to approach under the flanking fire from the Citadel.

Gen. Giron declined to defend the walls, instead placing a garrison in each of the Western, Central and Eastern Districts. A fourth small volunteer battalion he kept in reserve hard by the Eastern District, behind the light guns placed to enfilade any attacker who crossed the walls. The maze of streets in Western District, just behind the major breach, proved to be extremely tough to attack, and although the first to come under assault, it's defenders held out for a very long time.
Fall of the Central District
007 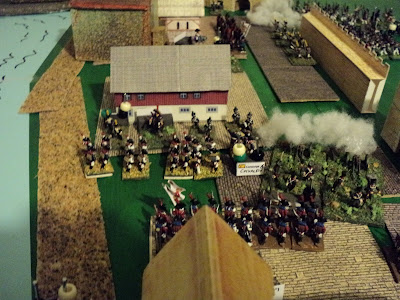 A battalion sized attack cleared the Central District surprisingly quickly, though only after a stiff fight. This left the flanking Districts isolated from each other. Rearranging his forces, Giron flung his Eastern District garrison in a spirited counterattack that, to everyone's surprise, recovered the lost ground.
Spanish counterattack recovers the Central District (briefly)
010 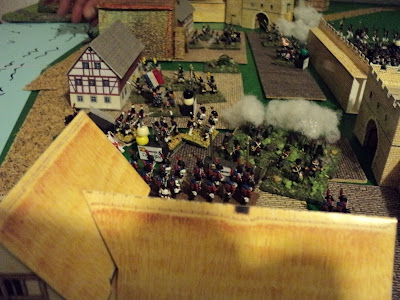 Before this unexpected success be consolidated, a renewed French attack flung the Spanish out again. With the scattering of this battalion, Giron was forced to deploy his last battalion in defence of the Eastern District.
It was shortly after that that the Westen district finally succumbed.
With two-thirds of the city in his grip, Suchet prepared with care his attack on the District remaining in Spanish hands. Left with a single small battalion of volunteer militia (400 men - 4 stands), Giron determined to fight to the last. The other three battalions had scattered among the streets and alleys of Barcelona; his guns had been overrun. It was a brave 400 that stood to meet the final assault.
The final assault
011 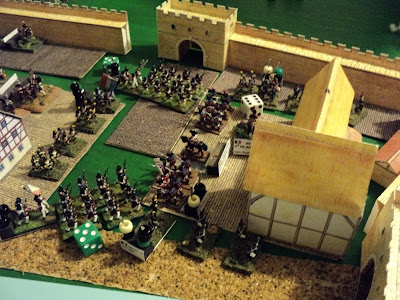 It was a fitting climax to the day's action. Four battalion columns stormed into the Eastern District, and were met by a withering storm of musketry. Losses mounted sharply on both sides; nearly half the Spanish defenders fell, but took an even heavier toll upon their assailants. Appalled, the French fell back to regroup.

Before they could renew the attack, however, a ragged Spanish militia officer approached with a flag of surrender. General Giron had been severely wounded, and, for their bravery, the scant remnants of the defenders had had enough.

The French were jubilant. Barcelona was theirs.
Posted by Archduke Piccolo at 12:29 PM 4 comments:

To resume the pictorial narrative, we begin with a general view looking north. Close to, the regular light infantry wait patiently for the attack by enemy horse and foot. Though safe enough for the moment in their orchard, thay can contibute very little to their beleaguered comrades in the town.
016 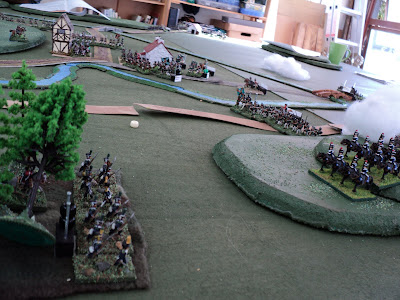 In the middle distance, three Spanish battalion columns prepare for an assault to drive the French out of the town, and hence leaving the way clear for McCullagh's command to break free.
017 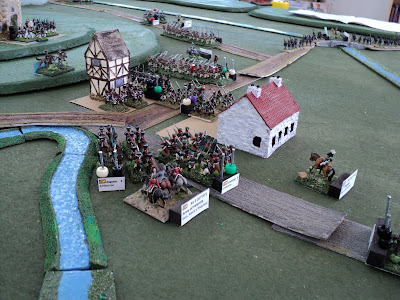 Alas for the Spanish, the assault fails to achieve more than a slight weakening of the French garrison at the price of heavy losses. One attacking battalion breaks and flees out of the town (purple bead).
020 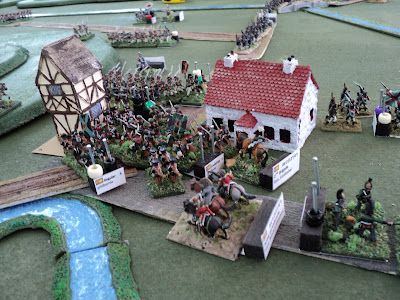 The second attempt to clear Castalla of Frenchmen. The defenders hang on grimly. But each assault weakens the garrison. It can not hold forever.
021 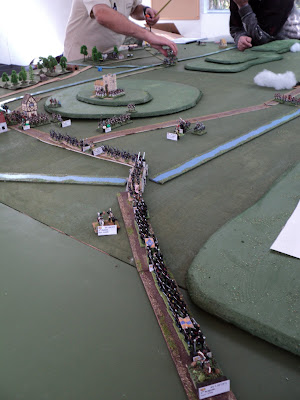 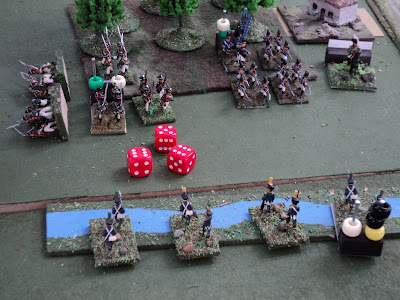 1st Ultonia and 2nd Alicante, having chased the French light infantry out of their orchard and across the small stream between groves, are surprised when the latter turn upon their pursuers. Slightly ahead of their comrades, 2nd Alicante bear the brunt of telling French musketry, losing two stands.
023 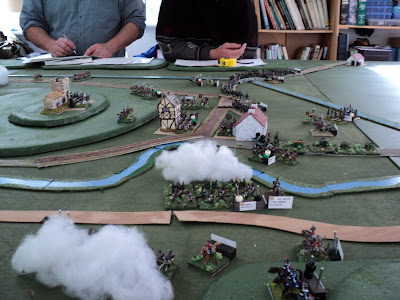 Can artillery blast the French out of Castalla?
026 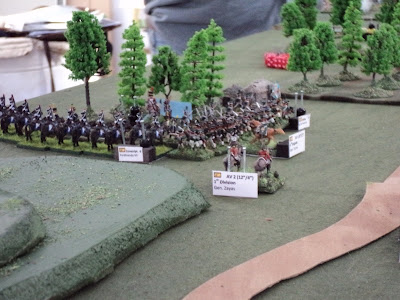 Attack upon the light infantry defending the east orchard. Though taking losses, the French throw back their opponents with ease.
028 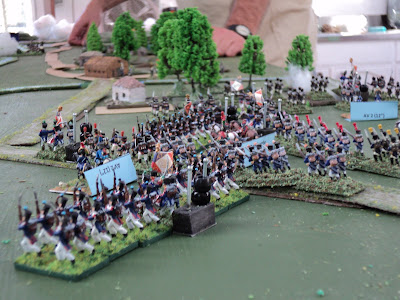 Delaborde arrives witgh his Division. Now McCullagh is in trouble, caught for the moment between fires. As for 1st Ultonia and 2nd Alicante, even if their comrades escape with the guns, these two battalions are doomed... unless they scatter and the survivors nake for the hills...
029 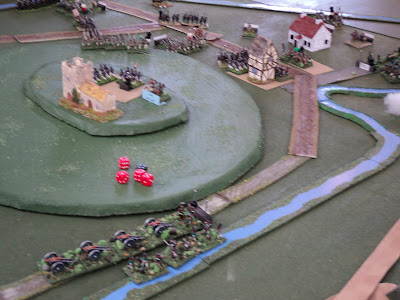 The 'lost battery' approaches the town ... still firmly held by the French garrison.
031 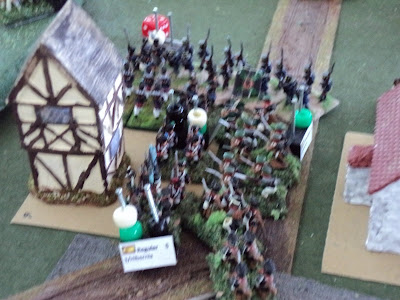 At last success! A third assault pitchforks the much reduced garrison out of Castalla. One company rejoining its parent battalion in the castle; the 200 (2 stands) remaining of their sister battalion falls back south of the castle. The road now lies open.
032 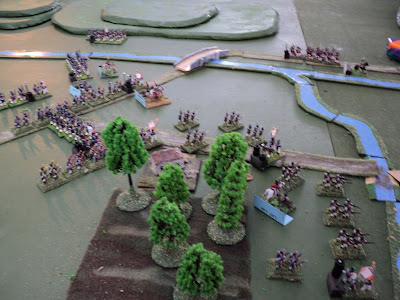 The general advance of Delaborde's Division. But it's too late. The enemy are able to make good their escape.
In this, the first action of the campaign, the Spanish took much heavier losses than did the French, but they could claim a solid strategic success: they saved the guns.
Posted by Archduke Piccolo at 12:00 AM No comments: 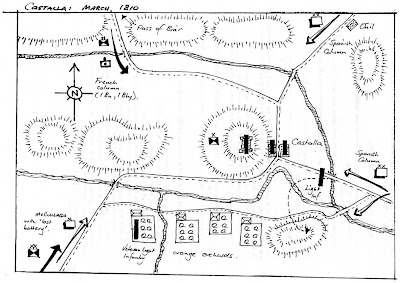 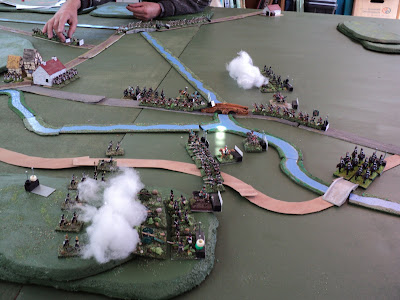 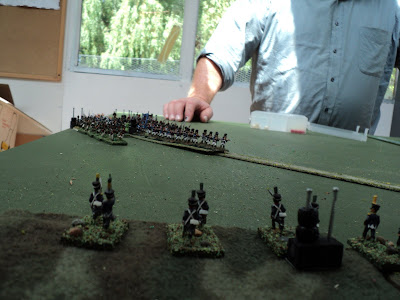 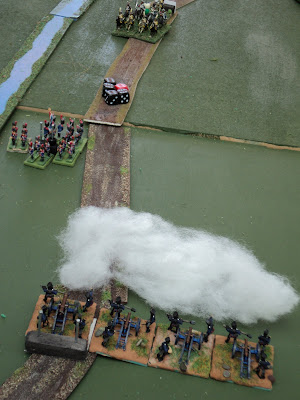 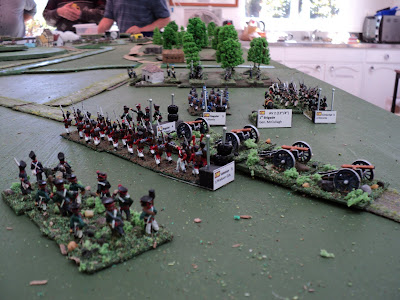 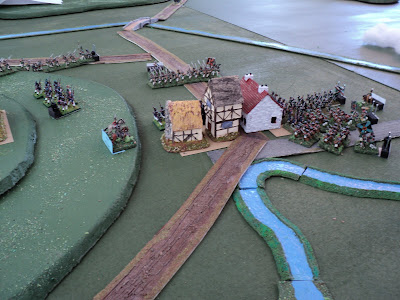 T0 be continued...
Posted by Archduke Piccolo at 8:46 PM No comments: