I've just read Bob Cordery's blog, to discover he had planned a Waterloo game using the PW game system. I had the same idea for my own hex board, and have even done some work by way of preparation. Seems even we two weren't the only ones with the same or similar idea.  Such as this battle map of my table - 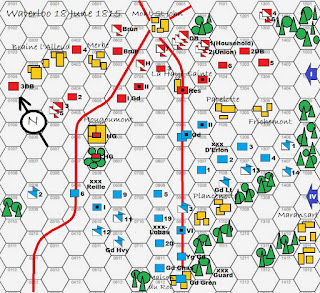 I haven't yet made up my mind about depicting the slight elevation of ground along the Allied position or where the front-line French artillery are located.

This would probably be very much a play test, to see whether the thing is really viable on my hex-board.
The forces are quite large in terms of the Portable Napoleonic Wargame, larger even than my earlier Battle of Wavre.

Orders of Battle for Waterloo:

Totals:
15 Units: Median = 8, Activation scores 6-10.
104 SP: Exhaustion point = -35SP; Rout point = -52SP.
The Prussians arrive from off-table, requiring a die roll for the first elements to arrive. The IV Corps of Bulow arrives first at via the two clear hexes where the 'IV' arrow indicates. After IV Corps successfully rolls for arrival, then I Corps begins rolling, arriving at the 'I' arrow's two clear hexes. At the moment, I'm thinking that both Corps need a '6' to arrive.

Although I have given complete orders of battle for the two Prussian Army Corps, it is very unlikely that the battle will last long enough to bring on even the whole of IV Corps - the first to arrive. They are included for the sake of 'completeness', really.

'Command units' (formations)  are defined by colour bands, and are generally Divisions (or Division-sized Brigades in the Prussian Army). There are, however a number of single stand 'independent' brigades in the Anglo-Dutch army. They are treated in the same way as multi-stand command units.

Not all formations have commander allocated: the French Imperial Guard and the Allied Reserve 'Corps' being two that don't. These formations are 'commanded' by the Army Commander - with, of course, the attendant problems!

The French Army has a lot of commanders, in particular of the three Cavalry Corps, which are quite tiny formations. This will probably make the French cavalry pretty flexible and nippy compared with other formations.

Finally, I have no real idea just how practical this is! I feel it ought to work OK, but won't be hugely surprised if it doesn't.
Posted by Archduke Piccolo at 4:12 PM 3 comments:

Tenente-Coronel Colonel Joao Pablo Relaxado was surprised and taken aback at the first sight of the place within which the remnants of the m'Butu army sought refuge. Whatever lay within this town - Kachinga, he was to discover its name to be - this was no zareba or palisade-surrounded settlement but obviously a sizeable town, enveloped by regular walls of masonry.

'Who knew the Romans were here before us?' a member of Relaxado's staff was heard to murmur. Only whispers - largely dismissed as fantasy - had previously been heard, back in Vertiginus, of a 'great Zimbabwe' somewhere upriver. It was no creation of the Romans, but rather the cooperative labour  and time spent by the several and disparate peoples who made up the townsfolk.

Although this place fell within Barra Kuta's realm - for which privilege they paid a none-so-very onerous tribute - it was not especially a m'Butu town. Barra Kuta might have made it his capital, but for its vulnerable - and from his point of view, remote - position on the very fringe of his kingdom. It was the equivalent of a sea-port, lying at the point at the confluence of the navigable branches of the Limpopo, and the midpoint at which several trails met. The place outrivalled in importance even the great market town upriver on the northern branch, Bombasa.

The Colonel quickly set aside his momentary awe - a sentiment not likely to last long when a colonialist set eyes upon indigenous artifacts not made of gold - and bethought himself to storm the place at once, practically off the march, and 'bounce' the m'Butu out before they could organise a defence. The walls, though strongly built, were not so high they they could not be scaled with the resources to hand (how to slide out from under a narrative difficulty!). Relaxado could already see the commercial potential for this place integrated into New Azeitonia, simply as and where it was, but for the addition of an administator and a few colonists: a market town and river port.  Giving strict instructions that whatever buildings and unarmed people found in the town were to be spared all harm - under pain of dire, excruciating (probably literally) and likely to be fatal penalties - he ordered the attack.
My original plan was that in fact this place, though sizeable, would be defended by thorn hedges and palisades. But I suddenly bethought myself of the Usborne Roman Fort that I had built years ago, and never used. Why not? thought I. There is no especial reason that the indigenes of the region could not have constructed such a place - or even that it was not the construct of a cooperative enterprise. Mentioning this to Karen, she referred me to the Great Zimbabwe. Of course, we also have the Great Wall of Morobad by was of wargames campaign precedents!
So, some special rules had to be devised for the storming of the town. First, I figured that the guns available to the colonists would be too light to make much impression on the walls, but could be used against the defenders lining them. However, the gates being wooden could be breached by gunfire (a 6 being required). Using whatever means came to hand, the attackers could scale the walls, requiring an unmodified 6 to effect an opposed lodgment; a 5 or 6 unopposed. If the gates were breached, however, they could be stormed as though there were no obstacle. I hoped, then, to make the emprise tough, but by no means impossible.

And then I went and gave the colonists a big hand by forgetting that when combined with the 8SP (strength points) garrison, the 37SP m'Butu that had survived the battles along the Limpopo Trail would garrison the place with 45SP.  So 37SP of m'Butu were left to defend the place:

Unfortunately, my information of the composition of the Azeitonia expedition is rather less exact.  This is the approximate force:

Colonel Relaxado was not one to wait around too long to attack. Opening up a bombardment of the eastern ramparts with the gun aboard the gunboat and machine guns, the Azeitonians approached the east-facing wall with some deliberation, whilst part of the army, together with the field artillery fetched a hook around to the south face. Once offered a clear sight of the wooden doors to the gatehouse in this part of the wall, the field guns formed battery and opened fire.

Blessed with few firearms, and those few effective at only short range, the m'Butu manning the walls could only wait until the attackers got close, but even with the protection of the walls, the incoming was a deal thicker and potentially more lethal than the outgoing. Time was of the essence for the attackers, who were, as soon as they were prepared, ordered to storm the walls. These walls were of no great height, and were scaled by the few ladders and ropes eked out from the boats, brushwood piled against the walls, lifting men up upon the shoulders where they could just reach the crenellations, and finding handholds where the masonry was loose.

The first attacks against the south face were quickly repulsed, the assailants driven back from the walls.  The attackers against the east face, although maintaining their pressure, were also finding it difficult to effect a lodgment. Casualties began to mount.  Undiscouraged, the Azeitonian regulars and legionaries returned to the fray. Just as one platoon burst through the splintered remains of the south gate, the platoon to their left surged over the walls, driving the m'Butu into the town.

Now, the interior of the town featured a clear space under the walls surrounding the built up area.  This meant that the attackers, having crossed the walls, counted as being in the open if attacking anyone within the built up area. The m'Butu were therefore able to counterattack with advantage. They succeeded momentarily to drive some colonists back over the wall. But the town gate remained in Azeitonian hands.

Meanwhile, the pressure on the east face, beginning to the left of the East Gate (southern end) soon extended to the other side of it.  There the defenders were thinner, having to reinforce betimes the southern end of the line. The Azeitonians succeeded in battering their way over the walls and driving the defenders into the town. Such success that the defenders achieved in recovering the ground was as quickly wiped out as the attackers, with vaster resources, came back as strongly as before.
At last, the southern wall completely overrun but for the Southeast Tower, and the northeastern quarter also forced into the town, the m'Butu gave up the fight. The afternoon sun was close to setting. Having reached their exhaustion point, they fought on for a little longer just to hold, but with counter-action now out of the question, it was clear that the numbers the enemy had would lead to much higher casualty rate among the defenders. Quickly arranging a delegation of townsfolk (a master politician to achieve that amid the chaos of an urban battle!) to approach the Azeitonian commander, the Chieftain-King signalled his men to evacuate the town to the west, grab what floating craft they could along the riverbank and make off upriver. There was no effective pursuit.

All things considered, Barra Kuta was inclined to think that matters could have gone a lot worse than they had.  True, he'd lost the town. And a lot of people over the last few days. No surprises there, but he had made the Whitefella pay heavily for the town at least. In fact, the Azeitonians had lost 20SP in the assault; the m'Butu 13SP in defence. But in fighting for it, Barra Kuta had established a moral proprietorship should ever the opportunity arise that he might recover the place.

It had been a dearly bought success for the Azeitonian expedition, but the Colonel was not altogether displeased with the outcome. Although the soldiery could only with difficulty be restrained from the victor's right to sack a fortified place taken by storm, Col Relaxado had no desire whatever to alienate the local population, especially as they would be required soon at least partially to make way for entrepreneurial Azeitonian colonists. He could see a great future for this place, one to rival the coastal town of Vertiginus. It would not do to begin with a sack, a massacre and a conflagration.

Despite the disparity of losses in this battle, so far the scale of SP lost or recovered during the course of the campaign so far goes like this:

I've still not decided upon the return of the temporary losses. Paul recons the fist ones are due back by now. Seems a bit soon for mine... All the same, the m'Butu remain yet a formidable force in being...