The first battle of the insurrection in Gatonegro could scarcely have been less sophisticated in its execution, but there was no denying its ferocity. As dawn broke over the dusty, scrubby plain south of Arabispo town, the Royalist lookouts could discern the steady approach of what looked uncommon like an army: uniformed and regimented, and even well enough armed. The insurrections were advancing in line, too, not something might expect of hastily trained troops.  (Fact is, it only crossed my mind later that the insurrectionists might have adopted columnar tactics.  On the other hand, the Yankee revolutionaries were not noted for tactics of that type...)
The Insurrectionists approached with Buzbar and Carryon brigades side by side. The leading four battalions were arrayed in order, from the right flank, 3rd, 9th, 5th and 10th; the second line comprised 4th and 6th Battalions. Sufficiently well equipped with muskets though they were, they were altogether lacking in horse and guns. Heavily outnumbered as he was, Don Lardo faced the oncoming rebellion with confidence in his well-balanced forces and the training of his troops.
So confident was he withal, that, retaining his militia to garrison the town, he advanced to meet the enemy. A point to be made here is that for this action I used 'priority' chits, rather than the 'median' system used in the previous action. There being a total of 14 units and command staffs (figures) on the table, the chits were numbered 1 to 14, and each turn shuffled and randomly distributed among the units.

This proved rather unfortunate for the Insurrectionists' right flank. The Royalist Lancia d'Esci drawing a high number on the first move swung off slightly towards the open right flank of the enemy line. The following turn, they drew low, and promptly flung themselves upon the line of 3rd Battalion. Had the infantry drawn a low number, no doubt they would have formed square. Whether we put it down to lack of training, lack or awareness or simply surprise - the infantry were completely overwhelmed. The pitiful remnants fled incontinently from the field. Just two lancer figures were lost.
..
With their blood up, and encouraged by their victory, the lancers plunged on, their target the reserve 4th Battalion some distance further on.

In the meantime, a savage firefight had developed in the centre. On their own, the 4th del Grado Regiment would probably have been outmatched by two Insurrectionist battalions, the firepower even, but numbers favouring the latter. But the Royalists had their artillery, and that made a big difference. They were also helped, as the rebels closed the range, by 5th Insurrectionist Battalion straying within range of some of the Loyalist militia in the town. 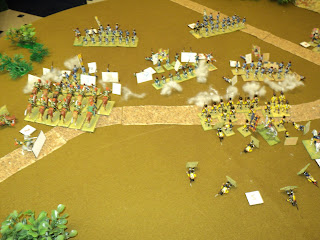 The fight was made the bloodier by the eagerness with which 4th del Grado closed the range. Ninth Cazadores soon broke, leaving a good half its numbers strewn about the field. The 5th Fusiliers were left desperately hanging on, until the 6th could intervene. That intervention brought new life into the Insurrectionists' main attack. It proved decisive. 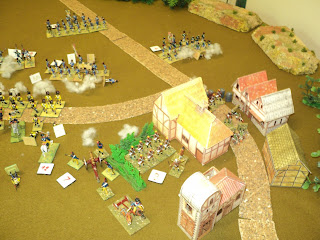 On the extreme left of the Insurrectionist line, 10th Cazadores found themselves in a firefight with a company of loyalist militia, who had barricaded the main street of the town. Getting somewhat the better of this action, the Insurrectionists began to think about a direct assault, to unseat the defenders.
Events had developed apace on the other wing. Emboldened by their easy victory over 3rd Battalion, the lancers surged on, to sweep into the line of 4th Battalion. Once again it was determined by the priority dice that the infantry would fail to form square betimes. All the same, the sketchily trained infantry gave a creditable account of themselves, and emptied many a saddle in the charge and in the melee.  It was to no avail, though. Having taken much the heavier losses in the melee, 4th Battalion soon followed their comrades of the 3rd from the field.


That victory proved to be the Royalist high point of the action. The collapse followed quickly after. Though 4th del Grado had carved great chunks out of two Insurrectionist battalions, the attack by another - the 6th - was the decisive moment of the battle. Fewer than half its numbers remaining with the colours, the Royalist regulars began to fall back in disorder. His lancers having not more than one charge left in them - if that - and the militia looking a bit battered as well, Don Lardo ordered the retreat to be sounded.

The Insurrections had won.

This was a very quick action - maybe three or four turns, not more. But you will see by the state of the stricken field it was no light affair for the troops involved. Of the Royalist forces, 4th del Grado lost 15 from 28, the lancers 6 from 15 and the militia 5 from 19 - a total of 26 out of 67 figures.
Not having the details by individual units, I can only estimate Insurrectionist losses at about 40-odd.  Greater numbers, and hardly surprising given the disparity in combat effectiveness, but heavy as they were they were proportionately less than the Royalists'.  The Insurrectionist Army had been blooded (as well as bloodied), and, having won their victory, gained in confidence.  They began to think of themselves as veterans...

Fairly deliberately unbalanced - certainly asymmetrical - I was surprised in the event just how near a thing this battle turned out to be.  Having said that, I'll probably have just one more action with the Insurrectionists counting as 'militia', after which they will be ungraded to 'line' status, They will also, of course, have acquired some artillery and horsed troops meanwhile... Oh, yes: and numbers...

Continuing the theme of the Gatonegro War of Independence, we hark back to the opening moves of the colonists and native rebellion against the oppressive rule of the Reine de Oro. The very name 'de Oro' derived from the vast treasures extorted and looted from the colony; with no appreciable benefit - not even defence against hostile natives (they having been effectively exterminated) - being returned by the 'Mother Country'.
The Europeian Imperial Wars of the early 19th Century impacted severely upon the Reine de Oro; that seat of Empire had been forced somewhat to relax its imperial grip, whilst yet increasing its demands upon the wealth of the colony. Grumblings in Gatonegro grew to dissent, then to frank disobedience and finally to outright defiance. The spark was finally touched off at Arabispo, where a wagon convoy had paused whilst carrying treasure to the seaport and capital, Gatorado. The attempt to hinder the convoy's journey in the morning of March 20th descended swiftly into attacks upon the few convoy guards, a massacre of townspeople, and  the discovery that during the fracas,  some enterprising townspeople and visiting peons had made off with a considerable portion of the treasure. Two of the score of wagons had vanished, and the pile of loot had appreciably diminished in at least a couple more.


Of course, the Gatonegrin  Vice-Regent could not be seen to tolerate such effrontery, and despatched a flying column to clamp his Imperial authority upon the town. Under General Don Lardo Bigboy y Pantalunas, a flying column set out for the week's march to Arabispo.  This column comprised;

On the way, this force picked up and included in its numbers:

Total, including the commander, 67 figures (at 1:20, call it 1,340 officers and men).  The regulars count as regular except the grenadier company (6 figures) counting as elite.  The Gatonegro loyalists count as 'Militia'.

Unbeknownst to Imperial authority, however, the seeds of insurrection had been sown long before the Arabispo incident. The Deputy-Mayor and Town Treasurer, one Jose de San Bartolomeo, had clandestinely been recruiting and pulling together an enthusiastic, if very amateur and sketchily trained, force of insurrectionists. Meticulous in organisation as he was with the Public Accounts, San Bartolomeo organised his little army into battalions and brigades. Though lacking on horse and guns, the 2000-plus strong force he has recruited he hoped would give a good account of itself, if presented with an opportunity.


This militia might never had been called out, had Don Lardo and his troops behaved with sufficient restraint upon their arrival in the Arabispo district. Launched more than reluctantly from his sybaritic existence in the Capital, Don Lardo was inclined to vent his resentment upon the townsfolk and local peasantry. Already exasperated, the local people grew desperate.  Within the week, San Bartolomeo determined upon calling out his militia to evict Don Lardo and his men from the town.  This militia comprised: