I have been awarded an award... twice!  Far out!

My thanks to Gowan Ditchburn and to Mike the Mad Padre.
I do appreciate your comments in re this blogspot.

Now, of course, I must reciprocate in some way.  Let's see what the instructions had to say:

"- Copy and paste the award on your blog linking it to the blogger who has given it to you.
- Pass the award to your top 5 favourite blogs with less than 200 followers by leaving a comment on one of their posts to notify them that they have won the award and listing them on your own blog.- Sit back and bask in that warm fuzzy feeling that comes with knowing that you have just made someone's day!- There is no obligation to pass this on to anyone else but it is nice if you do."

Now, I appreciate that there is an element of 'chain letter' to this exercise, but I've decided to take it at face value for what it's worth: some positive feedback from appreciative readers, and to acknowledge the enjoyment given me by the blogsters I've mentioned below.  Of course, these are just a few of many blogspots that have given me entertainment, inspiration and food for thought over the last two or three years.

- Gonsalvo at Blunders on the Danube - for a blog chock full of interest and useful info;

- Paul of Pauly Wauly's Wargames Blog in particular his well presented 18th Century Imaginations, but check out Pauly Wauly's Other Blogspot as well;

- Andrew of Random and Creative - an engagingly original extempore approach to wargaming;

- ...and Phil Olley for his Classic wargaming - for mine, a very nostalgic roam among the Classics of the wargame genre: Young & Lawford's Charge! and Charles Grant's The War Game.

Meanwhile, I'm still putting together the next instalment of the Ulrichstein campaign as it unfolded in  the Europeia of the Wholly Romantic Empire... 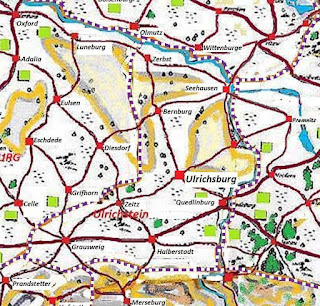