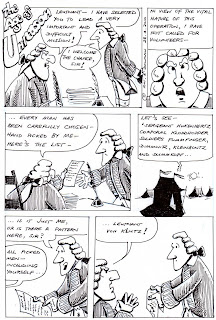 Posted by Archduke Piccolo at 7:53 PM No comments: 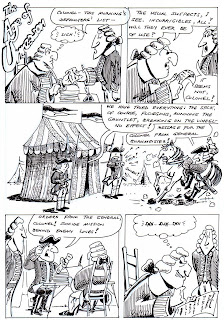 Just click to enlarge.
Posted by Archduke Piccolo at 5:49 PM No comments:

The following strip was my contribution to a book of cartoons and strips celebrating 1000 years of history of Maori and Pakeha (specifically English) ancestors of New Zealanders. Of course, something like 800 years of the latter take place in England. The strip is based very loosely on a real incident in the English Civil war, shortly before, I think, Marston Moor. 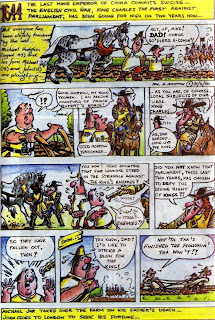 This has been reproduced from my copy of the resulting book - not the crispest, but readable. Click on the picture to enlarge - click again to supersize.
Posted by Archduke Piccolo at 4:12 PM 2 comments:

'Action in the Plattville Valley'

As an old wargaming buddy (Hi Andy!) was back in New Zealand for a visit and vacation with his family, we though we would arrange some sort of game at the Club (Woolston). As it turned out, time was short, but I had already decided on the pick-up game: the famous 'Action on the Plattville Valley' from Don Featherstone's book War Games (1962).

We could have used the Don Featherstone's rule set, but decided to use a rather abbreviated set of my own that I wrote some 20-odd years ago. We also made a few small changes. My infantry units comprise 27 figures: an HQ of 3 (C.O., flag, musician) and 24 other ranks. Artillery have 4 crew, but 2 guns in battery may have a further officer, a battery commander.

The big difference was in cavalry. My Confederate regiments were 23 strong (3 in the HQ again); the Union had 15-man battalions. To make up for this difference, one of the Union cavalry units was armed with repeating Spencer carbines. Though having a shorter range than the muzzle loading Enfields the Confederates favoured, they could lethal once they got close enough, as events were to prove. Finally, all cavalry could dismount, leaving about a fifth of their total as horse holders. This meant that Union battalions could dismount all 12 of their 'other ranks' with the command element of 3 also representing detached holders.

The action opened, as in Don Featherstone's account, with Kearney's (Union) and Pender's (Confederate) brigades marching along the Upper and Lower Pike roads respectively - hidden from each other by the eminence of Green Ridge. 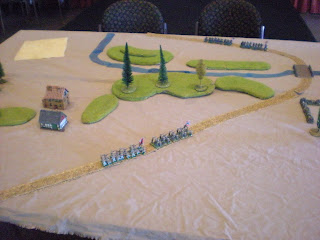 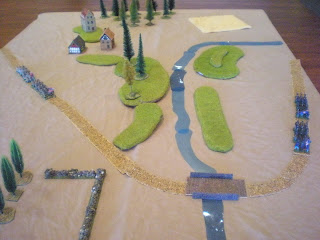 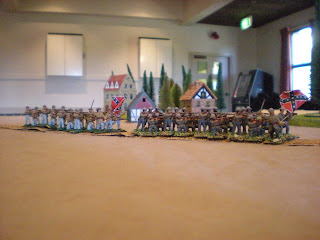 After two turns, the remainder of both forces entered the field, from anywhere along the base line. Pender's leading brigade advanced rapidly, 7th Texas as far as the defile between the Wheat field and Green Ridge, before falling back slightly to form line in the face of the approaching 10th Iowa. Pender's other regiment, 5th Kentucky, crested Green Ridge to see the advancing Union hordes, led by 2nd Illinois. 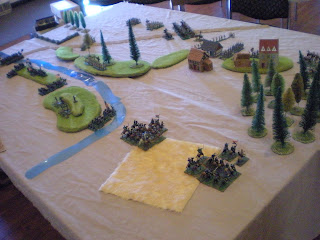 Masses of Union troops were concentrating behind Bull Creek, surging over Mole Hill and Rabbit Ridge. After an exchange of fire, 5th Kentucky fell back behind Green Ridge to await the support of Ramseur's Brigade (1st Maryland and 6th Louisiana) and the 2nd Virginia Cavalry. Meanwhile, the CSA artillery was mounting the southern spur of Green Ridge, as Gordon's brigade (18th Georgia and 2nd Mississippi) prepared to garrison the Plattville settlement. First North Carolina Cavalry entered the defile between Plattville and Platt's Wood, where they dismounted. 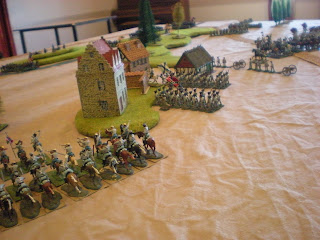 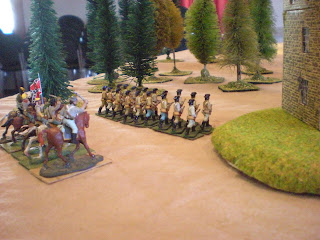 Planning his major effort to force Green Ridge, Union General Geo. A. Thomas brought Grierson's Cavalry Brigade to face the village, where they soon dismounted near the open field and formed a skirmish line. Little further happened on this flank until the day was well advanced.

Here is a panoramic view of the field: 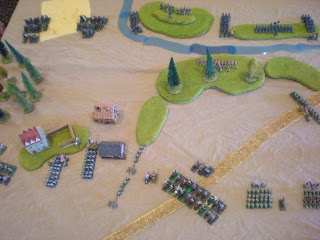 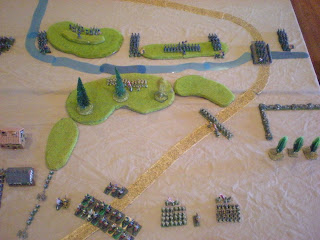 Although the Confederates got somewhat the better of the early exchanges in the battle around Green Ridge, Union numbers gradually edged them back, and it wasn't long before the Rebs were definitely getting the worst of it. Once the Union had 5 Regiments in the firefight, not only did the former outnumber the 4 CSA regiments, but consistently outshot them as well. The Confederate fell back, resisting step by step, but soon Pender's Brigade broke, shortly followed by 1st Maryland. The intervention of the Virginia Cavalry and the 12pr Napoleons of the Louisiana Washington Artillery failed to stem the tide, though 5th New Jersey was driven back over Bull Creek. As the sun dipped beyond the western horizon, the Confederate retreat had become general. 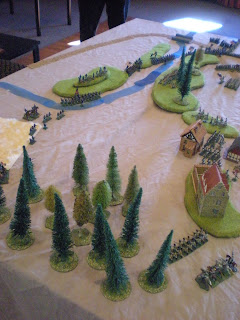 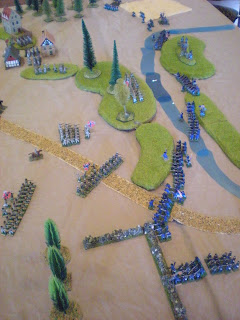 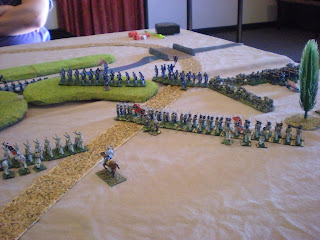 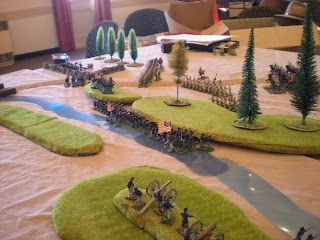 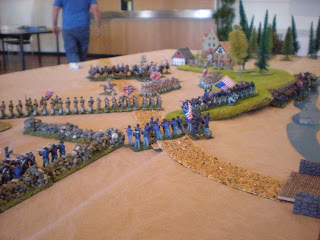 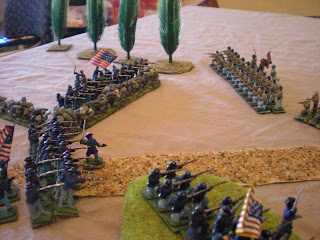 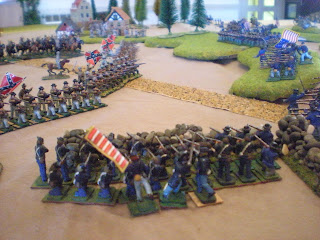 The action about the Plattville village became more lively when, at about 3p.m., Gen. Grierson received orders to close in on the place. This somewhat anticipated a Confederate move to drive off Grierson's troopers. Despite heavy numerical odds against them - more than two to one - and the superior range of the Confederate muskets, the Union horsemen got much the better of the firefight. The Spencers held by 1st Vermont Cavalry cut 18th Georgia about grievously. Eventually the Rebs acknowledged defeat here, too, and joined in a general exodus from the field as darkness drew in. 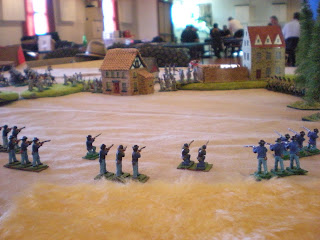 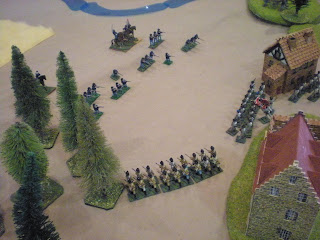 The final act was the opening salvo of Union artillery after crossing Bull Creek and deploying on Green Ridge. The Confederate rearguard had to abandon half its artillery as they exited the field. 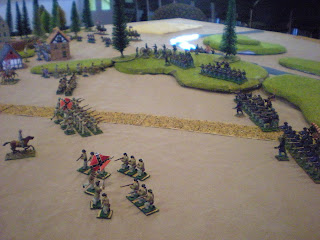 The butcher's bill made unpleasant reading for the Confederate High Command (Me). Andy certainly got the better of this one! Of 201 figures, 66 were no longer with the Union colours at the end of the day. Losses of about a third. The Rebels lost nearly half their 217: 101 remaining upon the field as the survivors made off.

All the figures and models used in this game were from my own collection - almost all Airfix, all painted twenty and more years ago. A few Atlantic figures might be seen among the 1st N.C. cavalry (rather skinny, but rather liked them). The Union guns were adapted from the Airfix Artillery set, which were 3-inch Ordnance (Rodman) guns. One was transformed into a 10pr Parrott by wrapping a short length of ball-pen reservoir about the breech; the other, with the barrel replaced by a length of plastic tube, became a smoothbore 24pr howitzer. The Confederates used Napoleonic British Artillery as 12pr Napoleon guns.
Posted by Archduke Piccolo at 5:23 PM 7 comments: 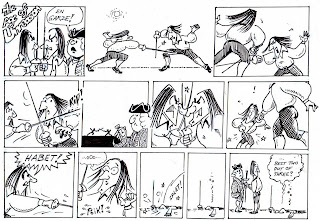 NB Don't forget to click on the image to get a larger picture...
Posted by Archduke Piccolo at 1:27 PM 1 comment: 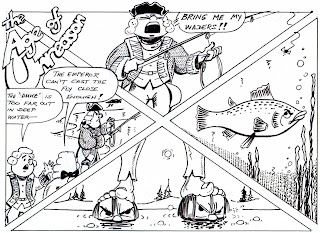