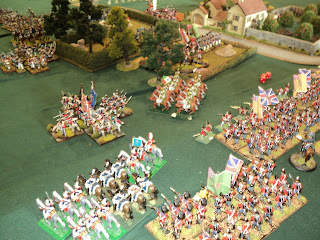 For this event quite a lot of figures had to be gathered from several collections, especially as we were to be using the General de brigade rule set, modified for this action.  To the forces involved, contributions came from Basil Moscovis, Mark Ottley, Mike Thorby, Paul Jackson, and myself. Richard Shields came up from Dunedin with several more figures from his collection. He was also resplendent as Prince of Orange in dress uniform for the occasion. I know that there were contributions from at least two others, but didn't discover who they were.

I was supposed to Napoleon for the weekend, but, still flattened by a virus that I'd already had for several days, didn't make it for the event as a whole.
On the Friday before the weekend I had laid out what troops were to be transported.  Entrusting the lads (some 520-odd with 11 guns) to the tender care of others for a couple of days doesn't come easy to me.  But in the event there were no losses, not too much damage, and I indeed acquired 6 extra figures somehow.  I'm not sure to whom they belong, but I think I can hazard a guess...  I stayed home, feeling like two ton of old fish heads, all day Saturday.  Finally, on Sunday afternoon I felt sufficiently recovered to crawl down to the club and observe the last hour or so. Whilst there I took some indifferent photos of the troops.


I was told that Lobau's Corps had been ordered forward from the 'Reserve Table' to exploit a success earlier won at La Haye Sainte, where Anglo-Allied defenders had been brought to the verge of collapse.  Unfortunately it took more time for the orders to take effect than had been hoped - their receipt, and action upon them, subject to a die roll.  So by the time Lobau was well on the way, the Allies had somewhat restored the situation, by the look.  At that I might have been inclined myself (who was also intended to play the role of Count Lobau in addition to Napoleon) to bring forward all thirteen battalions (312 figures) and 22 cannon (11 models) into the assault. But there was the small matter of the Prussians to influence the decision of the French command.

Having taken this many pictures, the day was already far advanced and pack-up had to begin at 4pm. Although not fought to a finish, the occasion was, I am told, enjoyed by everyone, and, considering the size of the project and the absence of formal game directors to keep people focused, the thing went off very well.  I was impressed by what I saw, anyhow, in the 90 minutes or so I was there.
Posted by Archduke Piccolo at 8:42 PM 17 comments:

June 7 2015:  Practice game using General de Brigade rules.  Since this action I contracted about as vicious a virus I have ever encountered, rivalling the glandular fever I got thirty years back.  Even after two weeks, I'm still not 100%...  Hence (in part) the delays getting these postings done.


This was the last practice battle before the big Waterloo game on the weekend of the 20-21 June.  I was supposed to be Napoleon for that event...