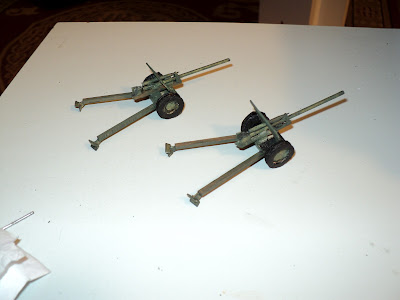 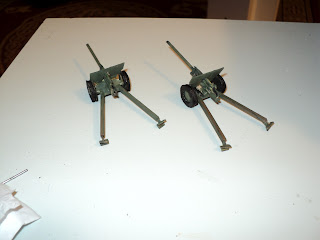 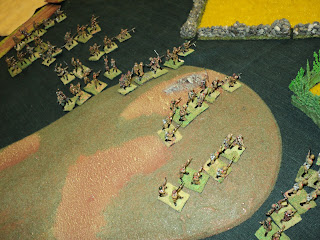 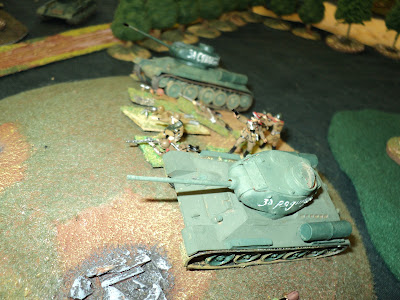 They deserve their 'Guards' appellation!
Posted by Archduke Piccolo at 5:22 PM 6 comments:

About 20-odd years ago, when money was short and time was long, I wondered how I was going to acquire the guns I needed for my Russian (or Pan-Andean People's Republican) Army.  A rather crudely scratchbuilt set of infantry guns didn't pass muster, though one of the more outspoken critics offered to lend me a metal field piece from which to draw up templates for scratchbuilding.  The first results you see here: the First Artillery Battalion of 1st Guards Mechanised Brigade. 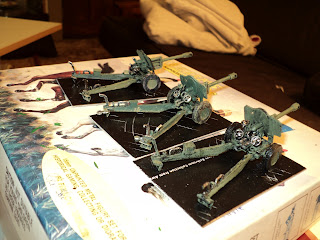 The middle gun in the line above was the first built, all from cardboard, chads, and bits of ball-point pen.  Even the wheels were cardboard, made up of layers that vaguely suggested a tread, and the outer circle having its centre cut out for a better representation of tyres and hubs.   That centre gun also has its towing assemby, a rather fiddly construction from thin cardboard (cereal packet), paper and a discoid section cut from the ink reservoir of a ball pen. 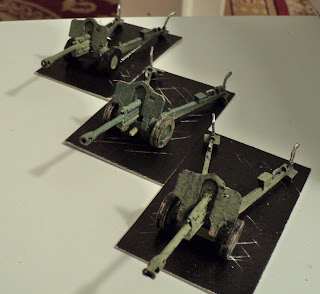 Finally, the muzzle brakes were fashioned, again from ball-pen ink reservoirs.  Trial and error suggested the best method was to sharpen a length of reservoir with a pencil sharpener, cut out square sections on either side, up near the blunt end, leaving a millimetre or two untouched.  Then shave off slivers top and bottom of the whole thing.  Then it can be slipped over the end of whatever you are using for a gun barrel.  For these guns, it was modellers' white plastic tube. 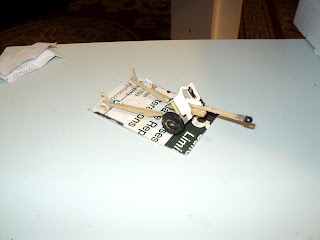 From what I've seen and read of Sovier artillery, I'm guessing this was an early war - possibly a pre-WW2 design.  Perhaps someone can correct me on this. 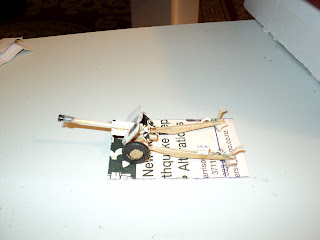 A fourth field gun, same calibre (76.2L39) under construction.  Until very recently I had not based them, slotting gun crew stands between and under the trail legs of the pieces.  Unfortunately, the construction isn't very robust, and even before the earthquakes, pieces had to undergo periodic repairs.  This usually meant retaching the legs.

A few years ago, I was given some spare parts from a number of gun, AFV and vehicle kits a friend had already assembled.  The easiest such conversions were the guns.  There were enough gun barrel and breech black assemblies to form a regiment (We're talking Command Decision, here) of 152mm Medium pieces. 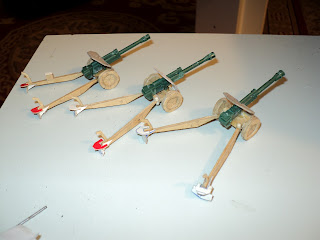 This is the way they have been for quite a while now - a few years at any rate.  Still a few bits and pieces to add. 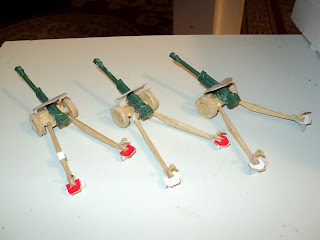 They will also get the same sized bases as the other field guns.  These bases have no meaning in CD terms, that being defined really by the base of the gun crew stand.

There was, however, just the one 122mm piece.  This one, though, I gave 'proper' wheels. 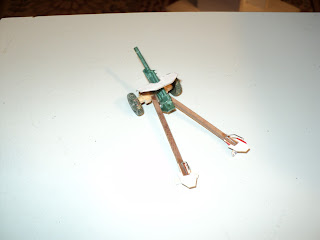 As it happened I had already made a beginning on a couple of other 122mm gun/howitzers, but hadn't worled out the breech blocks.  Incidental to a later picture you will see some of the bits involved.  Not much progress there, though. 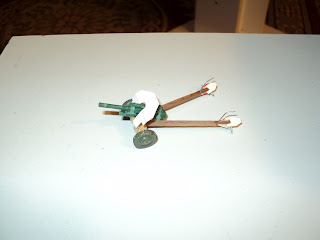 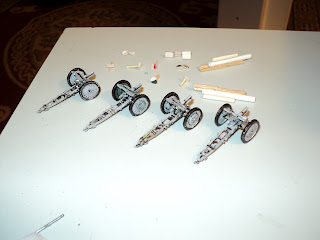 And now for some infantry guns.  This was really where I came in, trying to construct some of these small guns with, at the time, no worthwhile information on what they looked like.  A few years ago I acquired these white metal pieces at a bring-'n'-buy.


So far they have received no more than an undercoat. 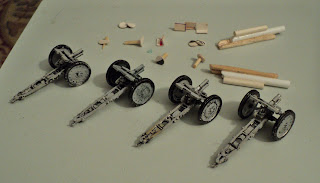 What formations will get these guns?  Probably some of the less well-equipped Rifle Brigades in my army, but the decision is still pending. 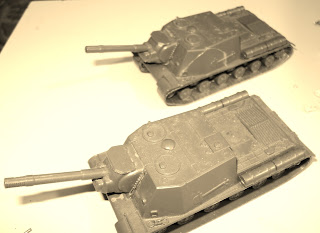 Finally: a couple of 'Quick-built' Italeri ISU152s.  Such vehicles features in a recent article in the Plastic Warrior blogspot, but they had different gun barrels.  I had forgotten that they came with alternatives.  I opted for the short barrelled guns with the 'shark-gill' muzzle brake. 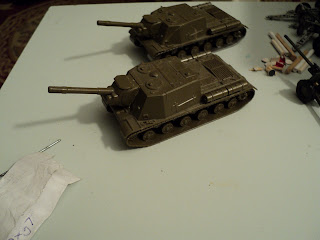 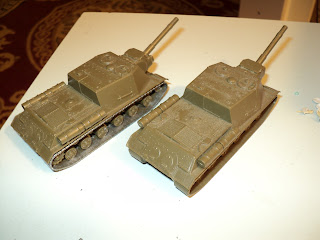 The earthquake damage to the far vehicle (above pics), though quite apparent in the b&w picture, turned out to be quite easy to repair, and will be completely hidden by a paint job...

...once they have been dusted off!
Posted by Archduke Piccolo at 9:21 PM 13 comments: