It is amazing sometimes how, in the middle of a project, it begins to accumulate stuff almost of its own accord.

To begin with: a couple of vehicles and a little something else from 'A fist full of plastic' Brian.  Over-scale for his own projects, they are slightly under-scale for mine - which means, of course, they are just right.  The TEXACO label has to come off, as you'd expect, and the vehicles will be painted some sort of military colour- 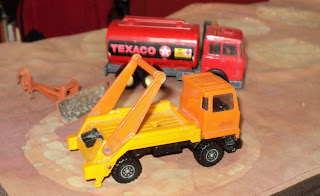 I was thinking of putting a tilt on the flat-bed truck and removing or disguising the crane.  I've changed my mind.  It will be left as is, a supply vehicle, with the crane handily in place.  Very inventive, these Raesharn. The dozer blade will most likely be attached to a cardboard scratchbuilt bulldozer, and attached to an Engineer platoon. 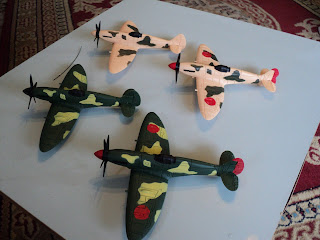 Meanwhile, the search has been ongoing for aircraft.  I thought the Disney 'Planes' merchandising might supply suitable war birds, but what I have been able to find in that line are too small.  However, I did find these. 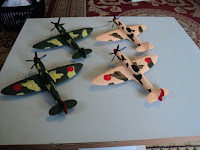 Made in China (isn't everything these days?), they are obviously modelled  on the WW2 Spitfire, and come as simple kits in about 1:72 scale.  About 10 pieces, including a 'friction' motor, clip together, and a small screw holds the motor in place and the whole kit together.  The thing comes with its own little (Phillips) screwdriver as well (I now have 4 of these).  The colours are the tan and green and the green and yellow as shown above. There are no decals. Still, at $4 the time, they seem to me a snip.
These are toys, but with a certain something.  I painted the spinners and rudders red, added the White on red roundels (still tossing up whether to add a sable device within the white circle), and the numbers on the fuselage.  Mathematicians among you might discern a pattern in the numbering.
To outline the details I washed overall with Nuln Oil, wiping off the surplus before it dried.  Although it adds a grimy effect to the whole, methought that it gave the aircraft more character somehow.

The green guys I haven't outlined, though I probably will around the yellow patches.  I find the added red and white details - though simply painted on - have a very handsome effect on these green aircraft.
On a whole different level, friend Brian also shoveled my way some magazines.    The Military Modelling ones I already had, but I'm glad he did, for, flicking through one of them, I found this (see infra):
Scanning the page onto a picture file, I resized the thing from 1:35 scale to 1:48 and printed it to provide a template for the parts shown.  Five little Beaver Bug armoured cars are now in production for the Army of Kiivar.  Most will be armed with a light cannon and a co-axial machine gun. At least one will have twin-MGs instead, I think.
Reorganising and relocating my stuff, I've rehoused my Jono's World navies into one box.  At the top is the exiguous Kiivar Navy; in the middle the colourful Navy of Saabia; and the sinister yellow and dark grey belong to the Raesharn Imperial Kriegsmarine.  At the top right hand corner are landing craft, a few aeroplanes, and several merchant vessels.

On a more general note, here's a box of Jono's World trees, hacked from an abandoned artificial Christmas tree.  I was originally cutting them off a stalk at a time, but I have discovered that with a bit of effort I can cut them nearer the stem for larger trees with actual branches.

Continuing to build some sort of infrastructure for the 'Jono's World' project, one needs of course a place of worship.  The limits to my imagination and constrictions imposed by modelling skills that will carry me so far and no farther, led to to construct this ecclesiatical edifice - rather more Western in style than I would have preferred.  Never mind. 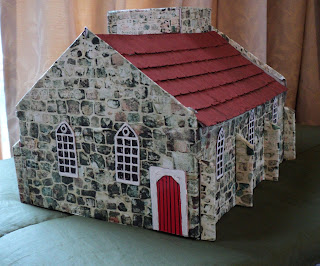 As usual the construction is from cereal packet and stonework pattern printed on paper. 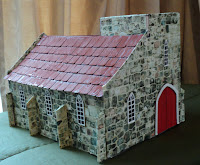 The thing was simply constructed from the bottom parts of two cereal boxes glued side by side.  One was cut in such a way to allow for the addition of the corner tower. 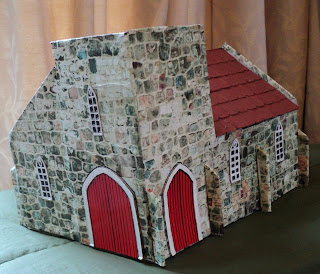 The stone pattern you might have seen before in earlier articles on this subject.  However, this time I altered the colour, giving it a more yellowish tinge before printing.  The doors and windows were made from what was left of the cereal packets and simply glued on.  The doors are 'self coloured', that is to say, I cut them out from bits of box that were a solid red colour, and then glued a door frame over it to give a 3D effect.  I drew on the black lines to suggest timber doors.  Not sure yet what to do (if anything) about door handles. Door and window frames were painted white. 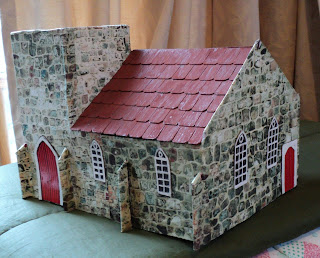 I made the roof lift-off-able so that the interior of the thing could be used to house a garrison (not important) and to provide storage space for figures or models (very much a consideration).   This is actually quite a large building model, with a 'footprint' of 23cm x 17 (not counting the 'buttresses'), and a height of 17cm.   Note that the thing is designed with function very much in mind as much as form.

At this point I reckon the other constructions I have in mind for this project - Town Admin/CBD block, Aircraft hangar, Airfield control tower, and maybe some further vaguely 'Industrial Wasteland' type impedimenta - can wait a little.  All I have to do is wait until the weather improves for these to be taken outside and the war to begin...
Posted by Archduke Piccolo at 4:47 PM 22 comments: